Is this the face of the ruler who appointed Joseph as his chief executive? 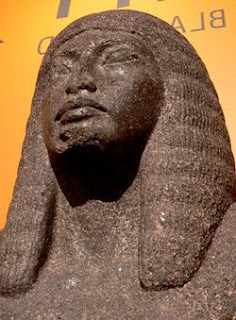 Who ruled Egypt when Joseph came to power?

That question has perplexed readers of the Bible for many generations. Different answers have been given based on the dating of Joseph and the alignment of his life with the reigns of at least 15 rulers. Some scholars believed that Joseph's rise to power took place over an extended period, rather than the brief time described in Genesis. Abraham Malamat (1922–2010) believed the story of Israel in Egypt and the Exodus represents events over a prolonged period.

Based on the best calculations I can give, I place Joseph in Egypt at a later time. I believe the ruler of Egypt when Joseph came to power was Horemheb who reigned from 1306 until 1292 BC. He was the last pharaoh of the 18th Dynasty. He was married to Nefertiti's sister, Mutnodjmet, who died in child birth. Horemheb means "Horus rejoices."

Horemheb was born a commoner. He was promoted to a high military rank during the time of Akhenaten (c. 1353–1336 BC). Akhenaten elevated Aten above the other gods and reduced the power of the temple priests who were not in the service of Aten. He is credited with a religious revolution, directed from his royal city of Amarna. He wanted to restore the glory Egypt had known under Amenhotep III. He built his rock-cut temple at Gebel Silsila. His tomb at Saqqara was aligned to Heliopolis in the north and contained images of the divinely overshadowed Hathor, the mother of Horus. On the west wall of his tomb is a painting depicting Horus presenting Horemheb to Hathor. The tomb is designated KV57 and it was never completed. 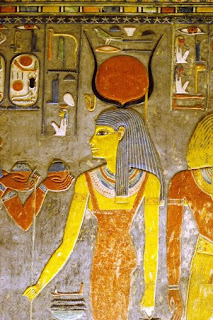 Detail from the tomb of Horemheb


During the reign of Tutankhamen (c. 1361-1352) the cult of Aten was repressed and the capital of Egypt was once again Thebes. King Tut strengthened the authority of Amen's priesthood. His uncle was the High Priest of Ra. During King Tut's reign, Horemheb rebuilt the army which had suffered losses due to pestilence, pacified peoples of Canaan, and fought with the Assyrians against the Hittites in northern Syria. Horemheb killed the Hittite king Suppiluliuma.

Horemheb succeeded Ay who had continued Tutankhamun’s return to traditional religious practices. Horemheb restored the rights of the temple priests, especially at On (Heliopolis). Tutankhamun's cartouche shows the temple of On and bears the word shema which in Hebrew means "hear." The Creator is referred to as the "God of Manifestations." 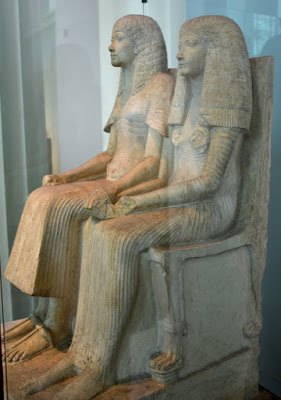 The favor shown to Joseph is described in Genesis 41:44-46.  Pharaoh said to Joseph, "Though I am Pharaoh, yet without your permission no one shall raise his hand or foot in all the land of Egypt."

Joseph was to ride in the king's second chariot; and the servants cried before him, “Bow the knee!"

Horemheb also favored Joseph by giving him as a wife the daughter of the High priest of On (Heliopolis). The shrine city of On was dedicated to Ra, the father, and Horus, the son. Horemheb means "Horus is in festival."

Placing Joseph's rise to power in the reign of Horemheb resolves the difficulty posed by Exodus 1:8: Now a new king arose over Egypt, who did not know Joseph.

It is unlikely that this refers to an individual king. It is more likely that this refers to a new dynasty or a new royal house. The Ancient Egyptian pr-ʿȝ is formed from the words pr meaning house, as in O'piru (Sun house) and ʿȝ meaning great. The word Pharaoh means "Great House." When the text says that Joseph was not recognized, it likely means that the new dynasty had its own officials and the authority of Joseph was diminished.

The Horite Hebrew rulers had two wives. The sons born to these wives spanned many years. Sarah was unable to have children and when she did conceive she and Abraham were quite elderly. Isaac would have been more the age of a grandson to Abraham.

Jacob's second wife was Rachel. She had a difficult time conceiving and Joseph was born when Jacob was quite old. Joseph would have been more the age of a grandson to Jacob.

If we consider Isaac, Jacob, and Joseph as closer to the age of grandsons than sons, the span of their years is close to seven generations, that is, between 600 and 700 years.

An inscription by the Egyptian ruler Merneptah, discovered in 1896 by Flinders Petrie, makes reference to Israel. An earlier reference found with the name “Israel" pushes the Israelite presence in Egypt 200 years earlier, to about BC 1400. That is about 600 years after Abraham the Hebrew had a personal audience with the Egyptian king. The ruler with whom he met was likely Nebhepetre Mentuhotep II who reigned c. BC 2061-2010.

Taking into consideration the age of the sons relative to the old age of their fathers, the calculation of the approximate time of Joseph's rise to power is as follows:

Abraham meets with Nebhepetre Mentuhotep II between c. 2061-2010 BC. Let's put the audience with the Egyptian king at about 2000 BC.

The time from Abraham in Canaan to Joseph's rule in Egypt is between 600 and 700 years.

Related reading: Anthropological Evidence for the Exodus; The Unveiling of Joseph; The Enigma of Joseph

There are theory that there were 2 exodus. The first one happened in 1446 bc. Joseph should be in Egypt before 1446 bc. In 1 kings 6:1, in the 480th year after Israelites came out of Egypt, in the 4th year of solomon's reign over Israel, in the month of ziv, the 2nd month, he began to build the temple of the Lord. Solomon reigned from 970 to 931 bc. That means he built the temple at 966 bc. And that put the first exodus at 1446 since 966+480 gives 1446. This is the first exodus where the house of Joseph were forced to leave Egypt together with the Hyksos.
While the second exodus where Moses lived should happen in the year of 1185 or 1184 bc during the reign of pharaoh setnakht.

Odola, The longer span of time is due to the old age at which the ruler and his second wife had children. The first born son of the second wife would have been to the father more the age of a grandchild. Therefore, the span of the father to son of second wife is equivalent to 3 generations of about 210-240 years.

For more on this see the Analysis of the Marriage and Ascendancy Pattern of the Horite Hebrew Rulers.
http://jandyongenesis.blogspot.com/2008/06/biblical-kinship-symmetrical-pattern.html

Dear Alice, thanks a lot, i've read those Etrus before. But Sarah was Abrahams firt wife and half-sister. How old were Keturahs daughters when Isaak was born? Could it be that they were married already, and not avaliable for him so Isaak had to get Rebecca after his mother died? Was Sarah older then Abraham? When Abraham lost Sarah, was Ketura taking over her role as the first wife? How do the Inadan deal in such a situation? Was Jacob's daughter Dinah married to one of her half-brothers after being recovered after her rape and wedding? King Dawid's raped daughter could have been married to her rapist half-brother without any problem (she herself said so) but he refused and was killed by her full-brother, and then she lived in his household. Could she marry afterwards or as she forced into spinsterhood after that?

All the Horite Hebrew rulers had two wives. The first wife was a half-sister. This was the wife of the man's youth.The second wife was usually a patrilineal cousin, as was Keturah to Abraham. The Bible does not say that Abraham married Keturah after Sarah died. That would be very unusual. The pattern is seen with Moses's father also. See this:

We know nothing about Keturah's daughters, but it is likely that Abraham had daughters as well as sons.

You ask good questions. Keep reading the articles at Just Genesis and Biblical Anthropology. Use the indices to find information and answers.