Was Abraham a Black Man?

"Was Abraham a black man?" People often ask that question once they recognize that Abraham's ancestors came out of Africa. The question reveals some misconceptions that should be addressed.

Molecular genetics has demonstrated that all humans living today have common ancestry and the point of origin of our first ancestors is Africa. From the beginning of human existence, there has been genetic diversity. Even today, Africa has the greatest genetic (and linguistic) diversity of any continent.

Human populations in Africa always have had a great range of physical appearance. Even today Africa has the greatest genetic diversity of anywhere on Earth. For example, in antiquity there were both red and black Nubians. They preserved their distinctive color by marrying within their own type, but the red and black Nubians were one people, a moiety. A moiety refers to each of two social or ritual groups into which a people is divided, especially among Australian Aborigines, some American Indians, and the ancient Nubians.


Even among the red and black Nubians there was a range of skin tone. These red Nubian warriors are an example. Their wavy black hair and feathers resemble the Nabatean warriors of Edom. The Edomites were known to have a reddish skin tone.


Since Abraham was a ruler in Edom, it is likely that he had a red skin tone. That is how one of Abraham's great grandsons is described. Esau is listed in the Edomite ruling line in Genesis 36. Edom was called "Idumea" by the ancient Greeks and the word means "land of red people." 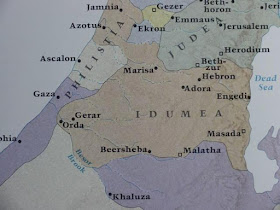 Note that Hebron (where Sarah lived) and Beersheba (where Keturah lived) are in Idumea/Edom. Abraham's territory extended between the settlements of his two wives and was entirely in that region.

This answer to the question "Was Abraham a black man?" is based on the evidence of Biblical anthropology and genetic studies. Were we able to test Abraham's DNA, we probably would find that he was in Haplogroup R1b (Y-DNA). 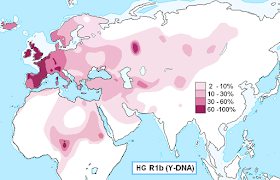 Haplogroup R1b, also known as haplogroup R-M343, is the most frequently occurring Y chromosome haplogroup in Western Europe, some parts of Russia (the Bashkir minority), Central Asia (e.g. Turkmenistan) and in the region of Lake Chad and along the Upper Nile. This is the haplogroup of Abraham's Proto-Saharan ancestors who dispersed widely and are known by many names in ancient history: Kushites, Kushan, Ainu, Saka, Hittites, etc. Among them was a caste of priests known in ancient texts as 'Apiru, Hapiru, Habiru or Hebrew. The skin color of these rulers and priests would have varied greatly. Siblings, even twins, could in fact have been born with quite different skin color.


Related reading: Adam was a Red Man; Seligman's Legacy; The Lines of Ham and Shem Intermarried; Edo, Edom, Idumea; Haplogroups of Interest to Biblical Anthropologists; The Bible and the Question of Race; Twins in Genesis; African Naming Practices