A Christmas Message from Genesis 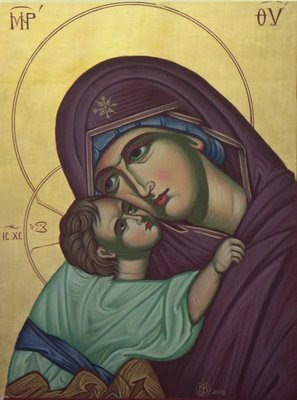 The Lord God said to the serpent, ‘Because you have done this…you will crawl on your belly and you will eat dust all the days of your life. And I will put enmity between you and the woman, and between your offspring and hers; He will crush your head, and you will strike His heel.’ - Genesis 3:14-15


What does it mean to eat dust all the days of one’s life? It means that one’s efforts, one’s greatest achievements are futile. To crawl on one’s belly and to eat dust are images of total defeat! This is God’s verdict on the powers of evil. They may at times seem to be winning, but all their efforts gain them no ground, no advantage.

Wrapped into this verdict is the kernal of the Gospel that the Woman (not Eve in Gen. 3:15) would bring forth a Son who will crush the Evil One and his host of demons. The promise is sure!

The heavens themselves are set against the Devil's rebellion. Our Lord beheld Satan cast from heaven! And the sun, moon and stars bow to the King of Kings, the Lord of Lords. The constellations echo the Angelic refrain:  "Fear not!  For unto you is born this day in the city of David a Saviour, which is Christ the Lord." (Luke 2:11)

Jupiter, called the King Planet, and Regulus, called the King Star, performed a celestial dance to proclaim the arrival of the Son of God.  Christ was not born in Jerusalem, a ancient Jebusite holding.  He was born in Bethlehem of Judea, an ancient settlement belonging to Abraham's Horite people.  I Chronicles 4:4 lists Hur (Hor) as the "father of Bethlehem". The author of I Chronicles knew that Bethlehem was originally a Horite settlement, less than 10 miles from Mt. Hor. So Jesus's descent from David can be traced back to Abraham and the expectation of the Horites that a Son of God would be born from their bloodline.

The ancient prediction in Genesis 49 tells us that He would come from Judah:

You are a lion's cub, O Judah; you return from the prey, my son. Like a lion he crouches and lies down, like a lioness-- who dares to rouse him? 10 The sceptre will not depart from Judah, nor the ruler's staff from between his feet, until he comes to whom it belongs and the obedience of the nations is his.

This clarifies the connection between Jupiter's regal behavior and the tribe of Judah because the starry coronation—the triple conjunction—occurred within the constellation of the Lion, Judah's totem. (Read more here.)

In 2 days, Christians will again celebrate the birth of the Son of God, the only hope of the world. He came to shed His Blood for the life of the world. At His second coming, He will bring that Kingdom of Peace for which our hearts yearn. Until that day, the battle rages between Christ’s seed and the seed of the Evil One.

Many who are in Christ are suffering greatly. Christians are paying a great price to bear witness to the Son of God in places where it can cost one's life. The cruelest human rights violations these days are directed against minority Christians around the world. Let us pray for them even as we celebrate the Nativity Feast, rejoicing that the blood of the saints is precious to the Lord and King who is able to crush evil once and for all, and to restore communion with the Father.

Have a blessed Christmas, dear readers.

Related reading:  Royal Babies; Horite Expectation and the Star of Bethlehem; Christians are Christmas People; The Celestial Dance Observed by the Magi

Alice - that is one of the best Christmas messages I have read this year. Honestly, you rock.

May this Christmastide be blessed for you and your loved ones, Robert and Fr. Rick.

Thanks for reading Just Genesis!

Perhaps that's why C. S. Lewis started with his Narnia series with Jupiter.

Looking at the site you linked to, and noticing no feedback link on it, I need to ask you this:

What evidence do we have of "Jupiter" being known in the Levant in the Early Bronze?

You say that Melchizadek means "My king is Jupiter. Even if you can find a linguistic stretch of some sort, is not the simplest explanation the one actually laid out in Scripture, that melchi=king and zadek, as a form of tzadekka, means righteousness?

This appearance was a clear prefigure of Christ, if not a pre-incarnate appearance, and surely not a devotee to a Roman deity!

Whether the name "Melchizedek" is related to Semitic images of the planet Jupiter, is not something of which I can speak. However, the planet Jupiter is connected to the priesthood, at least in some cultures, such as those in India, where one of the names of the planet/deity Jupiter is "Brihaspati", "the Teacher/Priest of the Gods". The Indians also call him "Guru", "the Great One"; "Vaca", "the Word", and "Surapati", "the Lord of the Gods".

"Jupiter" the Roman deity/planet is simply the Roman form of the deity/planet known to the Greeks ("Zeu pater"), Babylonians ("Marduk"), and other ancient peoples.

That's all quite interesting, and it is now on my reading list, though a few years down the page...

So if you can't speak to whether "Melchizadek," in the languages of the day related to the planet Jupiter, are you saying that the Hebrew QDzT [righteous(ness)] originally meant "Jupiter" the pagan deity? Considering the pagan understanding of righteousness ("Don't tick off a god!"), that still leaves me wondering how you came to your first statement.

We have no record of Jupiter, even as a planet, being mentioned in the (proto) Semitic languages, but the Semitic name which easily and directly translates "King of Righteousness" and is on record as such in the letter to the Hebrews, actually means what we have no evidence of a possibility for it to have meant?

It is interesting as I interact with people from different corners, that it seems there is a good number of C of E clergy far better versed in the occult and early paganism than in the faith of Christ. I hope this is not the trend!

Ah, I see the misunderstanding here. I didn't claim that Melchizedek is connected to Jupiter; that was the claim of the clergyperson who wrote the book (to which I linked) on astrological symbolism in the work of C. S. Lewis.

However, now that the idea of Melchizedek is connnected to Jupiter, I did find this on Melchizedek's connection to Jupiter:

Given that legends surrounding Abraham depict him as adept at the astrological arts, it would seem quite appropriate that Christian clergy would also possess at least some knowledge of that ancient art, whose practice need not be encouraged, but whose importance in the minds of those who did practice them, has to be recognized as part of the human thirst for God.

I agree. This is one of the connections found in the Afro-Asiatic tradition. The Sanscrit “svah” = sky or heaven, corresponds to the Semitic “svam” or “Sam-yim” = heavens. The Semitic resembles the Proto-Dravidian word "van" = heaven. This is probably the significance of the Ja-van tribe (Gen. 10:2). Ja is an ancient name for God.

The Hebrew root "thr" = to be pure, corresponds to the Hausa/Hahm "toro" = clean, and to the Tamil "tiru" = holy. All are related to the proto-Dravidian "tor" = blood. There is certainly a relationship to the injunction that the ancient Egyptian priest be pure (w'b) before entering the temple. All Eyptian priests shaved their heads. Korah, Moses' half-brother, was a priest. His name means "shaved head" and according to Numbers 16:17-18, he carried the censor to offer incense to the deity. "Kor" and "tor" are likely cognates.

The Hebrew "echad" or "ehat" = one, corresponds to the Syrian "eka" and to the Sanscrit "eca" = one. It is a cognate to "ikka" = one, in the Gonga languages of south east Ethiopia.

The linguistic data supports the picture of a rather consistent cosmology and religious worldview from west central African to India 10,000 to 12,000 years ago.