God Has Made Progress with Us!

The book of Genesis ends with the theme of forgiveness and reconciliation in the story of Joseph and his brothers. It is the antithesis to the story of Cain killing his brother at the beginning of Genesis.  Cain was jealous of God's blessings of Abel.  It appeared to him that God favored his brother. Likewise, Joseph's brothers resented that their father favored Joseph.  If we read Genesis as a story of conflict between brothers, we see spiritual progress from resentment and murder to forgiveness and reconciliation.  This is a different picture than that presented in dispensational commentaries which stress the continued spiritual degeneration of humanity. 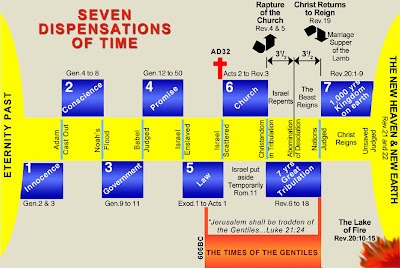 The Scofield Bible, which has greatly influenced conservative American Protestants, defines a dispensation in the subhead to Genesis 1:28: “A dispensation is a period of time during which man is tested in respect to obedience to some specific revelation of the will of God.”  Scofield is not speaking here of the testing of individuals such as Cain, Noah, Abraham, Jacob and Joseph.  He is speaking of the general failure of mankind to love and serve God.  Each of his seven dispensations ends with God's punishing evildoers.  This gives the false impression that God has made no progress with humanity, and misses the obvious contrast between the beginning and the end of Genesis.

On this Sunday of Forgiveness, let us turn all our desires to God who alone is able to purify us and turn our souls from resentment to forgiveness.
Posted by Alice C. Linsley at 1:00 AM

What a wonderful point about a much neglected passage! Joseph is so very Christological and it never occurred to me until recently to see the prefiguring.

I've come back to reading your blog after sometime absent. A good post to put my mind on Lent. Thank you.

Are you familiar with Craig Bartholomew and Michael Goheen's book The Drama of Scripture? When I read it, it opened my eyes to the way that the entire canon of Scripture narrates God's unfolding plan of redemption of His creation.

Thanks, Ross. The book sounds ineresting. I will read it.

The entire canon of Scripture points to Jesus Christ, the Son of God, begotten of the Father before time, incarnate by the Holy Spirit and born of the Woman.

Ms. Linsley,
I know a few Dispensationalists. On a deckplate level, their theology creates a kind of finger-wagging Creator who can't wait to consign his creation to periodic perdition; and that's to not to mention other challenges;soteriology, eschatology, etc. Some evangelicals I know are great rule-keepers, but in my experience lack a Merciful G-d. Thanks for your thoughts. Best and blessings, Brent

The central problem with Dispensationalism is that it divides the one Salvific Action of God thorugh the Pleromic Blood of Jesus into different acts. It is, therefore, diametrically opposite to the message of the entire canon.

I'll insert a chart in the post so that you can see the 7 dispensations.

Oh, the bliss of ignorance. It wasn't until I found the internet that I knew of such things.

Ms. Linsley, yes. Thanks for the amplifying info. Respectfully, Brent