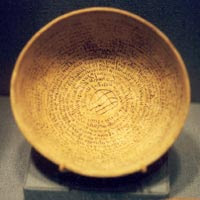 Alice, you have mentioned several times in your posts the seven urns at the wedding in Cana. This has always puzzled me. Having checked several Bible translations, I find only six water pots mentioned.
Where is the seventh pot? Is it the implication that the seventh pot held the OLD wine? Would one pot have held all the old wine they drank? Thank you for your very interesting research; I never miss one of your posts. Hope you find a publisher soon.

Yes, Lydia, there were 6 jars, and the wine that had been consumed came from other containers. So that would make at least 7, but as I continue to ponder this story, I'm sure that the number 6 is significant. Since 7 was the number associated with weddings, 6 suggests that this wedding is a type of the true wedding in which the Son will receive His bride and His kingdom (in that order, if the pattern shown among the rulers of Abraham's people speaks of Christ).

Thanks for your kind words and your interesting comment! I need to think about this.