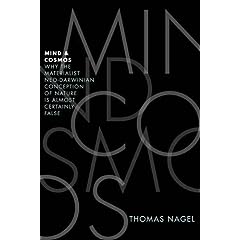 In a 1997 book review, Harvard biology professor Richard Lewontin, speaking for the scientific community, famously remarked, “It is not that the methods and institutions of science somehow compel us to accept a material explanation of the phenomenal world, but, on the contrary, that we are forced by our a priori adherence to material causes to create an apparatus of investigation and a set of concepts that produce material explanations, no matter how counter-intuitive, no matter how mystifying to the uninitiated. Moreover, that materialism is absolute, for we cannot allow a Divine Foot in the door.”

It looks like the door may be opening, at least a crack.

Last fall, Philosophy Professor Thomas Nagel of New York University published a small book entitled Mind and Cosmos: Why the Materialist Neo-Darwinian Conception of Nature is Almost Certainly False (Oxford University Press). The book is important for more than its contents. Nagel is one of the most respected Anglo-American philosophers and also a self-declared atheist (“I lack the sensus divinitatis that enables—indeed compels—so many people to see in the world the expression of divine purpose”). Consequently his criticisms of neo-Darwinian evolutionary theory cannot be written off as one more attempt to defend religion, but rather need to be dealt with on their own terms, as attacks on the adequacy of the theory itself.

Nagel accepts the central Darwinian thesis that present-day species are descendants of earlier, different species. Yet he considers valid many of the negative criticisms of Neo-Darwinian evolutionary theory leveled by Intelligent Design thinkers like Michael Behe and Steven Meyer. Moreover, he acknowledges that many large questions about the origins and development of life remain unsettled, for example the origins of life itself, as well as whether all the chance mutations and natural selection needed to produce present-day species could occur in the available time.

But even more importantly, Nagel calls into question the materialist-reductionist view of nature, which, as Richard Lewontin admits, is accepted a priori by most evolutionists and perhaps by most scientists. In this view of nature, everything that exists is composed of matter and can have only those properties that arise from the basic properties of the underlying material constituents. Biology is reduced to chemistry, and chemistry to physics. Everything that occurs in the universe is to be explained, at least potentially, by the laws, forces, particles and properties that are described by physics.

Nagel points to three things that we encounter in the world which cannot be adequately explained within this materialist-reductionist framework: consciousness, reason or mind, and moral values. We should not try to explain these things away—as often happens—just because they do not square with the reductionist view of nature. Rather, he argues, it is the reductionist view itself that needs to be questioned.

By consciousness Nagel means the fact that beings such as animals and certainly humans have awareness of things, that is, they have subjective experiences like smelling coffee, seeing the blue sky, feeling fear. From the materialist-reductionist point of view, these phenomena are simply occurrences in the brain, a certain pattern of synapses firing that follows from some stimulation, coming, for example, from the eye through the optic nerve. But, as Nagel points out, this electrical activity measured by neuroscientists in the brain is not identical with the person’s subjective experience of smell or color. The “scientific” description of the brain activity always remains on the “outside” and never captures the actual experience of color or smell or fear. In the end, the standard reductionist explanations simply fail to explain the lived experience.

In the case of mind or rationality, Nagel argues that, in addition to the problem of consciousness, it seems difficult to see how reason as a reliable faculty for discovering the truth could simply evolve. Following the lead of contemporary philosopher, Alvin Plantinga, Nagel thinks that natural selection would select for behavior favorable to survival, but such behavior might follow from false beliefs as well as true beliefs. So there is a possibility that the mind has evolved to register as true what in fact is not true. And once a person reflects on this fact, he cannot trust that something is true, even if it seems to him to be such. We may believe many scientific truths—including evolutionary theory—not because they are actually true, but because our minds have evolved in such a way that we think it is true. So the theory of evolution through natural selection seems to undermine the reliability of reason.

Finally, Nagel, like many other thinkers (e.g., C.S. Lewis in The Abolition of Man), points out that the materialist-reductionist view of nature provides no foundation for objective moral values or laws. Nothing in a physics textbook provides moral rules for how human beings should behave. But objective values of some sort, he argues, are necessary for any true, binding morality. Any values created by human beings, whether individually or collectively, can be changed by human beings and ultimately do not present themselves as binding.

Nagel concludes that evolutionary theory, if it is to be truly explanatory of nature, needs to be such that it can explain consciousness, mind and value. This will require a view of nature that is much richer than the contemporary materialist-reductionist view. When it comes to alternatives, however, Nagel is tentative and admittedly vague. In many ways his suggestions for enriching our understanding of nature are reminiscent of Aristotle’s views of nature. For example, he thinks that it will be necessary to introduce a notion of teleology (goal-orientedness) into our conception of nature, so that the emergence of the human mind is more than a simple chance event.

Nagel explicitly recognizes that a theistic origin for the natural world would solve all the problems he sees in the reductionist view. God can create a kind of matter out of which conscious beings can be formed. God can create minds capable of grasping the truth with certainty. And God can create a moral law. But Nagel chooses not to go down that path. His reasons are not really intellectual, but simply reflect his personal preference for atheism. Even so, his little book will have an impact on the ongoing debates about evolutionary theory and the basic constituents of the natural world. Whether he admits it or not, the divine foot is pushing open the door.

I don't know if you've ever read the post Perry Robinson made on his blog (http://energeticprocession.wordpress.com/2011/05/17/the-other-side/), but it is a devastating critique of any hope for moral objectivity or epistemology for anyone who holds to this reductionist world view. Definitely worth the read, and seems to be apposite to the book.

The person with whom Perry is conversing holds a very strange view of metaphysics, naturalism, empiricism and epistemology.

He states, “If we ground ethics outside nature we are doing metaphysics. I do not know, a priori, what properties a metaphysical reality would possess if it existed. Given a metaphysical Wild card, ethics may be hypothetically possible. But, as a naturalist this is not an option. The naturalist must restrain himself to properties he can sense lest he cease to be a naturalist."

Ethics has always been grounded in what is universally observable and in the uniformity of nature. It is the recognition of and honoring of established boundaries in nature. In evolutionary biology this is called "horotely" a referent to Horus who was said to be the fixer of all boundaries: seas, wind, earth, sky, human populations, kinds/essences, east-west, etc. Even strict empiricist recognize that there are boundaries. Consider these statements:

"The proposition that the course of Nature is uniform, is the fundamental principle, or general axiom, of Induction."--John Stuart Mill

"To be is to be the value of a bound variable."--Willard van Orman Quine

There are boundaries everywhere. They are sensed, observed and generally honored. It is a sign of perversion, spiritual rebellion and foolishness to reject and attempt to overthrow those boundaries.