Archaeological evidence indicates that Horite temples, such as those found at Petra, and near the Amman airport, and at Shechem, were square with a "holy of holies" at the heart of the larger square. This holy space at the Amman airport temple was 6.50 meters wide (almost exactly 7 yards) and surrounded by a narrow corridor that was broken into six rooms of equal size. At the very center of the most sacred space was a round stone platform that either served as the pedestal of a stone pillar or as the base of an altar.

Horite temples and shrines were located at water sources such as wells or along major rivers like the Nile. Cisterns have been found in many of the ancient temples. Solomon's temple had a cistern that held over 66,000 gallons of water (250 cubic meters).

In the ancient world, a temple was considered the mansion (hâît) or the house (pirû) of the deity. The shrines and temples were aligned to the rising sun and were called O-piru.  The O is a symbol of the Sun. The priests who served at these sites were Hapiru or Habiru (Hebrew).

Biblical On (Ainu) or Heliopolis (City of the Sun) was an ancient shrine settlement on the east side of the Nile. The pyramids of Giza, Saqqara and Abusir are aligned to the obelisk at Heliopolis. 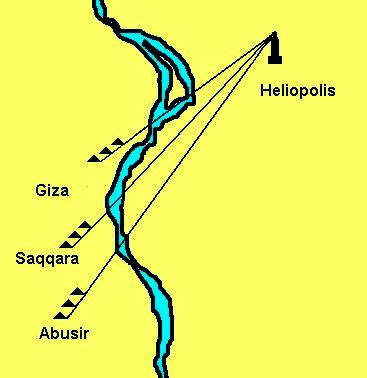 Recently a six-sided obelisk was found at a 10,000 year shrine settlement in the Judean Sephalah. The obelisk is oriented to the rising sun. This means that the architects of the shrine tracked the solar arc. The majority of ancient and prehistoric sacred sites align to meridian cardinal directions and the solar arc.

In addition to an obelisk, axes, and a well designed administrative area, the archaeological team discovered the oldest known plaster floor in the region. It was near this floor that a cluster of flint and limestone axes was found. These are smaller than the mace heads found at Nekhen, a Horite shrine settlement in Sudan. Votive offerings at the Nekhen shrine were ten times larger than the normal mace heads and bowls found elsewhere, suggesting that the Nekhen settlement was very prestigious.

Read more about the discovery of an obelisk in Judah.