A Theological and Scientific Conversation about Humans 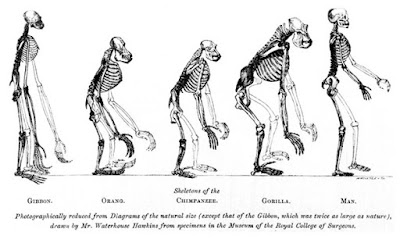 A reader has asked: "What about the idea that the evolution of the human physical body from other primates is a possibility, as long as the soul is believed to have been directly created by God?"

Response from a Roman Catholic friend:

That is not an historic Christian view. St. Paul and Thomas Aquinas make it clear that the human is not human without the body.

Both body and soul are essential to the individual human's being. God creates the soul ex nihilo, and the parents generate from gametes the body that the soul informs and vivifies, thus enjoying the privilege of co-creating with God.

Well, there is no reason to suppose that the two teachings are mutually inconsistent. By generating the body of their child, and thus acting as efficient causes of their child, parents only produce the material cause, not the formal cause, of the entire person who is their child. The soul does not come into being without the body and the body does not come into being without the soul. Yet the body is that of a human person, from the moment of conception, only in virtue of God's infusing it with a spiritual soul.

The soul need not, therefore, be itself produced by the parents in order to be the form of the body. And so the dogma that the soul is the form of the body offers no support for traducianism, which some but not all Church Fathers held. Aquinas even argued: The process of spiritual generation is impossible; since the soul is immaterial and indivisible, no spiritual germ can be detached from the parental soul (cf. St. Thomas, Summa Contra Gentiles II, 86; Summa Theologiae I:90:2, I:98:2, etc.).

Response from JandyonGenesis:  Archaic humans were fully human. The essence of the human is Trinitarian: body, mind and soul (anima). There is no substantial evidence that archaic humans lacked this essence. In fact, to argue such is to assert that such creatures are not human.

We must begin by identifying the 4 keys ideas of evolution and examining the evidence for each:

Touching on the first point there is no doubt that mutation is a reality. Living organisms under go mutation both gradually over long periods of time and sometimes rather quickly. However, there appears to be a boundary to mutations in a given class of organisms. This is referred to as horotely, a Greek word that is a reference to horos - limit or boundary, and to the word horizon. The term is likely related to Horus, the "son" of the Creator who was said to be the fixer of boundaries.

Adaptation is also a reality. God created organisms with the ability to adapt to their changing environments. It appears that organisms gradually "accumulate" certain physiological, behavioral, and structural traits that aid their ability to survive and reproduce under existing environmental conditions. Those that are unable to adapt become extinct.

Natural selection takes place.  The theory of evolution by natural selection does not attempt to explain how life first began or why living things are on Earth. Rather, the theory of natural selection explains the observable processes that change the physical characteristics of living things through time. That said, we are still speaking of the theoretical rather than a law of nature, since some poorly adapted organisms nevertheless thrive in their environments. If we are honest, we must admit that there are factors in survival that we do not understand, and which may pertain to supernatural oversight, something beyond the realm of science.

Common ancestry or common descent of all living organisms is a hypothesis proposed by Charles Darwin in On the Origin of Species.  He believed that it is likely that all currently living organisms on Earth share a common genetic heritage with each being the descendant from a single original species. He wrote, "There is a grandeur in this view of life, with its several powers, having been originally breathed into a few forms or into one."

The common descent hypothesis is suggested by developments in the Cambrian explosion and later, but anthropologically speaking, there is no physical evidence to permit us to state as fact that humans and apes have a common ancestor. Molecular genetics has not proven this, but it has provided a model for how this might be so. We must accept that common ancestry is quite contrary to what Genesis asserts about humans as a special creation. As Christians who take Scripture as a first/primary authority, we cannot gloss over this or assume that this view represents ignorance on the part of the ancient Biblical writers.

The Rising Star Expedition in Southern Africa has retrieved and cataloged over 1000 hominid fossils, and large numbers of fossils remain at the underground site to be retrieved in future expeditions. The findings of this expedition are forcing paleontologists to rethink the evolutionary model. First, these archaic humans practiced ritual burial. Second, these fossil remains reveal a wide range of physical features. The features that have been identified are found in modern humans. One feature that has been shown in various images is of a skull with a protruding chin (projecting jaw). This same feature is found in R1b lineages from Africa to Serbia to Ireland, and most commonly among the metal working castes (who intermarried) and who dispersed widely in service of ancient rulers.

My concern is that we not allow labels to skew our interpretation of the data. When we look at the labels attached to various remains we find see that these are not very helpful. Neanderthals were fully human. The features associated with them have been found very widely, well beyond the Neander Valley of Germany.

Mary Leakey’s 1979 discoveries in Tanzania added to the evidence that humans walked the earth about over 3 million years ago. At Laetoli, about 25 miles south of Olduvai Gorge in Tanzania, Leakey discovered footprints of a man, woman and child created about 3.6 million years ago and preserved under falling ash from the nearby Sadiman volcano. The raised arch and rounded heel of the footprints showed that whoever left these footprints walked as humans today. Unfortunately, Donald C. Johanson had already announced to the world that the finds were apes, though Mary Leakey would have classified her Laetoli finds as Homo/human. She expressed her regret that “the Laetoli fellow is now doomed to be called Australopithecus afarensis.”

Johanson and Mary Leakey were scheduled to speak at a Nobel Symposium in Sweden in May 1978. The conference honored Mary Leakey, who received a medal from the King of Sweden for her scientific investigations. Mary Leakey received the Golden Linnaean Medal, but also was very embarrassed when Johanson announced the new name - Australopithecus afarensis - for his Afar Triangle finds and included Mary Leakey's 4 million year old Laetoli specimen (jaw bone LH4) from Tanzania as an exhibit. Johanson, who was scheduled to speak before Mary Leakey, scooped Mary's speech. She was angry that Johanson had named her discoveries, using a designation that was totally at odds with what she believed to be the evidence. Johanson's name stuck though today, based on more recent discoveries, he doubts the accuracy of the ape designation.

Based on years of teaching students, I have found that labels such as Neanderthal and Australopithecus tend to cause confusion. Among these groups the range of physical traits is the same as the range of traits found in modern human populations. So much so, that it is more helpful and more accurate to speak simply of archaic humans and modern humans. This is one reason I believe that the earliest humans appeared on Earth about 4 million years ago, and although they show archaic anatomical features, they were created fully human with the potential to develop (evolve) into modern humans.

This is not an argument for or against evolution but it is an issue I cannot get my mind around - Evolution is said to occur over millennia or maybe centuries or even decades. But survival or extinction is decided in an eye blink.

Extinction can also be a gradual process, such as when a community of humans waste away and die due to nutritional deficiencies.

Death did not exist until sin was introduced after Adam/Eve's disobedience. How do you propose to have millions of years of evolutionary death before Adam?