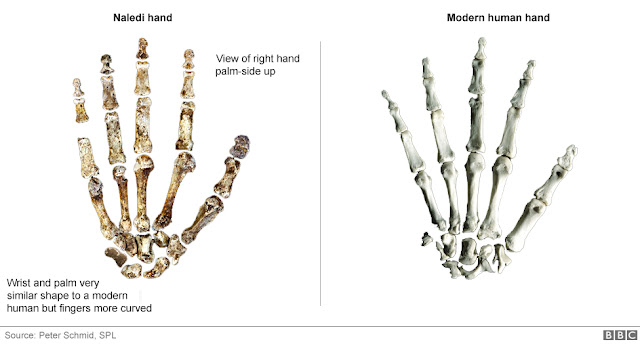 The 250,000 year hand of Homo Naledi is virtually identical to that of modern humans.

The critical period for understanding how evolutionary fictions are spun is here:

Let's check the facts concerning Ardi and Lucy. Are they two different species of hominid? Are they ape or human?

Australopithecus afarensis (Lucy) and Australopithecus ramidus (Ardi) existed at the same time, c. 4 million years ago, and both had human hands, human feet, and walked upright. The assignment of 5.5 million years for Ardipithecus is unfounded. It represents an attempt to create a progression that fits the evolutionary theory. White's team assigned an age of approximately 4.4 million years.

The description of Ardi as a "proto-human" is also unsupported by the evidence. Ardi's anatomical structure is well within the range of human anatomy.

The claim that Lucy (AL 288-1) and the Australopithecines could not have been fully human because of their small brain size is pure foolishness. Brain size is not a measurement of the complexity of thought. The cranial size of both Ardi and Lucy is consistent with their body size.

"Australopithecus ramidus" was the name given to Ardi by the American paleoanthropologist Tim White who discovered the first Ardipithecus ramidus fossils in the Middle Awash area of Ethiopia between 1992 and 1994. Since that time, White's team have uncovered over 100 fossil specimens that it identifies as Ar. ramidus. Little has been said in public about the subsequent 100+ finds, which makes one wonder if they are significantly different from Ardi, and perhaps very like Lucy?

The name given to Ardi was to distinguish White's find from Lucy and thereby create an evolutionary bridge between apes and humans. Ardi is posed as the missing link, but the data is not there to support this theory.

Ardi was found only 46 miles from where paleoanthropologist Donald C. Johanson discovered Lucy in 1974 near Hadar village in the Awash Valley of the Afar Triangle in Ethiopia. Lucy and Ardi date to the same time, c. 4 million years. Ardi's anatomical structure has some anomalies, but these are still within the range of human anatomy. She had a rigid big toe that somewhat splayed outward. The large bones of her upper pelvis are consistent with human bipedalism. Some of the anomalies are explained by the fact that her remains were apparently trampled into mud by hippos. Her "badly crushed and distorted bones" were exposed millions of year later by erosion.

Tim White has spun a fiction using the same technique that Donald Johanson used in 1978, when he attempted to create the missing link by naming Lucy "Australopithecus afarensis." Australopithecus means "ape of the south."

Mary Leakey’s 1979 discoveries in Tanzania added to the evidence that humans walked the earth over 3 million years ago. At Laetoli, about 25 miles south of Olduvai Gorge in Tanzania, Leakey discovered footprints of a man, woman and child created about 3.6 million years ago and preserved under falling ash from the nearby Sadiman volcano. The raised arch and rounded heel of the footprints showed that whoever left these footprints walked as humans today.

Unfortunately, Johanson had already presented Lucy as more ape than human though Mary Leakey would have classified her Laetoli finds as Homo/human. She expressed her regret that “the Laetoli fellow is now doomed to be called Australopithecus afarensis.”

Johanson, who was scheduled to speak before Mary Leakey, scooped Mary's speech. Leakey was perturbed that Johanson had named her discoveries, using a designation at odds with what she believed to be the evidence. Johanson's designation of ape for Lucy has held, though today Johanson has doubts based on the more recent discovery of a complete fourth metatarsal of A. afarensis at Hadar. This shows the deep, flat base and tarsal facets that "imply that its midfoot had no ape-like midtarsal break. These features show that the A. afarensis foot was functionally like that of modern humans." (Carol Ward, William H. Kimbel, Donald C. Johanson, Feb. 2011) Read the report here: http://science.sciencemag.org/content/331/6018/750

One of two fossilized bones from Dikika, Ethiopia, that show evidence of stone tool use.
Credit: Dikika Research Project

A. Afarensis had human dentition, used polished bone tools, and controlled fire. Some of the earliest evidence of controlled use of fire by humans was found at Swartkrans in South Africa. Other sites that indicate fire use include Chesowanja near Lake Baringo, Koobi Fora and Olorgesailie in Kenya. Discoveries in Dikika, near Gona and Bouri (Ethiopia) indicate that they used flints to scrap, saw and chop. Two fossilized bones have been found that show the marks of stone tools. On the basis of low-power microscopic and environmental scanning electron microscope observations, these bones show unambiguous stone-tool cut marks for flesh removal and to access bone marrow.

As the world renown paleoanthropologist John Hawks has noted, arguing about species has more to do with ego than with evidence. He writes,

"Just today, I got notification of a new paper by Walter Neves and colleagues, in which they suggest that Australopithecus sediba and Homo naledi are actually South African representatives of Homo habilis. Some people might scoff at this—after all, the Dinaledi fossils are only 236,000–335,000 years old, while the latest-known H. habilis is around 1.6 million. But a young date for some fossils doesn’t bar them from membership in a species with much older fossil representatives. Identity is tested with morphological evidence, not geological age."

Thanks for this skeptical analysis about the exceedingly long evolutionary timelines that comprise the orthodox version of human ancestry. Like you, I am continually troubled by the leading scientists’ explanations for why the recent discoveries support exceedingly long timelines. There is a hallowed tenet of the old-school paleoanthropology, represented by the likes of Richard and Mary Leaky, Donald Johanson, etc., where priority reliance is placed on physical characteristics of the fossils, and the need to date widely varying divergences in different discoveries to widely different time periods, while allowing, among contemporaneous individuals, for some range of minor variability of the bone structures and their presumed functions. John Hawks statement: “Identity is tested with morphological evidence, not geological age”, suggest that he owes his allegiance primarily to this view. Then, today, there is another competing school that relies on DNA and the idea of the “fixed” biological clock and the “constant” rate of mutation. There are now vast, -- and it seems to me unresolved – differences in the various estimates of the time of the emergence of the human species, based on whether you follow strictly the evidence of old-school morphology (a-la Richard and Mary Leakey, Donald Johanson, etc.), or the new-school biological clock premise. The “biological clock” thesis, if you follow it, is -- amazingly, -- compatible a much shorter evolutionary timeline and demands acceptance of the possibility of rather rapid (or perhaps, at times, accelerated) evolutionary change. The most recent common ancestors of all human beings living today could be, according to the biological clock evidence, no older than some 50,000-200,000 years ago. (“Ancestral Adam” being more recent, “Ancestral Eve” being more distant, but neither one anywhere near as distant as the explained conjuctures for a 3-4 million year-old Ardi and Lucy!) The biological clock thesis lends support to young earth Creationists’ views that, notwithstanding all the morphological variability in human beings’ physical characteristics (skin color, hair type, physical measurements, etc.) all the individuals living today must have an origin nowhere near as distant as Ardi and Lucy are supposed to be. Do you have any conjectures for how the two streams of thought should be reconciled? In 2010 I had a chance to meet the great Yves Coppens in Ethiopia at a talk he was giving about Lucy and other fossil finds, and I asked him this question. He replied that, while he remained loyal to the morphological school, he was aware of the discrepancies in evolutionary timeline estimates that were being produced by new types of research; yet notwithstanding, he had no doubt that the all the differences would be reconciled someday. Talk about blind faith!

Did you read about the 10 million year old humanoid tooth in Germany?

The teeth belong to a "species" known to have lived in Africa. On the basis on a single find, we can hardly rewrite all we know about modern humans and their point of ancestry in Africa.

The 9.5 million year dating of these teeth is less significant than their identification as not human.