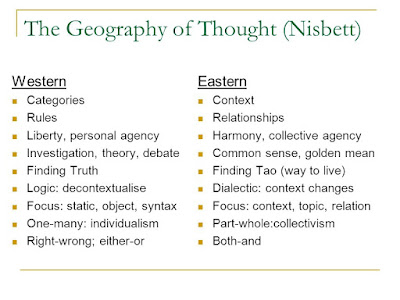 What follows is an excerpt from an excellent article written by Jeff A. Benner, Director of the Ancient Hebrew Research Center.  Here he touches on some of reasons western readers have a difficult time understanding the creation accounts in Genesis.

The Hebrew stressed the concreteness of God's work. They do not spiritualized the material as the Greeks tend to do. Benner cites Exodus 7:12 as an example of concrete thinking.

But Moses' hands grew weary, so they took a stone and put it under him, and he sat on it, while Aaron and Hur held up his hands, one on one side, and the other on the other side. So his hands were steady until the going down of the sun. (ESV, Exodus 17:12)

Benner writes, "In this passage we can see many concrete words including hands, stone, sat, side, steady and sun. In addition, the entire sentence creates a visual scene that we can easily picture in our mind.'

The Greek thinker uses a linear logic that flows in steps from a beginning to an end. Each step is linked closely to the next in a coherent and rational fashion. In contrast to this, the Hebrew thinker uses block logic, which groups things together according to their similarities. Because of these differences, Western readers of the Bible, who are reading the Bible from a linear perspective, read the creation account in Genesis as if it was written in chronological order, but this was not how the narrative was written; the different events of the creation account are recorded in blocks of related events.

The next three days of creation are related to the filling of the creation.
Day 4 – Filling the light with the sun and the dark with the moon
Day 5 – Filling the water fish and the sky with birds
Day 6 – Filling the land with animals and man

The record of events for the first six days of creation, are written in blocks of parallels, a form of Hebrew poetry, and can be written like this;

2 – Separating the water from the sky

3 – Separating the land from the water

6 – Filling up the land with animals

Days 1 and 4 are paralleled with each other and are recording the same event as we can see from the following verses.

And God saw that the light was good. And God separated the light from the darkness. (ESV, Genesis 1:4)

The Bible was written by Hebrews in a culture that was predominately Eastern in its philosophy, while we, the readers of the Bible, live in a culture that is predominately Western in its philosophy. Eastern philosophy is the form of philosophy of all ancient cultures (as well as all primitive cultures that still exist today). Western philosophy was developed in the Greek culture by its ancient philosophers about 3,000 years ago. When we read the Bible, which was written from an ancient Eastern Hebrew perspective, we will frequently misinterpret the text because we are reading it from a Western Greek perspective.

When it comes to reading the Bible in its proper perspective, the five major differences between Hebrew and Greek thought must be kept in mind; concrete vs. abstract thinking, passive vs. active descriptions, impersonal vs. personal relationships and linear vs. block logic.
It is hard for our Western minds to grasp these very different perspectives of thought, but if we do not accept the fact that the Bible was written from a perspective that is very different from our own, we will continue to misinterpret it.


Related reading: The Binary Worldview of the Bible

That makes sense. It explains things, because a linear reading/interpretation of the creation doesn't make sense. Verse 14 clearly goes with verse 3. Reading it in a linear fashion, verse 11 before 14, it is problematic - though I'm guessing the counter would be that "light" was already created.

This also is a reason to avoid the assumption that Abraham married Keturah AFTER Sarah died. This based on the fact that the marriage of Abraham and Keturah and the list of their sons comes after the account of Sarah's death. Abraham had two wives: Sarah and Keturah. They lived in separate households on a north-south axis. Sarah resided in Hebron and Keturah in Beersheba. This followed the pattern of the Hebrew ruler-priests. The wives marked the northern and southern boundaries of Abraham's territory.

Biblical scholars who approach the Bible from literary analysis have noted this block logic. They sometimes speak of story cycles, or strands of pearls. One frequently overlooked cycle is found in Genesis 36. This pertains to the Horite Hebrew of Edom. Edom was Abraham's territory. It extended between Hebron in the north to Beersheba in the south, and from Engedi in the east to Gerar in the west.