Genesis chapter 7 speaks of water levels so high that they covered all the mountains under the heavens (7:19). If this is hyperbole it doesn’t matter where Noah was living. However, if this is an account from Noah’s perspective, it would be helpful to know where Noah lived. There is only one place on earth that is claimed by the natives to be Noah’s homeland and that is Bor’Nu (Land of Noah) in the region of Lake Chad.

A black mahogany dugout was excavated in Bornu in 1987. The 8000-year Dufuna dugout (shown below) was buried at a depth of 16 feet under clays and sands whose alternating sequence showed evidence of deposition in standing and flowing water. 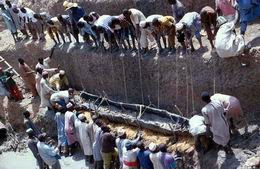 The Lake Chad Basin is the largest inland drainage system in Central Africa, and it is surrounded by mountains. Between 41,000 and 2,300 years ago it experienced four high water periods. The period has been called the African Humid Period, and the African Aqualithic. The latter term was coined by the British archaeologist John Sutton (Journal of Africa History 1974; Antiquity 1977). Noah would have lived during the last high water period. Around 4000 BC, when Noah would have lived, Lake Chad is estimated to have covered an area of 248,548 miles (400,000 km).


During the African Aqualithic much of the Sahara was wet and the waters systems along the African rift interconnected. It was possible to travel by small boats between the Nile and Lake Chad. This explains the common plant and animal species found in both water systems.

The gray areas on this map show the ancient water ways. The solid black line shows the rift line. Lake Chad is where the countries of Niger, Chad, Nigeria and Cameroon meet. 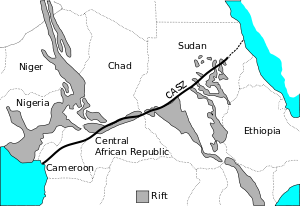 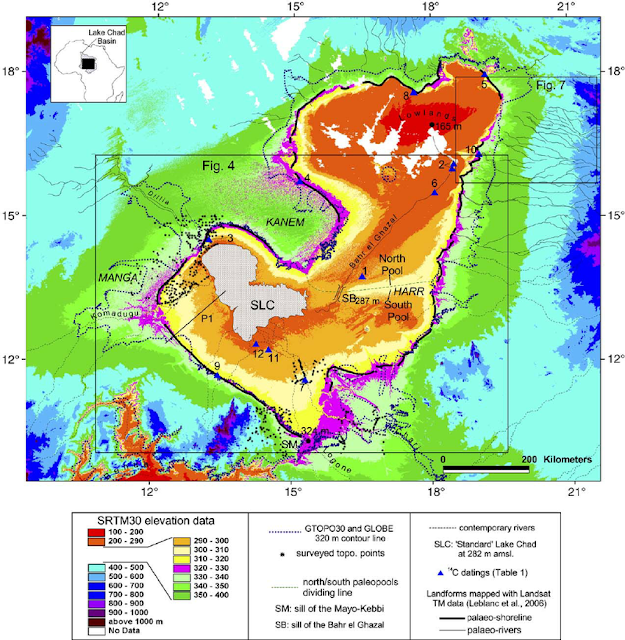 Related reading: The Historicity of Noah's Flood; The Rise and Fall of Africa's Great Lake (NASA)