Texts from the earliest civilizations indicate that the ancients were acute observers of the natural world. They observed flood cycles, dry seasons, and volcanic activity. Such natural phenomena are described in the Bible and in other more ancient texts.
In Genesis 1 the chaotic primal waters are subdued by the generative Word that goes forth from the Creator. Genesis 1 uses the words tohu (formless or confused) and bohu (empty or void) to describe the beginning. The Hebrew phrase "formless and void" (Gen. 1: 2) is tohu wa-bohu and appears to be of Nilotic origin. In Isaiah 34:11 tohu means "confused" so Genesis 1 refers to matter in a confused or chaotic state before God set things in order.
The ancient Egyptians believed that chaos (tehom) dwelt south of Yebu (Elephantine Island) as a great river serpent called Apep or Apophis. This serpent is depicted as the enemy of the High God Ra. In this image Apep attacks Ra as he journeys from east to west in his solar boat.

The serpent Tehom was overthrown by Tehut, divine Wisdom, shown in this image as Horus, the son of Ra. The image below is of a relief from the temple of Horus at Idfū in Egypt. It shows Apophis being subdued by spears. 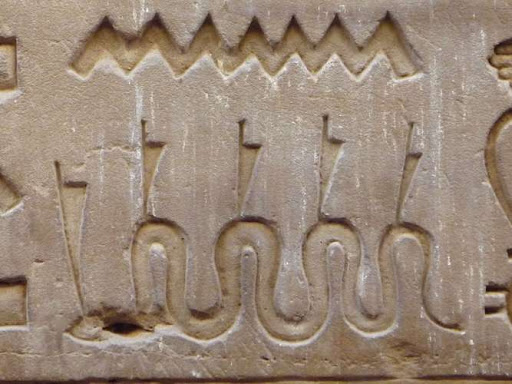 The dark turbulent waters called Tehom in Genesis 1 relate to the Nilotic word for water, Tehem. Tehom is the antagonist of Tehut in ancient Nilotic mythology.
In the ancient world natural and spiritual forces are often portrayed as demons and deities. In the Bablyonian context, Tiamat is a goddess, but in the Nilotic context, Tiamat is the chaotic waters that are subdued by God.
The name of the coastal region of Yemen is Tihamat. The word is related to the Akkadian words for sea, tâmtu and ti'amtum, and tiamatu - ocean, abyss, and to the Egyptian word tehem which refers to water.
The Law of Tehut was established about 5600 years ago by King Menés who administered justice and issued edicts to enhance food production and distribution, guard the rights of ruling families, improve education, and increase knowledge of the natural world through geometry and astronomy. The Law of Tehut was to establish order in his territory.
Related reading: Te-hut overcomes Te-hom; The Nilotic Substrata of Genesis 1; The Mountains and Horizons of Ancient Egypt; The Themes of Genesis 1-3
Posted by Alice C. Linsley at 3:17 PM