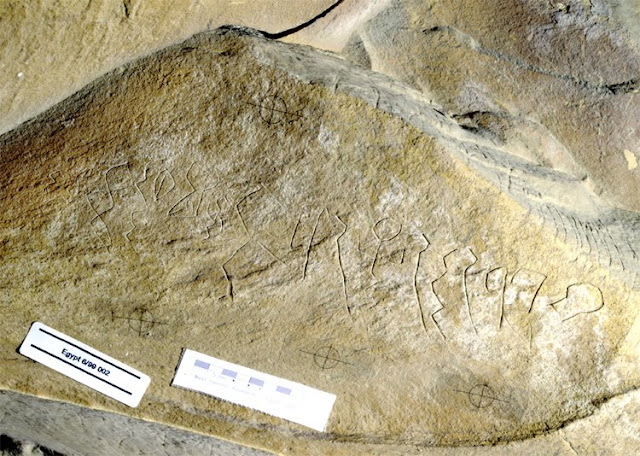 Professor Frederick Dobbs-Allsopp, (Princeton Theological Seminary) is the official epigrapher of the archaeological expedition to Wadi El-Hol. He is responsibile for deciphering and publishing the Canaanite inscriptions found at Wadi El-Hol in Egypt.
The inscriptions found on several stones indicate that alphabetic writing was used in Egypt as early as 4000 years ago.
John Coleman Darnell (Yale University) and his wife discovered the inscriptions. Professor Darnell stated, “These are the earliest alphabetic inscriptions, considerably earlier than anyone had thought likely."
Related reading: Early Alphabetic Writing Found at Lachish
Posted by Alice C. Linsley at 4:12 AM

My apologies, I did not realize someone posted a followup. My suggestion would be that it is very difficult to determine.

V - These are for Athtar (the goddess), the bow and the scimitar. El...
H - is the Powerful Lord who intoxicates her soul that it is depleted [of violence].

If the inscriptions are a single text, then in the Horizontal inscription there is a single instance of Egyptian borrowing - the word nwh. meaning to intoxicate or be drunk in Egyptian. However, kpt_ (scimitar) is very difficult to place as it derives from the idea of a lamb - and its leg. The word pops up as Kopesh in Greek and Khopesh in Egyptian. However, I would argue its only known Semitic usage (other than here) is Ugaritic.

Other than this, there are only two other obvious markers. The first is the H after cT_TR. This marks a dative or locative case found in Ugaritic and Canaanite. However, the orthography more closely matches Ugaritic - I believe Hebrew more commonly suffixes an aleph. The other is the initial demonstrative - which appears to be Arabian.

Other than this, the other words and the basic grammar could be considered 'common' Semitic or essentially un-localizable. My suggestion is that the closest related language is Ugaritic, and that the inscriptions are NW Semitic with evidence of the influence of Arabian grammar.

And no, they were - in my opinion and in agreement with Darnell et al. (2005) - carved between 1830 and 1800 BC. The Sinai corpuses occur between roughly 1700 (or maybe earlier) and 1350 BC; with the bulk actually being Hyksos texts - bearing the names of two known Hyksos pharaohs.

There's a lot of obfuscation in this 'field's' century of study. One of these points is that everything is Canaanite. In fact, while there is some evidence in Sinai of a Proto-Canaanite phonology, there is actually very little evidence of linguistic Canaanite. These languages range from similarity with Ugaritic, Aramaic (and some Arabian). However, there is more obvious influence of Syrian and Mesopotamian imagery - in addition to obvious borrowing from Egyptian. I would argue that the Wadi el-Hol authors were either Syrian or Mesopotamian - but with Arabian influences for both linguistic and paleographic reasons.

Thanks so much, Michael.

NW Semitic makes sense. I see some relation to the Thamudic. I'm also interested in the relationship to Menes
http://biblicalanthropology.blogspot.com/2012/01/menes-fact-and-fiction.html

Any thoughts on connections here?

Well. Shortly, no. Thamudic is a wide classification of North Arabian scripts (and presumably dialects) that have very murky dispersion in terms of dating and style. I used some North Arabian scripts in my analysis, but in general (while similarities are absolutely not coincidental in some cases) the Sinaitic corpuses are probably 'North Arabian' geographically, but probably not as much paleographically - there is a lot of time between them.

Menes lived a very long time ago, and presumably would have lived over 1500 years before the first alphabetic inscriptions; so no there is no connection here.

To the Amorites, it is possible. Part of the problem is that a huge amount of what we know linguistically, in the 3rd and 2nd millenniums, is based on effectively 'defective' phonetic writing systems. Cuneiform derived through Sumerian, and so it does not necessarily properly reflect Akkadian phonetic realization - likewise with Egyptian transcriptions (and later Greek - which sometimes used gamma in place of Hebrew ayn - suggesting Hebrew late retained ghayn phonetically but not orthographically). So... it is possible, but it is difficult to necessarily show the relationship between a less defective alphabetic writing system and - in the Amorites' case - fragmentary data.

As for the racial element here, since I read parts of your blog, I must totally disagree. All these people were linguistic Semites, but this means absolutely nothing with regard to race - since race is a socially constructed dimension. It also does not necessarily connect these people solely with Mosaic Jews (if you will).

Finally, I must tell you that my own research leads me to believe that the "Post-Noahitic" racial divide was actually an allegorical reference to societal classes. Ham, a cognate with Egyptian km - the origin of the name of Ancient Egypt km.t - and cognate with d.lm (> Dilmun) suggest that these three important polities named themselves 'black' or perhaps the 'fertile soil' settled peoples. Ironically, the Sumerian word for 'white' is barbar > babbar (in Akkadian transcription of a plant name containing the compound it is retained as parparhu).

Likewise, Sam may retain some connotation of Ar. shm "arrow" or 'straight' and analogous with the Sumerian dumuzid "the righteous son" and nomad. In the Sumerian equivalent of Cain and Abel (called Inanna Prefers the Farmer) almost the opposite of the Biblical story occurs. The nomad extorts from the farmer, and although the story is cut off, for some reason Inanna prefers the farmer. It is propaganda adapting the idea of the nomad (Ibil < 'water bringer' / 'camel') unjustly wronged by his settled brother (qyn < 'blacksmith'). But with Sumerian spin, the farmer (the settled Sumerians) are in the right.

Yapheth derives from npt_ meaning to "blow" and refers to sailing societies - I would equate him possibly with Utenapishtim from Dilmun - who I think literally means 'the sailor' the eponymous first sailor - U (ride(r)) te (boat-part) napishtim (of the wind). Although in fairness I will have to actually find the cuneiform orthography of his name to test this.

In any event, I personally see translation of this evidence - which I will say does have some relevance to the Exodus that I will eventually publish - will not make the story less complex, but will add a slew of complexity as it becomes clear that ideational globalization has been a fact since humans left Africa. It is illogical to think that humans spread without any knowledge or recognition of the past - however distorted.

(I am wrong, the name is supposedly Utnapishtim - with Ut apparently meaning '(he) found' (maybe like Akk atu^) and napishtim meaning "life" - so I would still argue that it then means 'He Found Wind' - and the three 'peoples' could conceivably roughly equate with Dilmun/Sumer; Magan (maybe?) if 'Maganites' were nomadic; and Meluhhans whose city name Meluhha comes from the Semitic malaa7a (sailors).

It gets odder, I am also working on publishing an apparent South Arabian text in two Ugaritic fragments that describes Arabian place names in the context of the past fallen towns of a 'Maiden' and a contemporary siege of the cities of Baal. I was keyword searching for Dilmun (z.lmt in Ugaritic) - but it also mentions Umam-Yam (Oman), Ubar-Manaat (Ubar), and Habilah (Havilah).)

You may be right about the "Post-Noahitic" racial divide was actually an allegorical reference to societal classes, assuming there were classes. The evidence leads me to image castes instead, and these are characterized by endogamy and the inheritance of specific labor tasks from father to son. In a caste there could be many physical attributes that we today would call racial. After all, there were red and black Nubians and they appear to have been a moiety.

I question your interpretation of Ham as a cognate with Egyptian km - the origin of the name of Ancient Egypt km.t - and cognate with d.lm (> Dilmun). There are too many other possibilities to explore. That said, looking back to the Nile for a better understanding of non-Hebrew words is an excellent starting point.