Mary, the most honored woman of the Bible and in the Church, is called "Theotokos" because she brought forth Jesus, who is Christ our God. He is the promised Son of God, the long-awaited Messiah. His mission, as God in the flesh, was and is to save sinners, to make void the curse of death, to destroy the powers of darkness, to make dead men live, and to restore Paradise. 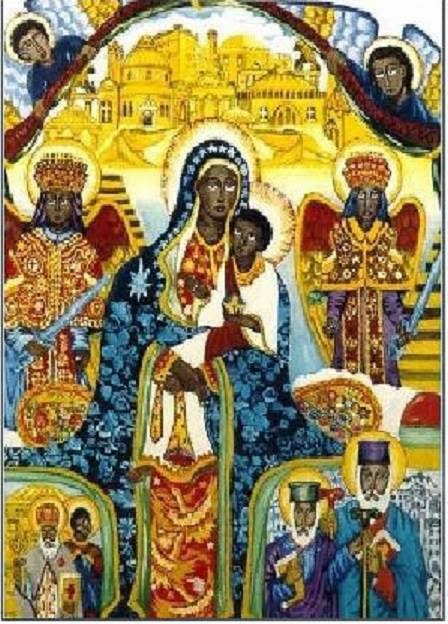 Through Mary the promise of Genesis 3:15 is fulfilled. The Seed of the Woman crushed the serpent's head and death has been overcome. The ancient expectation of a divine royal son who would overcome death is found only among the Horite Hebrew priests, the Virgin Mary's ancestors. Nekhen on the Nile is the oldest known Horite Hebrew (Habiru) temple (3800 BC). Here we find the clue as to the beginnings of Messianic expectation.


Such religious expectation would have been preserved through the generations by priests and prophets. In the Genesis story of the Woman and the Serpent we have a type of the Theotokos through whom Eve's disobedience is reversed. Satan is defeated by the Woman’s Seed (Gen. 3:15). Christians believe that Jesus is the Son of God, conceived by the overshadowing of the Holy Spirit, as the Angel Gabriel declared (Luke 1).

The expectation of Messiah was preserved through a priestly lineage that was carefully guarded and preserved through generations within the priestly lines. Priests married the daughters of priest (endogamy). This is evident in the analysis of the marriage and ascendancy pattern of Abraham’s ancestors, a pattern that continued to the time of Jesus.

The endogamous practice is alluded to in Mishna Taanith: “Four-score pair of brethren-priests took to wife fourscore pair of sister-priestesses in Gophne, all in one night.” It is alluded to also in Matthew's Gospel where Jesus' brothers and sisters are mentioned.


"Is not this the carpenter's son? Is not his mother called Mary? And are not his brothers James and Joseph and Simon and Judas? And are not all his sisters with us? Where then did this man get all these things?"

These brothers are also His cousins (Jerome) since the biblical Hebrew practiced clan endogamy. The Jews who doubted Jesus' identity as the Messiah recognized that Joseph and Mary had common ruler-priest ancestors.

The terms "cousin" and "brother" are sometimes interchangeable because of the marriage and kinship pattern of the Hebrew ruler-priests who practiced clan endogamy. In Hebrews, Lot is called the "brother" (adelphos) of Abraham, but in fact Lot was Abraham's nephew, the son of Abraham's brother Haran who died in Ur.

The Hebrew priests took great care in the selection of wives since the offspring would trace their blood lines through their mothers. This kinship pattern enables us to understand the relationship of Mary and Joseph, both of priestly lines. Mary's father was a priest, as was the father of Mary's mother. Joseph was her patrilineal cousin. Some of their ancestors are listed in Nehemiah.

In Nehemiah 7:39-42 the priests that returned from exile are named. "The sons of Jedaiah of the house of Jeshua, the sons of Immer, the sons of Pashhur, and the sons of Harim."

These names are associated mainly with the southern kingdoms of Judah and Edom. Harim is a Horus name. The name indicated the high rank of his priestly clan, which was said to have 320 adult males (Neh. 7:35). The root of the word is HRM which is also the root of "Horim." Jews call their ancestors the "Horim."

Hattush is a Hittite name. The Hittites of Hebron (Kiriath-Arba) were kinsmen of Abraham (Gen. 23:5, 6).

Malchijah is a variant of Melchi or Melki. This name appears twice in the ruler-priest ancestry of Mary (Luke 3:23–31).

Abijah is the priest line of Zachariah who married Elizabeth (Luke 1). Abijah was the eighth priestly division.

Obadiah is a royal name. It is related to Obodas, the first ruler of Petra in Edom. According to the Talmud, the prophet Obadiah was from Edom.

Mary’s parents were Joachim and Anne. Joachim was a shepherd-priest and his wife Anne was a daughter of a priest. Hippolytus of Thebes records that Mary’s mother was one of three daughters of a priest named Matthan (Matthias), probably of Bethlehem of Galilee. The eldest sister, Mary, was the mother of Salome; the second sister, Sobe, married a Levite and was mother of Elizabeth; the third sister was Anne, Mary’s mother. Mary’s cousin Elizabeth was the mother of John the Baptist. Elizabeth and Mary were cousins, and both daughters of priestly houses.

Herod had removed a High Priest named Matthias. He was the 61st High Priest and a descendant of David. The ancestral family of Jacob ben Mattat, once a favorite of Herod the Great, came to have limited political influence with the House of Zadok, as this lineage of King David’s descendants appears to have been ostracized from Jewish political life.

It is certain that Mary was of the ruler-priest class because even those who hated her admit this. Sanhedrin 106a says: “She who was the descendant of princes and governors played the harlot with carpenters.” It is said that she was so despised that some Jews tried to prevent the Apostles from burying her body. A legend tells of how "a certain Hebrew named Jephonias" tried to seize her burial bier and his hands stuck to it until he repented.


Mary is said to have been born in the grotto under the Church of St. Anne which would have been adjacent to the Temple, in an area where the Temple priests lived.

Mary's full name would be "Miriam Daughter of Joachim, Son of Pntjr, Priest of Nathan of Bethlehem." From pre-dynastic times among the Nilotic Horite Hebrew, ntjr designated God or the king. The name Pntjr is likely Pa-Netjer, the name of Joachim’s mother." A limestone stela (1539-1291 B.C.) bearing the names of Pekhty-nisu and his wife, Pa-netjer, is on exhibit at the Brooklyn Museum.

The connection between Bethlehem and the Horites is alluded to in I Chronicles 4:4, which lists Hur (Hor) as the "father of Bethlehem." The author of Chronicles knew that Bethlehem was originally a Horite settlement in the heart of Horite territory. The prophets foretold Bethlehem as the birth place of the Son of God.

Before his marriage to Mary, Joseph was either an elderly widower with children of his own or Mary was his second wife. The latter is the more likely since Mary was Joseph's cousin and the second wife was almost always a patrilineal cousin (as was Keturah to Abraham).

Joseph’s father was Heli (also spelled Eli), and he was a priest. Joseph's family lived in Nazareth which was the home of the eighteenth division of priests, that of Happizzez (1 Chron. 24:15). The words happi and ntjr originate in the Nile Valley, as do the names of many of the ruler-priests listed by Luke and Matthew. Melchi, a name that appears twice in Mary's ancestry, means "my image" in Amharic, a language spoken in the Upper Nile.

The expectation of Messiah, preserved through thousands of years by the Horites, focuses on the line of Judah. Matthew 1:1–6 and Luke 3:32–34 are in agreement on that.

Luke 3:23–31 continues the list as follows (notice the recurrence of names, marked with an asterisk).

The name Matthan/Mattai and its variants appear six times in Luke’s list. The name derives from the word “gift” and can also refer to the “giving’ of Torah. Mattaniah means “gift of God” and is a name found among priests in I Chronicles.

Note the recurrence of names, suggesting cousin brides who named their first-born sons after their fathers. The name Er appears in the 7th generation from Judah. This suggests that Judah's son Er, who married Tamar, had another wife besides Tamar. This would be consistent the with Horite ruler-priest marriage pattern. This might explain Er's refusal to produce an heir by Tamar for his deceased brother (levirate marriage). Tamar must have been Er’s patrilineal cousin. The firstborn son of the cousin bride could potentially become a very powerful leader in the territory of his maternal grandfather.

The Protoevangelium of James says that Mary’s father had flocks. This is a characteristic of priests in the Bible. They kept cattle, sheep and goats. Moses tended the flocks of his father-in-law, Jethro, the priest of Midian. A common image of God in the Old Testament is as the Shepherd (Psalm 80:1) and the priests of Israel are referred to as “shepherds” who have a responsibility to tend the flock of Israel. What could be more natural than for priests to maintain herds of animals for sacrifice? They learned to be good priests by learning the skills of a good shepherd. A good shepherd must:

- watch for those who prey on the sheep

- defend the sheep from attackers

- heal the wounded and sick sheep

- find and save lost or trapped sheep

- call them by name and know their individual quirks

- and earn their trust

This is why Jesus is referred to as Good Shepherd, High Priest and “the Anointed [Messiah] of God”, the term applied to David, a king-shepherd who, according to 2 Samuel 24, offered acceptable burnt sacrifice at the threshing floor of Araunah, the Jebusite.

Through Mary the first Biblical promise was fulfilled (Gen. 3:15). Jesus is the Seed born to the Woman (not Eve, since she isn't named until 5 verses later). The promise was made to Abraham's royal Proto-Saharan ancestors of Eden. They were priests before Levi, related to the priest Melchizedek. In Genesis 36 their descendants are called "Horites" which is Horim/Harim. They expected a woman of their ruler-priests lines to conceive by the "overshadowing" of the Creator whose emblem was the Sun.

Mary is the woman appointed by God to bring forth Jesus, the High Priest, the Good Shepherd, the Messiah, the Eternal King, and the Son of God. When she asked the Angel Gabriel how she would conceive, seeing that she was a virgin, Gabriel explained "You shall be overshadowed..." (Luke 1).

Is it any wonder that the Blessed Virgin Mary is venerated in the Church?

After 3.8 million years of human existence, Mary, the most pure person/woman ever in creation, consented to give flesh to a little child, God from all eternity.