In the Beginning God made the Heaven and the Earth 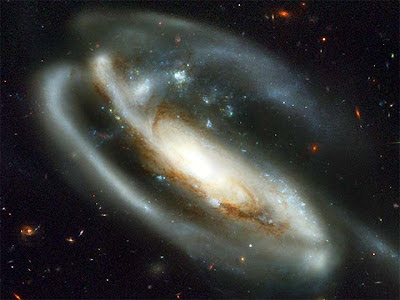 "Do not then imagine, O man! that the visible world is without a beginning; and because the celestial bodies move in a circular course, and it is difficult for our senses to define the point where the circle begins, do not believe that bodies impelled by a circular movement are, from their nature, without a beginning. Without doubt the circle (I mean the plane figure described by a single line) is beyond our perception, and it is impossible for us to find out where it begins or where it ends; but we ought not on this account to believe it to be without a beginning. Although we are not sensible of it, it really begins at some point where the draughtsman has begun to draw it at a certain radius from the centre. Thus seeing that figures which move in a circle always return upon themselves, without for a single instant interrupting the regularity of their course, do not vainly imagine to yourselves that the world has neither beginning nor end. "For the fashion of this world passeth away" and "Heaven and earth shall pass away." The dogmas of the end, and of the renewing of the world, are announced beforehand in these short words put at the head of the inspired history." Excerpt from The Hexaemeron, Homily I by St. Basil the Great
Posted by Alice C. Linsley at 11:27 AM

So much awesome wisdom is revealed in just that verse of Hebrew.

There's the mysterious omission of the definite article... it is "in beginning", something much greater than any human sense of a fixed point in time or place. (John does the same thing, in Greek, in his Gospel Prologue - "In beginning was the Word...")

Then there's the verb for create - a verb used ONLY to express creative action by God.

As that wonderful Homily suggests, "Just 'cuz we don't get it, don't mean it ain't so."

"In the Beginning God created": the Beginning is Christ. (The Jews were right about this verse teaching duality ... though, I think, they themselves would agree that everything has its beginning in God ... or, more precisely, in God's creative Word).

The faith of Abraham's Nilotic ancestors was not dualistic.

The creation was a singular event driven by the synergy of the Holy Trinity which always was and is and ever shall be.

John 1:3 says that everything that was created in the beginning was created from nothing (creation ex nihilo). In other words, God did not create from pre-existing elements or from the substance of a previous world.

Contrary to Democritus and Anaximander, the Bible teaches that God fashioned all worlds from nothing. Hebrews 11:13 says, "By faith we understand that the worlds were prepared by the Word of God, so that what is seen was not made out of things which are visible."

Basil the Great argued against Anaximander's view that a world is created by the spiraling motion of the four interactive elements. He declared, "Do not then imagine, O man! that the visible world is without a beginning; and because the celestial bodies move in a circular course, and it is difficult for our senses to define the point where the circle begins, do not believe that bodies impelled by a circular movement are, from their nature, without a beginning." (The Hexaemeron, Homily I)