Celestial Symbols that Speak of God

East and north are the key reference points in Biblical cosmology. East is associated with the rising sun and the arousal of God. East is easily identified by watching for the first sun rays at dawn. It is easy to know west once east has been identified. To Abraham's Horite people east represented new life, youth and vigor. West represented maturity, full strength and the future.  Horus, the son of the Creator God Re, was said to rise in the east as a lamb or calf and to set in the west as a ram or bull. This is the key to understanding the story of the binding of Isaac.  Isaac asked his father, "Where is the lamb for the sacrifice?"  Abraham answered in faith that God would provide the lamb, but instead God provided a ram. By this Abraham would have understood that Isaac was not the promised Son who would rise from the dead. That Son would come in the future. 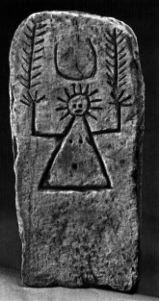 North is associated with divine judgment. It is identified by observing the polar star, a fixed point in the heavens. The Pole Star was seen near Alpha Draconis 4000 years ago at the time of the construction of the Great Pyramid of Giza. This was a reference point in the Pharaoh's hope of resurrection.  This is indicated by the fact that the entrance passages of six of the pyramids are inclined downwards at such an angle as to make the Pole Star visible perhaps even in daylight.

East-west and north-south are binary sets. Within these sets one was regarded as greater than the other. So east was greater than west because it represented God rising. Likewise north was regarded as greater than south because of the fixed position of the Pole Star. So east and north are the primary astronomical and religious points of reference and are associated with divine arousal (east) and divine judgment (north). West and south are their binary opposites. West generally represents the future and the Eschaton, and South represents earth, burial, fertility and marriage.

Among Abraham's people the sun was the emblem of the Creator. The glory and sovereignty of the Lord God were exemplified in the Sun's apparent journey from east to west and the shedding of light and heat over all the earth's surface. We see this in Psalm 113:3: "From east to west the name of the Lord is praised." And in Psalm 19:6: "He places in the heavens a tent for the sun, who is like a groom coming forth from the chamber, like a hero, eager to run his course. His rising-place is at one end of the heaven, and his circuit reaches the other; nothing escapes His heat."

Among Abraham's people the sun was venerated as the emblem of the Creator. They would have conceived of God as the Great Chief who daily makes his circuit between the two wives dawn and dust. This is why none of the rulers listed in Genesis placed their wives on an east-west axis, except for the Lamech who posed himself as God's equal. Bible scholar Theodore Gaster noted this, explaining that the names of Lamech's two wives, 'Ada' and 'Tzilla', suggest dawn and dust (The Schocken Bible, Vol. 1, p. 28).

Imagine if the writers of the Bible had been from the Paleo-Siberian culture, where there are long periods of darkness and long periods of daylight. Were that the case, we would find a theological perspective that reflects that phenomenon. Such a perspective would not be a one with which most cultures could relate. Nevertheless, even the shamans of the Arctic recognize at least the four cardinal points and conceive of them as bisecting lines, presenting us with a cross-shaped Reality.

The cosmology of the Afro-Arabian peoples provides the framework for the whole Bible and is especially evident in the book of Genesis. It is from them that Jews, Christians and Muslims receive the tradition of facing east in prayer. The temple in Jerusalem was aligned to track the Sun's light and the pyramids in Egypt faced the east.

The cosmology of the Afro-Arabian and Nilo-Saharans is also represented in the cross-shaped Egyptian Ankh. The loop at the top symbolizes the sun. The cross bar represents the Sun's daily journey from east to west. The Ankh is similar to the Agadez cross of Niger (shown below at left) and to the Carthegian Sign of Tanit which often bears the letters TNT (shown at right.)

A similar image with the TNT inscription was found in the temple of Eshmun near Sidon. It dates to about the 5 century B.C. Assignment of the name 'Tanit' is guess work, however, since no one knows how TNT should be transliterated. There has been speculation that Tanit is a goddess and that her devotees practiced infant sacrifice. There is very little evidence to support his view however.

All the cross-like images of Africa have the solar symbol over a horizontal bar representing the East-West movement of the Sun. The horizontal bar rests in perfect balance on the top of a triangle. The triangle likely represents a mountain. In the tradition of the Afro-Asiatics, the mountain rising into the heavens was a place of meeting between God and Man. The Sun, a symbol of the Creator, is shown at the the sacred center of the mountain top. Consider the many incidents in the Bible of God self-revealing or making miraculous provision on the tops of mountains:


The Negative Image of the Sun

The horned altar is another image signifying God's sovereignty over the Earth, only the image of the sun has disappeared. The horned altar is an apophatic rendering of the Sun/divine image. Apophatic means “unspeakable” and making the Sun invisible means that no one is tempted to worship the creation above the Creator. This dates to a later time than Abraham, when the Israelites rejected the old solar representation of God. That the sun was not to be worshiped is evident in Psalm 148:3, which says "Praise Him, sun and moon, praise Him, all bright stars." In the horned altar, God's presence is evident in the negative space since God cannot be presented as something created. St. Hilary of Poitiers (4th century A.D.) expressed it this way: “The proper service of faith is to grasp and confess the truth that it is incompetent to comprehend its Object.”

That the horned altar and the symbols of Agadez and TNT share a common cosmology is evident when one compares the altar and the so-called sign of Tanit. The upright horns are similar to those on the Tanit symbol shown at right.

Interestingly, the metal working chiefs of the Inadan who live in the Air Desert surrounding Agadez, maintain two wives in separate households on a north-south axis, as did the Horite chiefs of Abraham's people. The Inadan metal working caste speaks a secret language which they call TeNeT and they claim to be related to David of Judah (National Geographic, Aug. 1979, p. 389).


Related reading:  The Sun and Moon in Genesis; Solar Imagery of the Proto-Gospel; A Tent for the Sun

Have you read the book, Jesus Christ, the Sun of God, by David Fideler? I am reading it now and am pretty fascinated by it. Any thoughts?

I haven't read the book, Arturo, but it sounds interesting. Tell me what strikes you most about his treatment of the subject.

You might write about Fideler's book and post something at your wonderful blog. Then I will link to your post. It is always a pleasure to read your work.

Father Mark Gruber has made this comment by email:

I consider the Egyptian Ankh to be a symbol of a much older pedigree than the Niger, Indus, Carthaginian etc. exemplars. Therefore it could well have given rise by diffusion to these various cultures. Still the east-west axis line and the solar disc sign is so deeply structured into human cultural awareness that the relevant interplay of various societies’ iconographies are virtually impossible to reconstruct. The solar disc lying upon the horizon line of east and west coincided with the Egyptian image of the key to the doors of the passage of the soul through the underworld… That is, placed on a pole held aloft (think of the serpent in the desert) the sign of the disc upon the bar was a ceremonial key to open the way through the night of eternity. This inversion of the dawn and dusk image gave the metaphysical darkness of death a dawn to open it up. The Christian Copts would go to town!

Fr. Gruber is the author of “Journey Back to Eden” (Orbis Books) and an ethnography of the Copts, “Sacrifice in the Desert” (University of America Press).

I agree that the Ankh represents an older cosmology. This is evident in its simplicity also.

The diffusion's center appears to be Africa, not Mesopotamia. This is what one would expect since analysis of the kinship of Abraham's ancestors in Genesis 4 and 5 reveals that they lived in central Africa. As you have said, “Genesis is even more determined than Exodus to give the patriarch’s an African anchoring.”

Arturo, I just finished reading Fideler's book and found it very interesting. It is very strong on the Hellenistic connection to Heliopolis and the unitive principle (the Pleroma in RC theology). He also makes the connection to the structures of Egyptian, Greek and Babylonian temples. It was refreshing to read someone who sees how Platonism emerges from an older context. Too often when reading western philosophy one gains the impression that everything started with Socrates, Plato and Aristotle. He also shows how the old cosmology appears in Kabbalah, and is quite correct that 888 was assigned to Christ, but this is followed by 999 which is the symbol of the eschaton and the consummation of the kingdom. The book seems not to make many connections between the old solar worldview and the coming of the new world, or did I miss that?

Just to add in an attempt to give meaning to RA or RE via a Luo worldview. No one one has tried to give meaning to these two titles.RA means He is/I am, RE means He is.but he surpases human attributes. RA and RE are suffixes or prefixes to one's attributes so as to let him attain a name. Kwar is red. Rakwar, the red one, char is white, Rachar, the red one. AMUN RE will have all the attributes of Amun.Achan, do Ra(Luo), I have all the attributes of Achan (I am needy) Ra'chan or Ja' Achan( poor person). Achan is a popular Acholi name with meaning just like the biblical Achan. Ra/Re would mean I AM... with no words to fill the attributes.O'bama or Ra'bam(he is' crooked) are versions of the same name to mean crooked/disabled

Thanks, John. This is helpful and very interesting. I am tracing the origin of some Biblical names and wonder about to the prefix/suffix ra in these women's names:

Also in Hebrew ohol is tent/desert tabernacle and bama means exalted. So Esau's wife's name - Oholibama - suggests a woman of high rank and of the priestly caste. What are your thoughts?