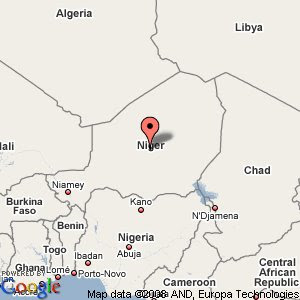 The oldest known cemetery in the Sahara dates to 7500 B.C., about 3500 years before the time of biblical Noah. The material evidence indicates a settled population at the edge of a very large lake or trough, possibly Lake Mega-Chad which connected to the Benue Trough.

The initial discovery was made by National Geographic photographer Mike Hettwer in 2000, and the excavation work was led by University of Chicago archaeologist, Paul C. Sereno, famous for his discovery of dinosaurs.

Noah lived around 4000 B.C. in the region of Lake Chad when the Sahara was wet. About 7500 B.C., at the time that this graveyard was used, Lake Chad had an area of about 249,000 miles. It is likely that the graveyard that Paul Sereno uncovered was originally at the edge of Lake Mega-Chad.
According to a recent report about the cemetary site, "The burial density, tool kit, ceramics, and midden fauna suggest a largely sedentary population with a subsistence economy based on fishing and on hunting of a range of savanna vertebrates."

Bor'No, in the Chad Basin, means "Land of Noah." This is the only place on Earth that is claimed by the natives to be Noah's homeland. 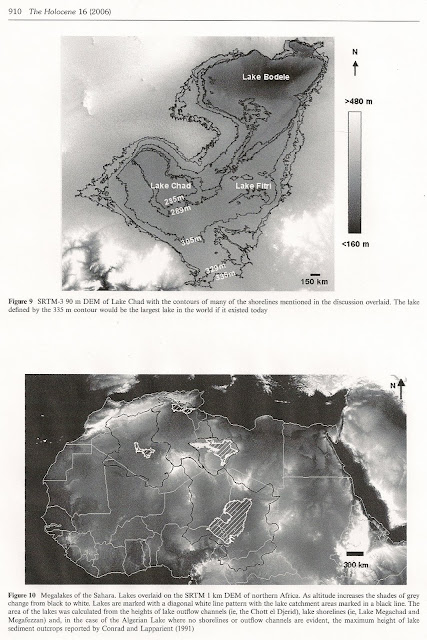 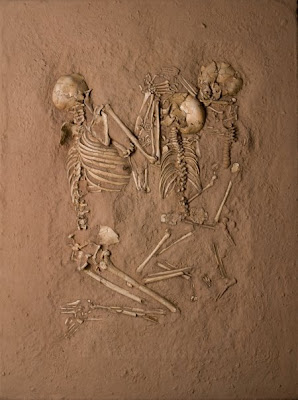 Sereno has once again made a name for himself. He has what is now the largest collection of Early to Mid-Holocene bones ever discovered at a single site in Africa. When I asked him about the frequency of triple burials such as that shown in the photo to the right, Sereno replied that "There is only one triple burial, and only one ever found like this."
In an email communication with me, Sereno reports that, "It is a woman and 2 children of 5 and 8 years."

According to Sereno, the Early Holocene people left when it became arid, but the area was repopulated by a taller people around 4600 B.C. when humid conditions returned. That is the time of Noah whose descendants are described as tall in the Bible.
The residents of the area experienced flooding as the region was much wetter than today. There was flooding on and off over a long period, and wet conditions prevailed from 7700-6200 (phase 2).
Sereno states, "The darkened bone color of all human skeletons in phase 2 burials is indicative of sustained inundation." (Read about Sereno's findings here and here.)

Another wet period corresponds to the time that Noah would have lived in the region of Lake Chad, between 4000 and 3000 B.C.