Heaven or Heavens: Does it Matter?

When studying the Scriptures it is wise to use different versions. I place three versions side by side and pay attention to the differences as they are often very instructive. Such is the case with the rendering of Genesis 1:1, which tells us: In the beginning God created the heavens and the earth.

Three versions speak of God creating "heaven and the earth" (Jewish Study Bible, The Orthodox Study Bible, and the New Jerusalem Bible). Three other versions speak of God creating the "heavens and the earth" (The Schocken Bible, The New International Version, and La Version Reina-Valera). It is interesting that none of these six versions includes a footnote allowing for the alternative form. The difference doesn't seem to matter to the editors of these versions, and yet it does matter!

The plural form 'heavens' suggests a different cosmology from the singular form. Surely the distinction between heaven and heavens is important since Genesis 1 is about the creation of the cosmos.

'Heavens' is the more accurate rendering as attested by the Hebrew word 'shamayim' which is a plural form. The plural suggests the concept of a multi-layered or tiered cosmos. When the Apostle Paul speaks of being mystically transported to the third heaven (2 Cor. 12:2), he is interpreting his experience in the context of a specific worldview. His account is "emic", that is, meaningful in the context of his specific Afro-Asiatic cosmology.

Using comparative linguistics we are able to reconstruct a connection between the Afro-Asiatic languages. The Sanscrit word for sky or heaven is 'svah', which corresponds to the Semitic 'svam' or 'sham-yim'. The Semitic resembles the Proto-Dravidian (7000 - 6000 B.C.) 'van', meaning heaven. The word for attic or upper room in Spanish is 'desvan' which is related to the verb desvanecer, which means to vanish as smoke rising into the sky. This appears to be borrowed from the Arabic. (Readers will recall that the Arabic-speaking Moors dominated much of the Iberian Peninsula for over 700 years. Their linguistic contribution to Spanish is considerable.)

Genesis 1:1 too often receives interpretation from the perspective of an observer who stands outside the Afro-Asiatic context (an etic account). Ignoring the specific Afro-Asiatic context often causes readers to miss some of the significance of the first and second creation stories.

Chapter one speaks of the creation as it is experienced on the seventh day, the day awaiting a new eighth day. Chapter two speaks of creation as paradise, an existence in which God walks with humans in "the cool of the day". In paradise there is no distance between God and Man, but in the first creation story God is on high, above the seventh heaven, where no mortal can enter.

This concept of seven heavens is found in the Qur'an also. "It is He Who created everything on the earth for you and then directed His attention up to heaven and arranged it into seven regular heavens. He has knowledge of all things." (Qur'an, 2:29)

"Then He turned to heaven when it was smoke. In two days He determined them as seven heavens and revealed, in every heaven, its own mandate." (Qur'an, 41:12)

It is well docmented that the Babylonians, another Afro-Asiatic people, believed in a seven-layered heavens. In the Prophet Daniel we read how Darius, having taken over the Babylonian kingdom, issued a decree that the people should reverence the God of Daniel who "performs signs and wonders in the heavens" (Dan. 6:27). The Babylonians conceived of t 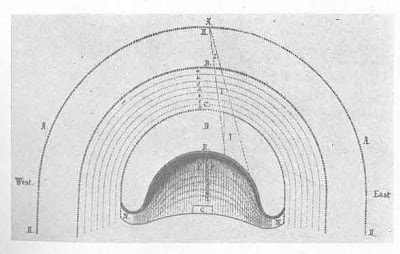 he universe has having seven heavens and seven hells. Above the seventh heaven was the "highest heaven", divided into upper and a lower portions. (See figure to the right.)

The multi-tiered heavens signifies distance between God and Man. This conception presents God as transcendent, unknowable and unreachable. On the other hand, the paradise story (Gen. 2) speaks of God as being intimately close and able to enjoy the pleasures of earth.

Do we have contradictory worldviews or do these different conceptions together speak of a metaphysical reality? The ancient Hebrews believed that when God was offended by human acts, God turned His face away from Man. Turning away one's face signals loss of intimacy or a distancing from the other. Paradise is lost when God turns His countenance from us (Gen. 3).

If we look to Africa, we find many stories that explain how the distance between God and Man came to be. These involve the withdrawing of God from earth. Consider the following story related to anthropologist Charles Kraft while he was studying tribal peoples in northern Nigeria.

Kraft asked, "What did your people believe about God before the missionaries came?" In response, an old chief told this story:

Once God and his son lived close to us. They walked, talked, ate, and slept among us. All was well then. There was no thievery or fighting or running off with another man's wife like there is now. But one day God's son ate in the home of a careless woman. She had not cleaned her dishes properly. God's son ate from a dirty dish, got sick, and died. This, of course, made God very angry. He left in a huff and hasn't been heard from since. (Charles Kraft, Christianity in Culture. Orbis Books, 1990, p. 153)

Some African creation stories speak of a time at the beginning when the sky was low. It was necessary for people to be careful while cultivating or pounding grain to avoid striking God's resting place with their hoes or pestles. The Akan of Ghana tell the story of how God once lived on earth, but an old woman kept striking Him with her pestle. Then one day, God withdrew to the sky. The vertical pestle symbolizes the north-south axis and the heavens-earth-under the earth axis.

Another African story tells how "in the beginning death had not yet entered the world. There was plenty to eat, but a women became greedy and tried to pound more grain that she was allotted. This required using a longer pestle. When she raised it to pound the grain, it struck the sky and God became angry and withdrew far into the heavens. Since then, people must toil the earth, death and disease troubles the people and it is no longer easy to reach God." (Richard Bush, ed. The Religious World. MacMillan Publishers,1982., p. 38).

When we seek to understand Genesis 1 from the context of the Afro-Asiatic peoples, we discover a subtle relationship between the two creation stories and the story of the Fall in Genesis 3. They speak of God as transcendent yet among us, as distant yet intimate. The assertion that the heavens are layered is an essential part of the picture that Genesis presents.


Related reading:  The Genesis Creation Stories; The Sacred Center in Biblical Theology; The African Context of Biblical Material; The Cosmology of Abraham's People
Posted by Alice C. Linsley at 6:00 AM

You quote from a book by Charles Kraft. He and his wife are old family friends of my parents and I was a TA for a few of Meg Kraft's anthropology classes before she retired at Biola in CA. :)

Also, the connections between tribal stories and the Genesis account reminded me of the book Eternity in Their Hearts by Don Richardson. Have you read this book and what are your thoughts on it?

I read the book in the 1980s and found it very interesting how God has communicated "in" culture an outline of the heart of the Gospel. All that is needed is for a missionary or a messenger to point to Jesus Christ Who was, is, and ever shall God's Peace Child.

I commented just because I think it appropriate to mention that I took this post in consideration when writing a 7-part article on maximilion.wordpress.com on the topic of Genesis 1.

I'd like to read your thoughts on these articles.

You obviously are thinking deeply about the Science vs Religion debate. Playing the devil's advocate is a good way to expose fallacies on both sides. The polarization, in my opinion, is a fantasy spun by an ignorant and drama seeking media. The data of Genesis is supported by the findings of many sciences.

The Young Earth Creationist position is not a biblical one. It is an interpretation based upon 5 false assumptions which I address. You will find the first one here:
http://jandyongenesis.blogspot.com/2012/04/false-assumption-1-of-young-earth.html

Best wishes to you!

Heaven as in the dome above. Very likely.

There is also the 7-layer conception - heavens - that is reflected in the 7-tier temple, following John Walton.