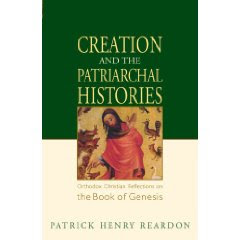 Patrick Henry Reardon's commentary on Genesis, Creation and the Patriarchal Histories (Conciliar Press, 2008) is thoughtful, well referenced, and theologically sound. Father Reardon is pastor of All Saints Antiochian Orthodox Church in Chicago, and Senior Editor of Touchstone: A Journal of Mere Christianity. A former Anglican, he came to Orthodoxy in 1988.

Fr. Reardon was educated at Southern Baptist Theological Seminary (Kentucky), St. Anselm's College (Rome), The Pontifical Biblical Institute (Rome), the University of Liverpool (England), and St. Tikhon's Orthodox Seminary (Pennsylvania). In this book, he offers "Orthodox Reflections of the Book of Genesis", drawing on the writings of St. Augustine, Cyprian, and the Jewish historian Josephus, but he doesn't insist that there is an Orthodox approach to Genesis.

Fr. Reardon has written other excellent books, also available from Conciliar Press (800-967-7377). These include Christ in the Psalms and The Trial of Job. His latest volume, Creation and the Patriarchal Histories, is important reading for those seeking a readable commentary on Genesis. The book isn’t long and one need not hold a Doctorate in Biblical Studies to understand what is written.

I found the book to be fresh in many ways. It nods to Mosaic authorship but doesn’t insist on it. Fr. Reardon explicitly states that there is “strong evidence that the arrangement of the five books is later than Moses” (page 10). Based on internal evidence, I have argued that the Genesis material was brought together during the time of David and Solomon. This is the probable source of the strong Messianic material in the book, especially that touching on the ruler-priest, Melchizedek, and on the priority of the youngest sons over the first-born sons.

Fr. Reardon also doesn’t insist that the authority of Genesis is dependent on an original autograph, but instead upon the superintendence of the Holy Spirit throughout the centuries (page 11). It is refreshing that he values the Septuagint and the Hebrew texts equally.

He maintains that the Bible's understanding of history is "the key to its understanding of Genesis." He writes, "The human authors of Holy Scripture approached Creation itself through the path of salvation history. They arrived at the knowledge of the Creator through their knowledge of the Lord of history. It was Exodus that led them to Genesis!" (p. 26)

I'm not sure why he feels that it has to be one way. The Divine Author isn't restricted by the linear chronology of human scribes. In fact, this idea seems to undermine one of Fr. Reardon's most significant points: that creation is mediated through Christ, begotten of the Father from before time (pp. 28-30). Genesis reveals the timelessness of the Triune God.

Genesis speaks of events and people who lived by faith long before the Bible Canon was decided. Fr. Reardon recognizes this, pointing to the example of Enoch (pp. 55-56). Ultimately, Genesis is about the Kingdom of the Triune God. That Kingdom includes those who died in faith before the dispensation of the Church and those who are in Christ in the Church. This is typified by the rulers of Genesis having 2 brides in order to establish their kingdoms. (Fr. Reardon does not mention the practice of Afro-Asiatic chiefs maintaining 2 wives in separate households on a north-south axis, and he misses the significance of the "hidden" Son.)

Genesis makes it clear that Father Abraham experienced the Triune God as his Savior. These concepts are not back-written into the text at a latter date. Abraham actually experienced the Triune God in Genesis 18 as his Savior. (There is an ancient Semitic word for the Triune God - Baal Shalisha - usually rendered the 'God of 3 powers' or 'the third idol' which suggests a shrine dedicated to this God.) In Exodus, we are told that the nation of Israel shared this same experience of God. It is not necessary to assume discontinuity between Abraham's individual experience and the corporate experience of Israel, especially since Jacob's children are heirs of Abraham's Afro-Asiatic worldview, and God is always One and the Same.


The book would have been strengthened by an overview of the Afro-Asiatic worldview, about which there is now a good deal of information from Linguistics, Cultural Anthropology and Archaeology. For example, in his Ecursus on Exodus in Genesis (pp. 68-70), Fr. Reardon writes, "Doubtless the ancients loved those narratives in Genesis, but their major interest was in the rules and regulations that followed them. For them, the important thing was the Law, the Torah... revealed on Mount Sinai." Here Fr. Reardon fails to make a distinction between the practice of Torah and the Mosaic Law. The former was clearly in evidence among Abraham's people. Torah means "instruction" and Abraham received instruction at the Oak of Moreh, between Ai and Bethel, just a Deborah gave instruction - torah - at her palm tree between Ramah and Bethel.

By overlooking the geneological patterns in Genesis, Fr. Reardon has missed the similarity between Abraham and Moses, the similarity between Keturah and Tamar, and the scarlet cord that weaves through two passovers. The Church Fathers often noted these patterns, as did St. Paul, and used them to instruct in righteousness.

The devotional quality of Fr. Reardon's book is as remarkable as the scholarship. There are moments when he soars into worship. Here are some samples:

"After Sarah, Abraham would be buried in the same place, along with his son, his grandson, and their wives; all of them rest at Hebron still, awaiting the return of that One who, for a very short while, lay in the grave of the Arimathean." (p. 92)

"Contrary to the assertions of countless preachers, then, it is not the function of a Christian funeral to put someone in his "final resting place." On the contrary, the very wording of a Christian funeral should go out of its way to emphasize that burial itself is a purely temporary housing arrangement... This is our final affirmation that 'Jesus is Lord'; namely, that He is Lord of the land, the true Landlord, proprietor of the real estate bought with His blood. And affirmed in the proclamation is the godly guarantee that this Landlord will duly serve eviction notices on us all, on that final day when Israel goes forth from Egypt and the house of Jacob from a people of alien tongue." (p. 156)