What if Henry had only 2 Wives? 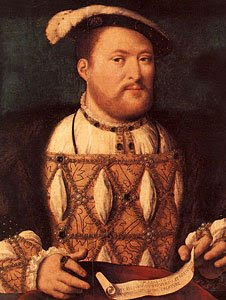 I invite readers to think about and comment on this discussion question: What if Henry VIII had taken only 2 wives, as did the rulers among Abraham’s people?

Assuming that Catherine of Aragon was the first wife/queen and Anne Boleyn the second, would this have put an end to Henry's need for a male heir?

Would the succession wars have been fought between 2 sons instead of 2 daughters?

Would Edward VI have been enthroned?

Would this arrangement have served any practical purposes?

Would lives have been spared?

How would 2 wives have affected events such as:

· the beheading of Anne Boleyn (Queen Elizabeth’s mother)?
· the succession tug-of-war between Mary (Catherine's daughter) and Elizabeth I?
· the blending of Catholicism and reformed ideas under Elizabeth I?
Posted by Alice C. Linsley at 10:05 AM

That's a hard one to answer! Perhaps if Henry had given Anne a chance she would have gone on to successfully give him a longed for son. He didn't give her much chance seeing as they were only married for just over 3 years.

Edward VI would never have been born, unless Henry took Jane Seymour as a mistress, but then would he have legitimised Edward? Who knows?

Would lives have been spared? Yes, if Henry had kept Anne, her life and those of the 5 men executed for treason and adultery would have been spared and probably Cromwell's life too.

I think that had Henry kept Anne as his wife and queen, Elizabeth would have been first in line for the throne and would have succeeded him, unless Anne went on to have a son. Mary would still be seen as illegitimate, due to his and Catherine's marriage having been annulled and having never been vaild.

As far as religion was concerned, perhaps Anne's reformist ideas would have had even more influence on Henry and so the country would have become more protestant and Mary's catholic reign would never have happened. Elizabeth would have carried on in her father's footsteps.

The Afro-Asiatic rulers of Abraham's people took 2 wives to establish their kingdoms. The wives lived in separate households/settlements on a north-south axis. This increased the likelihood of a male heir and often there were two first-born sons. The choice of succesor was the Patriarchs and according to custom, the next ruler was the oldest son. However, the right of primogeniture often was not granted (no entitlements when it comes to God's plan) because God exercised a more sovereign choice of the youngest sons - Abel over Cain, Abraham over his older brothers, David the youngest of Jesse's sons.

If Henry had been permitted to have Catherine AND Anne as wives, many lives would have been spared and there likely would have been greater stability. Of course, sons by concubines would not have played into the picture at all. Under this arrangement I doubt that Edward VI would have been the King's choice, being sickly from an early age. But then, Edward is responsible for the 1549 Book of Common Prayer - the first version of the greatest prayer book ever prepared! So perhaps God has shown His hand afterall.