Then Jesus was led up by the Spirit into the wilderness to be tempted by the devil. And after He had fasted forty days and forty nights, He then became hungry. (Matthew 4:1,2)

Numbers are an interesting and useful device in tracking the tribal and ethnic origins of a document. For example, the Chinese avoid using the number four, which they regard as a bad omen, yet four is a sacred number to the Plains Indians of North America and is used in their ceremonies. The number four, representing the directional poles, is an essential part of preparing the ground for the Oglala's Vision Quest.

The cultural origin of some biblical narratives can be tracked using number symbolism. The Bible comes to us from the ruler-priests of the ancient world whose number symbolism can be classified into early Proto-Saharan and later Babylonian traditions. In the ancient tradition the number forty appears as a reference to the Nile, and is less significant in the Babylonian tradition.

For example, the story of Noah's flood speaks of rain for "forty days and forty nights", but in the Book of Daniel, which is rich in number symbolism and has a Babylonian context, the number forty doesn't appear even once. The evidence of Genesis suggests a Nilotic context for the flood story. In the time of the African Humid Period, the Nile connected to lakes in the desert which connected to major rivers and Lake Chad. So it is possible that Noah's flood took place in the region of  Lake Chad in west central Africa.

The red area in Africa shows how the Y-DNA Haplogroup R1 populations living between the Nile and Lake Chad were connected. 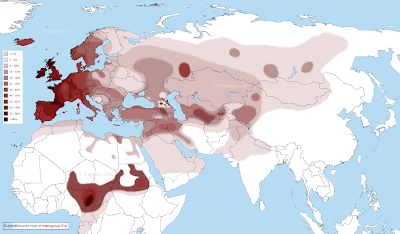 The number forty in the western Afro-Asiatic tradition relates to the periodic forty day flooding of the Nile when people living near the banks had to leave their homes. The second forty relates to the additional forty days they had to wait for the waters to recede before they could return to their homes.  The Coptic monks speak of the forty days, always aware of the connection to the periodic flooding of the Nile which dispersed nutrient-rich silt over the farm land. Read here about a Coptic monk's understanding of Genesis.

Noah was a Proto-Saharan ruler in the region of Lake Chad at a time when water systems connected the Nile and Lake Chad. The context of the phrase "the forty days and forty nights" of rain is Nilotic, not Meopotasmian. Likewise, Israel's forty years of wandering in the wilderness indicates that this narrative reflects a Nilotic context, rather than a Mesopotamian context.

Related reading: Number Symbolism in the Bible; Discrepancies are Evidence of Authenticity

I've got a question not related directly to this post. The Genesis genealogies list that X became the father of Y and lived Z many years. I've seen some suggest that statistically there is a non-random array of total years. Any thoughts on the significance of the number of years in these texts?

The years ascribed to these rulers of old are symbolic. To understand the numerical meaning we need to gain more understanding of the Afro-Asiatic number symbolism. These numbers are definitely not random. You might find this helpful:

The 40 days & nights are not symbolic. It describes the monsoon in Yemen which gets a twice yearly six week monsoon. This is the area where the incense, gold and exotic goods trade originated. The trade was both by land and sea or the port of Aden. Yemen also experiences tsunamis which originate in the markan subduction zone. The last tsunami to hit the coast of Yemen originated in the Indian Ocean in 20004. The biblical monsoon flooded the mountains wadis and the tsunami flooded the coast causing catastrophic flooding and loss of life. According to the Quran, the surviving members Noah's tribe migrated east to Oman and intermarried with the Aad of Iram or 'the numerous ones of Aram'.

The monsoon in Yemen is not questioned. The cultural context of Abraham's ancestors, however, is Nilotic, and the Nile waters flooded for forty days. See this: