The association of blood and crosses can be traced to prehistoric times. The first man was formed from the red earth (Gen. 3). This is the etiology of the word Adam, or ha-dam, meaning the blood. The Hebrew word for red/ruddy is edom. The word edom and the Hausa odum and the Hebrew adam originally referenced the red clay that washed down from the Ethiopian highlands. These soils have a cambic B horizon. Chromic cambisols have a strong red brown color.

The blood-colored substance that is found naturally around the globe is red ochre or hematite (from the Greek word for blood, haema). When hematite powder is mixed with water is looks like blood.

The oldest site of red ochre mining is in the Lebombo Mountains of southern Africa. This ore was ground to powder and used to paint sacred objects and to bury the dead. The red ochre represented blood and the power of blood as a symbol of life. It implies an impulse to immortality among archaic populations of Africa.

In the cosmology of the Nubian's southern ancestors blood was associated with crosses. This is evidenced on the Blombos Cave artifact found in southern Africa. It is a red stone etched with X around the edges (see right).

This is the oldest known symbolic artifact and the plaque was likely taken from mines that were in operation about 80,000 years ago in the Lebombo Mountains. This was the site of major mining operations, as Stan Gooch explains:


One of the largest sites evidenced the removal of a million kilos of ore. At another site half a million stone-digging tools were found, all showing considerable wear. All of the sites in fact produced thousands of tools and involved the removal of large quantities of ore; and while some were open quarries, others had true mining tunnels.

In the Lebombo Mountains H.B.S. Cooke and his associates discovered a human burial dating between 46,000 and 80,000 years old. The burial is that of a small boy buried with a seashell pendant and covered in red ochre.

The use of red ochre in burial was widespread in prehistoric times. A man buried 45,000 years ago at La Chapelle-aux-Saints in southern France, was packed in red ochre. “The Red Lady of Paviland” in Wales was buried in red ochre about 20,000 years ago. Her skeletal remains and burial artifacts are encrusted with the red ore.

Two flexed burials were found in Mehrgarh, Pakistan with a covering of red ochre on the bodies. These date from about 5000 BC. The ‘Fox Lady’ of Doini Vestonice, Czechoslovakia, who was buried 23,000 years ago, was covered in red ochre.

A 20,000 year old burial site in Bavaria reveals a thirty-year-old man entirely surrounded by a pile of mammoth tusks and submerged in red ochre powder.

The idea that blood is the substance of life seems obvious to us moderns who have learned some human anatomy and physiology. What is less obvious is the basis of blood for rebirth or life after death, a concept assigned to the realm of theology and therefore dismissed by most people.

From earliest times man observed that death occurred when an animal or human bled out. Blood was recognized as the substance of life.

Among Abraham's ancestors the resurrection of the ruler meant the salvation of the people. He was expected to lead them from life to the greater life, passing decisively through death. In pre-dynastic times and in the earliest dynasties people were believed to follow their deified ruler from this world to the next. Their immortality depended on the bodily resurrection of their king.

Proto-Saharan nobles were buried with red ochre at Nekhen in Sudan (3500 BC). Nekhen was a Horite shrine city dedicated to Horus whose totem was the falcon or hawk. Early dynastic Egypt adopted the Horite religion and never practiced cremation, as in the religions that seek to escape physical existence (samsara). Abraham and his Horite ancestors believed in the resurrection of the body and awaited a deified king who would rise from the grave and deliver his people from death.

Cultural anthropology and genetic studies shed light on the etiology of the association of blood and rebirth or resurrection. The anthropological, linguistic and genetic evidence indicates that Abraham's ancestors were Proto-Saharan and Nilotic peoples, probably Nubians. The Nubians have their own genetic marker which indicates migration from the sub-Sahara to the Nile and there has been virtually no immigration into the lower Nubia area from Asia according to the Y chromosome study done by Lucotte.

Among the Nubians the sun was a central symbol of life and was often shown as a red orb. This lent the additional association with the red eye of Horus. In this ancient Nubian relief we see baboons facing the sun. Baboons chatter at the rising sun. (In other versions two lions or two leopards face away from the sun. They are sentinels or guards.) The ankh or cross symbol is found over the heads of the baboons. 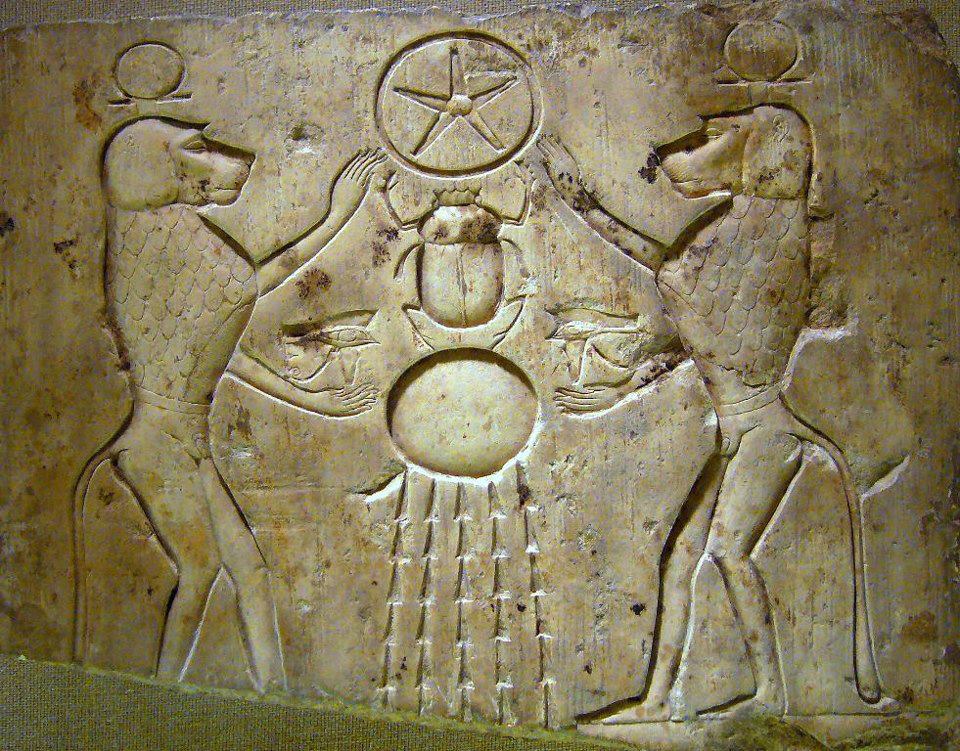 Some claim that this image represents Duat which they interpret as the cycle of reincarnation or the transmigration of souls. However, the Duat of ancient Egypt is not the same as Samsara. It is about the mirror image of the cosmos patterned on the Sun's rising and setting. The long expected ruler rises from death with the sun on the third day.

Oh Horus, this hour of the morning, of this third day is come, when thou surely passeth on to heaven, together with the stars, the imperishable stars. (Pyramid Texts Utterance 667.1941b)

The body of the dead ruler was carried in procession to the tomb or pyramid, his retinue following behind. The procession to the tomb was the earthly journey that would be continued beyond the grave at the deified ruler's resurrection. This stands behind Paul’s description of Jesus Christ leading captives from the grave to the throne of heaven. This is why it says: When he ascended on high, he led captives in his train and gave gifts to men. (Ephesians 4:8)

In the image above, the eyes of Horus are seen to the right and left of the rising sun. This establishes the theological context as Horite. Abraham's ancestors were devotees of Horus, the seed or son of Ra. He was born of Hathor-Meri, a virgin queen who conceived by the overshadowing of the sun. Her totem was a cow and she is shown at Nile shrines holding her infant in a manger. Here we have elements of the Proto-Gospel and evidence that Messianic expectation is based on the Edenic Promise (Gen. 3:15) made to Abraham's Proto-Saharan and Nilotic ancestors.


Related reading: Of Dung Beetles and Red Herrings; Three Specimens to Ponder, Water and Blood; Resurrection as Mirrored Reality; The Scarlet Cord Woven Through the Bible; The Horite Ancestry of Jesus Christ; The Solar Imagery of the Proto-Gospel; Sheol and the Second Death; Christianity Lacks Originality; Life is in the Blood