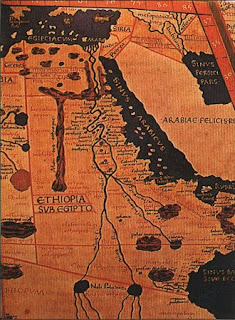 Ganga in Omotic is related to words meaning river. Other words like sanga (“having limbs”) suggest the meaning of the intervocalic "ng", which in Sanskrit appears in words associated with tributaries, extensions, off-shoots, or limbs. This is the meaning of the River Ganges.

This map of the Nile drawn by Ptolemy is quite accurate.
The rulers of the Afro-Asiatic Dominion were ethnically Nilotic peoples who controlled the major water systems from West Africa to the Indus River Valley from around 12,000 to 1500 B.C. They charged tariffs for commerce conducted on the parts of the river that they controlled. Their priests maintained shrines at sacred sites along the rivers. We see this pattern from the Niger and Benue Rivers in west Africa to the Indus and Sarawati Rivers in India. Between these are the river systems of the Nile, the Jordan and its seasonal wadis, and the Tigris and Euphrates. These rulers and their priests founded cities and shrines in all of these river valleys.
The point of origin of these Kushite ruelrs appears to be the Sudan where 4000 year old artifacts have been recovered at Hierakonpolis on the Nile. These reveal that the rulers had goods and animals from distant places such as Afghanistan and Nepal.
To facilitate discussion of the kingdom building of the Afro-Asiatic river rulers, we will divide them into two groups:  the western Afro-Asiatics and the eastern Afro-Asiatics.
The Western Afro-Asiatic Kingdom Builders
Between 12,000 and 10,000 years ago the Nile river system filled with waters from the Angolan Highlands. Before this time, the streams of the Ugandan highlands flowed west to join the Congo River, which drains into the Atlantic. Geological uplift about 12,000 years ago tilted the region to create Lake Victoria and direct its excess flow north into the White Nile. The waters of the White Nile provide most of the Nile's water during the dry season. It was after the last wet period, ending about 10,000 years ago, that settlements emerged along the Nile.

Likewise, the now dry Botswanan lake basin in southern Africa was once a sea, filled by water from the Angolan Highlands.  Thousands of stoneage tools have been found here. 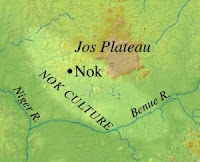 The Nok civilization spread across the Jos Plateau. The two oldest cities are Nok and Kano to the north. This civilization was bounded on the west and south by the Niger and Benue Rivers. In the last Ice Age, the Nile connected to the Niger and Chad water systems through a series of shallow lakes in the Sahara Desert. Because of this, a common plant and animal species is found in all three river systems.
Between 10,000 and 7,000 years ago Lake Chad filled its present drainage basin and spilled southwest out the Benue River to the Atlantic. It was called "Lake Megachad" and during that time it was the world's largest lake with a surface five times larger than Lake Superior.

This is the approximate time of Noah's flood in the region of Lake Chad, which is called "Bor-nu" meaning Land of Noah. (This period corresponds to the time of the Badarian culture in Upper Egypt.) The identification of Noak's Ark with Ararat in Asia Minor is a misunderstanding of the Arabic herarat - حرار - which means vehemence. Har-arat, better translated, would mean Mountain of Vehemence. Noah's ark came to rest on Mount Meni, near Lake Chad. Reference to "Armenia" is likely a misunderstanding of Har Meni, meaning Mount Meni. Mount Meni is known today as Mount Keringaya (Mount Kenya). According to David M. Westley, PhD, Director of the African Studies Library at Boston University, "From the center of the Chad Basin to Mount Meni is about 230 miles." In the time of Noah, Mega Chad would easily have extended that far.

Geological surveys have discovered that Lake Chad has flooded and dried multiple times in the last 20,000 years. When there are heavy rains the area floods quickly because the clay lake bed does not permit the water to percolate.  It is not difficult to image why the flood of Noah appeared to cover the "whole earth."


The Eastern Afro-Asiatic Kingdom Builders
The Indus civilization had several large cities, including Mohenjo-daro and Harrapa. That civilization is known by the name “Harappa” and the people of this civilization were Dravidians. [1] 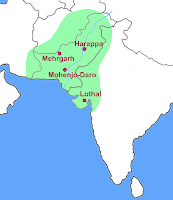 The Indian archaeologist, B. B. Lal, contends that the Dravidians came from southern Egypt and Sudan (Nubia). This would explain their dark complexion. Lal writes: "At Timos the Indian team dug up several megalithic sites of ancient Nubians which bear an uncanny resemblance to the cemeteries of early Dravidians which are found all over Western India from Kathiawar to Cape Comorin. The intriguing similarity extends from the subterranean structure found near them. Even the earthenware ring-stands used by the Dravidians and Nubians to hold pots were identical." The Nubian megaliths of which Lal speaks date from around 1000 B.C. (From here.)
The German archaeologists, Friedrichs and Muller identified some of the skulls of Mohenjo Daro as "Hamitic." The term Nilotic would probably be more accurate.

Paleontologists B.K. Chatterjee and G.D. Kumer reported in "Comparative Study and Racial Analysis of the Skeletal Remains of the Indus Valley Civilization" that the 18 Mohenjo-Daro and Harappa skulls that they examined are "similar to skulls from Nubia during the third to second Millennium B.C."[2]

The Sudra were Nilotic peoples who migrated north and east and inhabited Pakistan, southern India and Sri Lanka. The Sudra Kingdom, mentioned in the epic of Mahabharata, was one of the ancient Saraswati Valley kingdoms. Herodotus referred to the Sudra/Dravidians as the “eastern Ethiopians” and described them thus: “The Eastern Ethiopians differed in nothing from the other Ethiopians, save in their language, and the character of their hair. For the Eastern Ethiopians have straight hair, while they of Libya are more woolly-haired…” [3]

They buried their dead in wooden coffins with the heads toward the north (symbol of God’s throne and the place of judgment) and the feet toward the south (the symbol of fertility and rebirth). This distinguished the Sudra from other Indians who practiced cremation. This parallels the burial practices at ancient Hierakonpolis[4], where archeaologists have discovered a 3000 B.C. life-sized statue of a Horite priest, a 2300 B.C. golden hawk head of Horus, and a ruler's grave with a triple interment of a bull, cow and calf. [5]

It is not certain that all Dravidians venerated Horus and his Father, Osiris, as divine. In the Horite myth the two are frequently interchangeable - "I and my Father are one", as Jesus explained. (They are also all seeing, even when their eyes are dimmed by blood.) The Vedas speak of falcon-shaped fire-altars. These are associated with Horus, whose totem is the falcon. Vedic tradition teaches that "he who desires heaven is to construct a fire-altar in the form of a falcon." [6]

Kingdom Building and Missionary Priests
The oldest Dravidian traditions speak of ancient prehistoric kingdoms in southern India, extending further south into land that is now under the seas. The Sudra didn’t establish cities in the north, but their priests traveled as far as Nepal where they are called "Harwa", the ancient Egyptian word for priest. These ruler-priests are largely responsible for the diffusion of the Afro-Asiatic religious life that took root around the large water systems from west central Africa to the Indus River Valley. It is a religious life that shares eight distinctive features, all of which are found in the Bible and constitute the biblical worldview.

Legacy of the Ancient Afro-Asiatic River Civilizations
The Afro-Asiatic river civilizations built upon a social network of rulers and priests who shared a common worldview. The rulers were regarded as semi-divine beings and they exercised great power over their subjects. Their priests were responsible for the diffusion of the Afro-Asiatic worldview and cosmology across a vast expanse from modern Nigeria to Nepal. They built cities, monuments, temples, shrines and ships. They traded within their territories using the waterways to transport goods and they crossed seas to trade with others.

1. The ancient Harappan language has not been deciphered, so knowledge of this civilization is based on physical remains. No temples remain as these were at the river’s edge and were washed out centuries ago.

2. Wayne Chandler: "The Jewel in the Lotus: The Ethiopian Presence in the Indus Valley Civilization" in African Presence in Early Asia, Ivan Van Sertima et. a1. eds., 1985 p. 87

4. Hierakonpolis is the site of the most ancient (4000 B.C.) temple and city in Egypt. By 3500 BC, it was a city of many neighborhoods, industries and privates homes, extending over 3 miles along the Nile. Masks, pottery, graves and tombs with reliefs and paintings have been found there.  Priests placed invocations to Horus at the fort-summit as the first rays of the sun came over the eastern horizon. Of particular interest is the tomb painting of two men painted in red ochre with black necklaces. They carry crooked staffs with objects that look like flails, suggesting that they might be ruler-priests. The colors used in the tomb are yellow ochre for the ground, red ochre for the figures and black for the details. White, probably gypsum, and traces of green, probably malachite, were also used. Karen Milbourne, an expert in African art, says "throughout much of Africa, the primary colors are red, white and black. They don't mean the same thing to every group, but they appear over and over again."  The north-south burial and the right-left (north-south) division of paintings at Hierakonpolis suggests a binary pattern of thought.

5.  The bull, cow and calf are a trinity symbol.

6. The hierofalcon originated in Africa. "Hiero" means priest.  This species is brown with an arrowhead pattern on its belly.
Posted by Alice C. Linsley at 9:01 AM