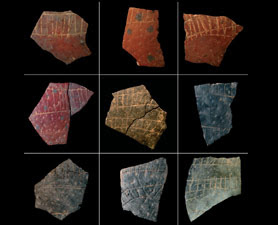 Don't laugh -- researchers say a cache of ostrich eggshells engraved with geometric designs demonstrates the existence of a symbolic communication system around 60,000 years ago among African hunter-gatherers.

The unusually large sample of 270 engraved eggshell fragments, mostly excavated over the past several years at Diepkloof Rock Shelter in South Africa, displays two standard design patterns, according to a team led by archaeologist Pierre-Jean Texier of the University of Bordeaux 1 in Talence, France.

Each pattern enjoyed its own heyday between approximately 65,000 and 55,000 years ago, the investigators report in a paper to be published this week in the Proceedings of the National Academy of Sciences.


Ostrich eggs were used in prehistoric times throughout the Nile valley as perfume containers, bowls for oblutions, and as canteens. Ostrich feathers were worn in the hair of warriors and rulers of ancient Egypt, and the Egyptian goddess Ma'at is shown with an ostrich feather in her hair. She weighed the hearts of the dead to determine who would enter eternal life.

Painted ostrich eggs have been found in tombs at Nekhen (Hierakonpolis) in Sudan. This is the oldest known site to which the Horite ruler-priests can be traced. They were devotees of Horus, son of Ra, born of Hathor-Meri who conceived when she was overshadowed by the Sun. Nekhen was a Horite shrine city dedicated to Horus whose totem was the falcon or hawk. Early dynastic Egypt adopted the Horite religion. Proto-Saharan nobles were buried with red ochre at Nekhen (4000-3500 BC).

Painted ostrich eggs clearly expressed the hope of life after death because they were place by grieving parents in the graves of children in ancient Nubia.

The ostrich represents the Winter Solstice. This explains why the ostrich is placed between the Bull (symbol of the Autumnal Equinox) and the Griffin Vulture (symbol of the Spring Equinox) in Elihu's discourse on the Transcendence of the Creator in the book of Job.


Related reading: Easter Eggs in Antiquity; Chronology of the Genesis Rulers; The Ostrich in Biblical Symbolism

The most fundamental design appears to be that of a cross or an x. Such a design on round or cylindrical objects suggests that these people were observers of the heavens and probably already knew about Earth's Great Year - the 25,000-28,000 year cycle of earth's rotation which begins and ends with the poles forming an erect cross.

This is the sort of thing St. Paul had in mind when he wrote: "...Because since the creation of the world God has made known through the creation His eternal power and divine nature, so that no one has an excuse." (Romans 1:20)