Nigerian Boundary of the Jebu-Sheba Confederation 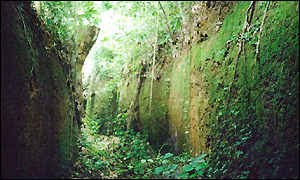 This 72-foot rampart at Eredo marked the western boundary of an ancient Jebusite kingdom.
The Jebusites ruled in Jerusalem in the time of David.


The archaeologist Patrick Darling described the Eredo site as a breathtaking find with many of its remains relatively intact, though overgrown by the rainforest.

"We are not linking what we found to a city, but to a vast kingdom boundary rampart," he told the BBC.

Eredo is a system of walls and ditches located to the south-west of the Yoruba town of Ijebu-Ode in Ogun state southwest Nigeria (6°47′13″N 3°52′30″E﻿ / ﻿6.78700°N 3.87488°E﻿ / 6.78700; 3.87488). It is reputed to be the largest single pre-colonial monument in Africa.  Local people link the Eredo monuments to Bilikisu Sungbo, another name for Sheba, according to Dr Patrick Darling, the archaeologist credited with drawing world attention to Eredo.

Dr. Darling reports that, "The vertical sided ditches go around the area for 100 miles and it is more than 1,000 years old. That makes it the earliest proof of an kingdom founded in the African rain forest."

The Jebusites had two main divisions: the Nago-Jebu and the Ketu-Jebu. Both divisions take the serpent as their totem. Ketu and Naga are two ancient words for serpent.  In ancient Egyptian literature the cosmic serpent is called RahuKetu.

Of the Ketu-Jebu there is a good deal of information in Genesis. This division resided in Palestine and Arabia. Abraham payed tribute to the Ketu-Jebu priest Melchizedek, who was the ruler of the Jebusite city of Salem (Jerusalem).  Abraham's second wife was of this division of Jebu, as evidenced by her name Ketu-rah. She resided at Beer-Sheba, which took its name from Sheba who controlled the well there. (Beer means well.)  Ketu-rah's firstborn son was Joktan, the progentior of the Joktanite clans of Arabia.  So the clans of Jebu, Sheba and Joktan are related, but what was their western boundary? It appears from historical records that it was in Nigeria at the confluence of the Niger and Benue rivers which in the time of Abraham's ancestors were very great rivers.

We might be surprised to find Jebusites in Nigeria, but this isn't surprising when we consider that Cain and Enoch are associated with Nok on the Jos Plateau of Nigeria, and Noah is associated with Bor-No, in northern Nigeria near Lake Chad. The discovery of Eredo's association with the Jebu of Nigeria suggests that this 72-foot high rampart was the western boundary of the Jebu-Sheba-Joktan confederation.

In 1892, the New York Times reported on the Jebu tribe, which controlled the water systems of the Port of Lagos. The Jebu are classified as Yoruba, but the term 'Yoruba' applied to related tribal groups only after the 18th century. The Jebu, also called Ijebu, are called Jebusites in the Bible. There are two groups: Nago-Jebu and Nago-Ketu, depending on where they reside. While there are two Jebu groups, there are three brothers: Yoruba, Egba and Ketu and these constitute a tribal unity.

In Genesis we find this two kingdoms-three brothers pattern throughout the book. One of the three brothers is often veiled in the text or peripheral to the events described. For example, Noah had three sons and the lines of Ham and Shem intermarried, but we know very little about the line of Japheth. Likewise, Abraham had three first-born sons: Joktan, Ishmael and Isaac, and we have to dig into the text for information on Joktan, from whom come the Joktanite clans of southern Arabia.

Consistent with the pattern of rulers among Abraham's people, a Jebu ruler-apparent ascended to the throne after he married a second wife. This explains Abraham's urgency to fetch a cousin bride for Isaac before his death. Following the marriage pattern of the rulers of his people, Isaac already would have had a half-sister wife in Beersheba.

According to the New York Times report, the king of the Jebu levied taxes on all products carried through his territory. This is consistent with the biblical information concerning Abraham’s ruler-priest ancestors who controlled water systems in throughout the ancient Afro-Asiatic Dominion.

The link to the royal name Sheba also fascinates me. This name appears more than once in the ancestry of Abraham, David and Jesus. (See diagram below.)

Joktan  married a daughter of Sheba, and though the rulers settled in geographically separate regions, their kinship pattern remained unchanged. The lines of Eber and Sheba continued to intermarry, which means that cousin wives were chosen from ruling kin who lived in other territories. We find this with Isaac who resided in Beersheba but married his patrilineal cousin Rebecca who lived in Mesopotamia.

Descending from Sheba the Younger in chronological order according to Genesis 10 and 25 are:
Reu
Serug
Na’Hor
Terah
Abraham
Joktan, Abraham’s son by Ketu-rah, his cousin bride.

Ketu-rah named her first-born son after her father Joktan, according to the cousin bride’s naming prerogative. This means that there were at least two Shebas and at least two Joktans between the generations of Noah and Isaac. (There are also at least two men named Esau. There are at least two Korahs as well. One was Moses' half-brother and the other was Amram's father-in-law.)


The pattern of intermarriage between Sheba's people and Joktan's people parallels the pattern of intermarriage between the lines of Cain and Seth and the lines of Ham and Shem. So the time of division associated with Peleg (Joktan's brother) began about 5 generations before Abraham, but can only be understood as geographical separation, not social separation.

Though the clans of Joktan, Sheba and Jebu became became geographically separated from some of their fellow clans in the time of Peleg, their rulers continued to intermarry according to a long-standing pattern. This pattern is characterized by two wives. The first wife was a half-sister (as was Sarah to Abraham) and the second wife, married much later, was a patrilineal cousin or niece (as was Ketu-rah to Abraham). The firstborn son of the sister wife ascended to the trone of his father.  The firstborn son of the cousin/niece wife ascended to the throne of his maternal grandfather, after whom he was named.  So Isaac ruled over Abraham's territory by Joktan ruled over the territory of Joktan the Elder, Ketu-rah's father. The two lines continued to intermarry according to a pattern that is traceable, using the Biblical genealogies, to Jesus Christ. It is also a kinship pattern that has been identified with the Kushites.

This suggests a very high importance to the preservation of the bloodline of these rulers. It is likely that they believed themselves to be heirs of God's promise that the Son of God would come through their lines.
This suggests that the ruling lines believed the promise made in Eden (Gen. 3:15) concerning the Woman's Seed who would crush the serpent's head, deliver from death and receive the Father's Kingdom. This line is traced through Jesse and David, but because of the exclusive intermarriage (endogamy) of the clans, it is also traced through Sheba and Joktan. This explains why Sheba opposed David's claim to the throne in Israel and considered himself the rightful heir. Sheba lost his life when the Wise Woman of Abel Beth Maccah had him beheaded in order to save the town from being destroyed by Joab (II Sam. 20).

Related reading:  The Jebusites Unveiled; Afro-Asiatic Metal Workers; The Afro-Asiatic Dominion; The Pyramids of Bosnia; Extant Biblical Peoples and Clans; The Jerusalem that David Knew
Posted by Alice C. Linsley at 2:30 AM

In the Nordic language, Kethura means Kattu. The sons of Kethura went to India as Indoarians.
Because Abraham send they to the east. 1 mose 25,5.
Shepa in Nordic means Suebus, he lived on MONTE Suebo in the Caucasus. The Indoarians of Kethura's sons were driven from India 1750bC to the Baltic Sea by the Assyrians. There they founded the kingdom of the Dedanites. They founded the city of Gdansk = DANzig and ruled Denmark and southern Sweden. Later they made Dedan to their god Odin = Wodan. These descendants of Dedan and Shepa were later driven south to the Danube and are today the Swabians of Germany. Asshurim went to Anatolia they became the Hattu of the Hittitis. They later went to Germany as the Chattu = Hessians.