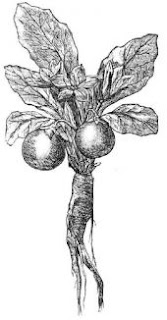 According to the Doctrine of Signatures or Similitudes “like cures like”  so that the physical appearance of a stone or a plant was perceived by archaic man to indicate the uses of the stone or plant. An orphic poem contains allusions to the virtues of gem-stones. The blood-red color of a jasper suggested the stone's use in treating haemorrhage; a green jasper brought fertility to the soil; and the purple wine-colour of amethyst pointed to its use in preventing intoxication. (Both animals and gemstones served as totems for clans and tribes. This is the significance of the 12 gemstones on the priestly breastplate of Aaron.)

The Mandrake plant (shown right), with parts resembling male and female organs, was believed to stimulate fertility. This is why both Rachel and Leah desired it in their baby-making competition.

The Mandrake usually grows as a weed in wheat fields. Reuben found the plants at the time of harvest and brought them to his mother Leah (Gen. 30:14).  Anxious to conceive, Rachel bargained with Leah, saying that Jacob would sleep with Leah in exchange for the plants.

The Mandrake consists of several large dark green leaves that lie flat upon the ground forming a rosette. In winter, a cluster of purple flowers appears in the center of this rosette. The root of the mandrake can be several feet long and weigh several pounds. The ovary or testicle-shaped fruits, mentioned in Song of Songs, are produced in the early summer and have a pleasant fragrance like ripe cantaloupe.  The fruits are green when they first appear and turn a deep gold color when mature. 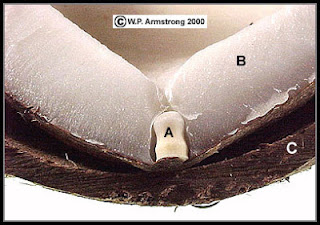 A traditional cure for female sterility was to place a date from the date palm (tamar) in the vagina of the barren women. The date nut exterior husk (shown above) resembles the vagina and the womb. From Pre-Dynastic times the tamar was associated with females and was a symbol of fertility. Deborah judged from her tamar between Bethel and Ramah.

How fair and how pleasant art thou, O love, for delights!
This thy stature is like to a palm tree, and thy breasts to clusters of grapes.
I said, I will go up to the palm tree, I will take hold of the boughs thereof...

The Doctrine of Signatures exerted considerable influence in Europe until late in the 17th century, but the idea is found much earlier in Africa and was developed by ancient Greek herbalists. Jakob Böhme (1575–1624) claimed to have had a mystical vision in which he saw the relationship between God and man signaled in all created things. In 1621, he wrote Signatura Rerum (The Signature of All Things) in which he applied the doctrine to the medicinal uses suggested by the form of plants.