Rachel had the misfortune of having a father who few people trusted. Even Leah, Laban's other daughter, didn't trust him.  When Jacob proposed a plan to escape from servitude to Laban, his two wives were quick to support him, saying: "Are we still likely to inherit anything form our father's estate?  Does he not think of us as outsiders now? For not only has he sold us, but he has completely swallowed up the money he got for us." (Gen. 31:14,15, NJB)

As Rachel and Leah were Jacob's cousin brides, one of them should have named their first born son after Laban.  The fact that neither did this suggests the possibility that neither son was in line to inherit Laban's territory. It is also possible that they declined their prerogative of naming their first-born sons after their father because by doing so they designated the sons as Laban's possession.[1]

Jacob and his wives were aware that Laban didn't plan to honor any agreements that might strengthen Jacob's position as a ruler.  Laban had other sons and they were jealous of Jacob's successes. These sons were saying, "Jacob has taken everything that belonging to our father; it is at our father's expense that he has acquired all this wealth." (31:1, NJB)  Rachel and Leah's brothers were watching for the right moment to deal with Jacob, for Jacob had to make plans with his wives out in the fields where he kept his flocks (31:4).  That way they wouldn't be overheard.

The plan involved leaving Paddan-Aram while Laban was away shearing sheep. Laban formed a war party with his brothers and went after Jacob.  When he located him, Laban pitched his tents on Mount Gilead from which he has a view of Jacob's tents on the hills below.  Laban was extremely angry because he felt that Jacob had stolen his daughters and the ancestor figurines which he had inherited from Terah, called Teraphim.  His thoughts were murderous, but the Lord cautioned Laban in a dream not to cause trouble with Jacob (31:24). For all his faults, Laban apparently feared God enough to seek a non-violent resolution.

According to Hurrian records, ancestor figurines [2] were passed to the son who would be heir to the father's territory. Laban intended that the Teraphim would go to one of his first-born sons. [3]  Jacob would never rule over Laban's territory, but there was still the threat of Leah's first-born who was named for the great Afro-Asiatic ruler Reu, son of Peleg in whose time the tribes became geographically separated.  At some point after Peleg, the Arameans became jealous of their control in the north while their brother Horites controlled the southern territories. The time of division began about 5 generations before Abraham, and involved a geographical separation, not a change in the marriage pattern of these ruling houses.
By taking the ancestor figurines, Rachel hoped to gain legal leverage for her first-born son in the southern territories. Rachel's first-born son was Joseph. Might this have given Joseph's brothers greater motivation to get rid of him?

This explains why Jacob named Rachel's second son Ben-Jamin, which means "son of the south." It was in the south, in Judah, that the promise of Genesis 3:15 would be fulfilled [4]. See diagram below. 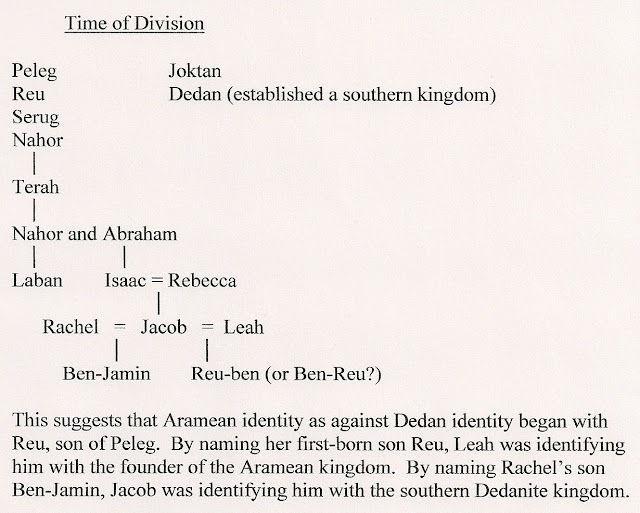 This also explains why, according to Judges 1:21, the men of Benjamin did not force out the Jebusites who lived in Jerusalem.  The Jebusites and the Dedanites were southern kin to Benjamin.

1. The famed Cultural Anthropologist Claude Levi-Stauss observed in 1949 that mother and son do not belong to the same clan in a patrilineal system of descent. The bride belongs to the house of her husband, but the first-born son of the couin or niece bride belongs to the house of the bride's father.  Example from the Genesis 4 and 5 King Lists: While Lamech's daughter belonged to the house of her husband, Methuselah, her first-born son belonged to her father's house. That was indicated by naming the son Lamech after his maternal grandfather.

2. The ancient Sao culture of Chad and Cameroon produced elaborate human figure sculptures, representing deified ancestors. Carbon-14 dates for the Sao figurines range from the 5th century BC to the 18th century AD. The Sao are the ancestors of the Sara who make up to 30% of Chad's population. About a sixth of them are Christians.  The Sara (meaning to laugh) have a 3-tribe confederation like that of Abraham's African ancestors.

4. Gen. 3:15 is the first divine promise made in the Bible. It involves the promise made to "the Woman' that she would bring forth a Son who would crush the head of the Serpent.
Posted by Alice C. Linsley at 4:20 AM

Horite ruler-priests like Jacob were oriented toward the rising Sun. When one faces East the right hand is on the south side. So, you see, it has both meanings! Thanks for your good comment.

Would it have anything to do with Laban meaning wickedness, or possibly meaning an albino?