A friend has observed that "Christianity does not have true dualism, because it is actually binary, a distinction which tends to become obscured. At the same time we tend to shun the inequality of the binary sets. The superior-inferior element in binary sets aligns with conquest and domination... implies to most people standards of better and worse, so the woman as inferior means she is not as good or worthy as the man. How do we transcend this and yet retain the order of binary sets in the mind of the Church--the mind of Christ? In what key ways does the life of the Church rest on binary sets?" -- Norman Coppola

The superior entity empties itself of power to serve the lesser. This is what St. Paul addresses in the relationship of husband and wife. The Apostle tells us that this earthly pattern speaks of the mystery of Christ and the Church. Jesus Christ emptied Himself (kenosis) to become a Man, and as a Man to serve the weak, redeem those in bondage to sin, and restore the lost. This would not speak with such power had He become a Woman.

We see this also in the Incarnation of Jesus Christ by the Virgin Mary. She regarded herself as a very lowly vessel and marveled that the Almighty should ask her permission to bear the Son of God. This is what makes the Magnificat in Luke's Gospel so theologically rich. Here is an expression of number 2, the least, being served by number 1 the greatest.

In saying "Yes" to God, the Virgin Mary risked her very being. This hidden part is known only where there is trust sufficient to know and be known. This is Martin Buber's I-Thou insight. Buber argued that when we take an objective view of another person, a part of us is hidden from the experience; the relating does not take place between the observer and the observed. In an I-thou encounter the whole of one's being is involved and risked. This is not a natural response, given how dangerous the world can be and how easily even good friends can betray confidences.

Yet the equation changes when the Other is God, who is superior in every way and who knows us. It is God's condescension that makes risk possible.

God is Always Number One in Biblical Symbolism

In the Biblical worldview God is always number 1 even though I assume that I am number 1 and my ego needs support that view. Only when I empty myself (kenosis) of my ego needs and accept the reality of God's absolute superiority can I begin to recognize my true value.

The 1-2 binary sequence is dynamic in this sense.  It is kenotic by nature.  The 1-2 sequence is the basis for individual identity and interpersonal relations. This is a base-2 symbolism that is without zero. Positional use of zero dates from later centuries. Likely what is viewed as the integer zero in the older binary system of 1-2 is instead a pictogram of the Sun or a symbol of the natural cycles observed by primitive man, especially the lunar and solar cycles.

This 1(self)-2 (other) is what Martin Buber identified as the I-thou construct. For Buber, God is the Eternal Thou, since the individual must relate to God as fully Other. I am therefore number one and God as Thou would be number two. There can be a reversal, of course, when I surrender my number oneness to God. Then I become number two and God takes the rightful place of the Creator as number one.

Where fear exists in a relationship, number oneness is less likely to be surrendered, especially by males.  In her seminal book, In a Different Voice, Carol Giligan (Harvard Professor of Psychology) talks about the effect of fear in women.  Because women fear loss of relationship and intimacy more than they fear loss of rights or territory, they sacrifice their rights more readily than men who more often fear loss of rights and personal territory. This is what is described in Genesis 3:16 where the Creator explains to the woman, "thy desire [Hebrew tesuqah] shall be to thy husband and he shall rule over thee." This is not so much a curse as a description of male-female interaction when fear enters the equation. Note that fear is the first human emotion expressed after the fall (Gen. 3:10). Because the woman now fears loss of intimacy she will desire her husband, that is, desire intimacy with him. This fits the context of Genesis 3:16 and it aligns with the use of tesuqah in Song 7:10 where is indicates sexual longing, which for women is often a yearning for intimacy more than pleasure.

To consider this from another angle, in and of myself I am not essential for the survival of the species. In the grand scheme of existence, I am simply not that important. However, my desire/will to survive makes me aspire to be number one. If the survival of the other is more important to me, I may sacrifice my number oneness. This is the meaning of the Greek word kenosis (κένωσις)- to empty oneself of oneness. It is a divine action, embodied in Jesus Christ, "who, being in the form of God, thought it not robbery to be equal with God: But emptied himself, and took upon him the form of a servant, and was made in the likeness of men: And being found in fashion as a man, he humbled himself, and became obedient unto death, even the death of the cross." (Philipians 2:6-8) To understand the radical nature of this message we must explore the association of the number one with Maleness, with the Sun, with the Heavens, and with the Creator.

The number one is the referent from which 2 and all subsequent numbers (added later) derive meaning. It is likely that this binary structure is the framework for the oldest worldview.


Jesus' kenotic act was to join himself fully to the human creature - the other - by surrendering His oneness, the oneness of God. In the biblical worldview, the Creator is always number one and the Referent by which all other entities derive meaning. Is it any wonder that those who excise the divine Referent from their lives become nihilists? 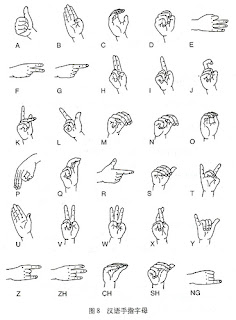 In what is probably the oldest known system of symbolic communication 1 and 2 would apply to fixed observable entities that are binary opposites, allowing for mutual understanding. This is suggested by comparison of the spelling sign language systems for the deaf used worldwide.  In the Chinese spelling system (left), the first letter (corresponding to the first letter of the Chinese alphabet) positions the fingers closed and the thumb upward and the second letter (corresponding to the second letter) has the fingers upward and the thumb closed, the exact opposite. Here we have an example of the A-B or 1-2 binary sequence. These are the same first two signs in the Canadian and American sign language systems. Regardless of the alphabet, the first two letters are opposites. They represent the most fundamental sequence and the most fundamental relationship of I-Thou. (I haven't studied other spelling sign language systems, but I suspect this holds true for most.)
In various sign languages for the deaf, the index finger represents a person almost universally.  In Japanese signing, two index fingers held up with the palms facing represent two people facing each other.  Slowing bending the fingers toward each other makes the sign of two persons bowing to each other in the typical Japenese greeting. These examples are given to show that there is a universal logic to the first and second positions in the various sign languages for the deaf. The universal application of the binary sequence, whether it be letters (A-B) or numbers (1-2), suggests an inherent logic common to all human communications.

The greatest love is shown when A submits to B or when 1 bows to 2. Whether that love is reciprocated matters not.  What matters is the willingness to regard the other as greater than oneself.  What a profoundly difficult task!  It goes against every message that the world declares and it goes against the instinct of the individual ego. Our Lord Jesus showed the full extent [eis telos] of his love when He stooped to wash the disciples' feet. To show the full extent of divine love, we too must risk emptying ourselves.

Each year the djed pillar (date palm)forms a new ring of growth by the sacrifice of fronds. These fronds are young lulav when waved through the air on Succoth. They are only kosher before they begin "twinning" or separating into distinct leaflets. Lulav are the ideal symbol of both binary mind and kenosis.
Susan B.

Susan, that is beautiful!

This might interest you. Among the Nigerian Ijebu (biblical Jebusites) palm fronds are used at the coronation of the ruler. This gives new meaning to Palm Sunday!