Sodom's Death and the Birth of Sons

Sodom was a large city of the Plain well south of Mamre where Abraham pitched his tent between Ai (on the west) and Bethel (on the east).  Here in the heat of the day, Abraham was visited by the Three Person God (Baal Shalisha) who spoke to Abraham of the impending judgment of Sodom. The Septuagint adds Gomorrah to the narrative, but in the Masoretic Text, the focus is on Sodom because this is where Lot resided. Lot was Abraham's nephew, the son of Abraham's brother Haran.

The destruction of the city is described to Abraham in Genesis 18 and the city's is remembered by this description, which in Arabic is sdm, meaning "One who causes a collision with bad results".  Very likely the true name of the city has been lost. However, there is no reason to doubt that a major city existed in the area described. Canaan had many ancient shrine cities in the time of the Partiarchs. Some of these, such a Hazor, were overthrow in the time of Joshua.

This structure suggests that the narrative may originally have been from Lot's point of view rather than from Abraham's. Here Lot's two sons become the fathers of nations just as Abraham's son Isaac will become  the father of a nation. The theme of two sons for Lot and one son for Abraham seems to point to a tradition associated with Lot.

The suggestion that Lot's sons were the product of incest is likely a later addition to the text, intended to disgrace the Ammonite and Moabites. Or it may be that this carefully worded narrative is intended to deflect the drunken patriarch's sexual misbehavior upon his daughters. Genesis 19:8 says that Lot offered his daughters who "have never slept with a man" to the Sodomites. These were chaste young women. Sexually inexperienced.  It seems unlikely that they would have initiated sex with their father. This is not the first time that the drunken behavior of the father leads to a bad name for his children. We remember how Noah awoke from a drunken stupor and cursed Canaan (who wasn't born yet).  He did not curse his son Ham because Ham would become a ruler after Noah and the lines of Ham and Shem would intermarry.

Noah was angry because his son Ham had looked upon his nakedness. Jacob was angry because his son Reuben slept with his concubine. This "exposed" the father's nakedness.  Noah’s curse falls on Canaan, Ham’s son, which is a deflection of guilt. Jacob’s blessing of Joseph's sons places the youngest above the first-born. The excuse given for Jacob’s behavior is that he was blind. The excuse given for Noah’s behavior is that he was drunk.

The curse of Canaan parallels the curse of Cain (Gen. 4:11). Cain’s curse involves his being expelled from his homeland. The curse of Canaan is intended to justify Israel’s driving out of the inhabitants of principal cities of the Canaanites. Many of these cities were shrine centers with Horite ruler-priests, also known as Ha-biru (Hebrew). Some of the Hebrew rulers married Canaanite woman who were also of the Horite ruler caste. This appears to be the case with Salmon, of the tribe of Judah, who married Rahab.

The chiastic structure place the destruction of the Sodomites between the promise of a son for Abraham and the birth of two sons to Lot.  Three sons represent a tribal confederation in Genesis, so the destruction of the cities of the Dead Sea Plain made way for these Horites to populate the area, which they did. Mount Harun was sacred to the Horites. (Har and Hur are related to the words Horim and Horite.) 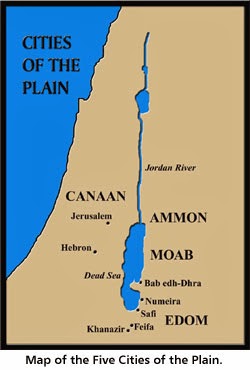 The Cities of the Plain

The kingdoms of Moab and Ammon were in what is now central Jordan. Although not confirmed, the site of Sodom may be what remains of the ancient walled town of Numeira which was consumed by fire around 2350 BC. The town of Zoar, to which Lot fled, is south of Numeira.

Excavations over two seasons at Numeira uncovered the foundations of homes and the remains of a winery. Deuteronomy 32:32 refers to the vineyards of Sodom, "For their vine is of the vine of Sodom and of the fields of Gomorrah; their grapes are grapes of gall, their clusters are bitter."

The cities of the plain had relatively large populations, as evidenced by the cemeteries found there.  The cemeteries of Numeria and Khanazir have not been located. The Early Bronze Age burial grounds at Safi and Feifa are as large as those found at Bab edh-Dhra which contains 500,000 bodies, some in shaft tombs dating to 3200 B.C. The number of burials in this area of the Dead Sea is greater than 1,500,000 bodies, indicating that this was a heavily populated area in the time of the Patriarchs.

Alice,
What should we be able to surmise about a relationship that may be indicated between this seemingly obscure Salmon, who you are mentioning here as a Judahite who married a Canaanite (and who is associated with Bethlehem (I Chronicles 2:51)), and that other, more famous future king Salmon/Solomon, who was the son of David by Bathsheba (called Bathshua in I Chronicles 3:5)? In that, the original Judah made his first marriage with a certain Canaanite woman named Shua ("a cry" or "an oath")(Gen. 38: 2, 12), can we conclude that there was something invested between the people of Judah and the people of his wife Shua, that persisted up to the time of David? In other words, that the Bathsheba/Bathshua who we are usually used to thinking of in a besmirched way, was a Canaanite of prominent pedigree, and more so, the "daughter (bath) of an oath (shua)"? That her meeting with David was not entirely random, but was somehow prefigured? Did Bathshua exercise a "naming prerogative" of some sort in naming her son Solomon? Why didn't she name him after her father Ammiel (I Chron. 3:5), aka Eliam (2 Sam. 23:34 "God-nation")?

Canaan was filled with peoples who were kin to Abraham and David. The people of Sheba were one such group. The daughter of Sheba (Bathsheba) was certainly a woman of high rank, as was Keturah, Abraham's cousin wife who was of Sheba's clan also. That's why she resided at Beersheba (well of Sheba). You can read about Sheba the Elder and Sheba the Younger here: http://jandyongenesis.blogspot.com/2009/03/sheba-lines-of-ham-and-shem.html

Abraham's Horite people appear to have been a confederation of numerous clans including the House of Sheba and the House of Joktan. Joktan was the name of Abraham's first-born son by Keturah. Sheba was such a prominent clan that a contemporary of David sought the throne. For this Sheba lost his life at the city of Abel Beth Macah (2 Samuel 20) where he escaped after leading a revolt against David. This may shed some light on the nature of the oath.

Bathsheba may have been a distant cousin to David. Naming her son Solomon or Salmon connects him with the Salmon who married Rahab. Both Salmon and Rahab were important people and are listed as ancestors of Christ our God.

Another important group were the Dedanites. You might be interested in their connection. Read more here: http://jandyongenesis.blogspot.com/2010/06/horite-confederation-of-uz-buz-and-huz.html

The slur against all Canaanites comes later than the Genesis material. It is part of the post-exilic preoccupation with racial purity, but Jewish racial purity is a myth. See this:
http://jandyongenesis.blogspot.com/2010/06/jewish-myth-of-racial-purity.html

Jonathan, this may interest you also:
http://biblicalanthropology.blogspot.com/2010/09/who-were-hapiru.html