The first painted eggs were ostrich eggs. The painted ostrich egg in the photo above was found on Cyprus. Habiru/Hebrew priests were living there from great antiquity. Barnabas (Joses) was a Levite and a native of Cyprus according to Acts 4:36.

Painted eggs represented the hope of eternal life or immortality. This is evident from archaeological finds throughout Africa. Painted or incised ostrich eggs have been found in El-Badari and ancient Kush (Nubia). In the Oriental Museum there are examples of ostrich eggs which have been decorated over their entire surfaces. At Naqada, a decorated ostrich egg replaced the owner's missing head. This egg is now in the Ashmolean Museum in Oxford.

Ostrich eggs, which are as hard as earthenware when dry, were used in prehistoric times throughout the Nile valley as perfume containers, ablution bowls, and as canteens. Ostrich feathers were worn in the hair of warriors and rulers of ancient Egypt, and the Egyptian goddess Ma'at is shown with an ostrich feather in her hair. Using this feather, she weighed the hearts of the dead to determine who would enter eternal life and who would experience the second death (Rev. 2:11, 20:14). 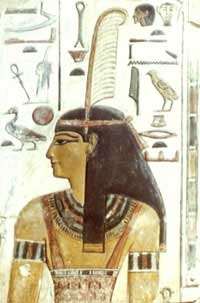 Painted ostrich eggs have been found in tombs at Hierakonpolis (Nekhen), the oldest known site of Horite Hebrew worship. They also have been found in many graves of children in ancient Nubia (Kush). The oldest find of decorated ostrich eggshells includes 270 engraved shell fragments, excavated in the area of Diepkloof Rock Shelter in South Africa. These are between 65,000 and 55,000 years old.

Ostrich eggs were traded by Abraham's Kushite ancestors, some of whom were rulers in Kerma, between the third and fourth cataracts on the Upper Nile. These rulers, such as Nimrod (son of Kush), established trade routes that connected the interior of Africa to Egypt, Arabia, Syria, India, and Mediterranean islands such as Cyprus. They traded exotic hardwoods, animals and their skins, ivory, ostrich eggs and ostrich feathers. "Through the wealth built up by this exchange of goods, the Nubians of Kerma became exceedingly rich....." (The Nubians by R.S. Bianchi) 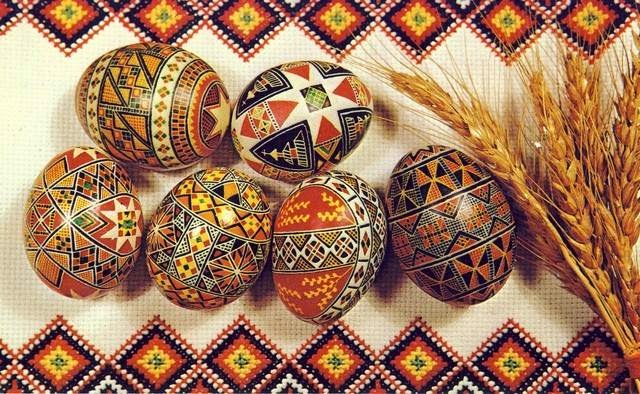 Archaeologists have found painted ostrich eggs in the graves of children. These appear to symbolize the hope of life after death. In the Eastern Orthodox churches delicately patterned eggs are a central part of the celebration of the Pascha. For Christians, the Easter egg is a reminder that Jesus rose from the grave, and that those who believe in Him will share in His eternal life.

Such an odd thing that people thought to adorn eggs. And that it caught on and was owned by other cultures (particularly the Ukrainians).

Among the various Ainu diaspora, are their cultural oddities (like our Easter eggs) that are shared? I know about the head-dress for the elders, but I am curious if there are other things.

The oldest (known) ostrich eggs were scratched in a ZigZag or crosshatched pattern.

Similar patterns are found on an ~70ka ochre bar from South Africa, and on a 420ka clamshell from Indonesia.

My guess is that this was done to improve surface tactility, the ability to carry water distances would depend on not dropping the container while on rough ground.

I don't think leather "wineskin" bags and portable well folding buckets of leather were engraved originally since they were strung, but... One might see a pattern of both water ownership and ancient enscription developing in parallel simply as a result of identifiable individualized scratches on the containers.

Jay, Ostrich eggs were used as vessels, and these were decorated, just as people later decorated ceramic bowls.