Life is in the Blood

One of the fascinating discoveries of cultural anthropologists involves the extremely ancient and universal practice of burying people (especially rulers) in red ochre dust, a symbol of blood. Red ochre or hematite (from the Greek word for blood, haema ) is found naturally around the globe. When hematite powder is mixed with water is looks just like blood.

The oldest site of red ochre mining is in the Lebombo Mountains of southern Africa. Here H.B.S. Cooke’s team discovered the oldest known human burial, between 70,000 and 80,000 years old. The grave is that of a small boy, buried with a seashell pendant and covered in red ochre. This is also the location of the oldest known mining operations in which thousands of mining tools have been found in excavated tunnels. Here hematite was mined 80,000 years ago.

The use of red ochre in burial was widespread in prehistoric times. A man buried 45,000 years ago at La Chapelle-aux-Saints in southern France, was packed in red ochre. “The Red Lady" of Paviland in Wales was buried in red ochre about 29,000 years ago. The “lady” was actually a man whose skeletal remains and burial artifacts are encrusted with the red ore.

The ‘Fox Lady’ of Doini Vestonice, Czechoslovakia, who was buried 23,000 years ago, was also covered in red ochre. There is also the 20,000 year old burial site in Bavaria of a thirty-year-old man entirely surrounded by a pile of mammoth tusks and nearly submerged in red ochre. Natives peoples of the Americas also used red ochre to bury their dead.

Red ochre has been found adhering to bones or as scattered layers covering skeletons at Körtik Tepe, ’Ain Ghazal, and Jericho. There is evidence of widespread use of ochre in burials throughout the Pre-Pottery Neolithic Period in Anatolia and the Levant. At Göbekli Tepe, ochre traces were detected on fragments of skull 1. The placement of this most complete skull, found in a concentration of ochre, indicates the special significance of this object, likely associated with the veneration of an important ancestor.
P.L. Kirk reports that prehistoric Australian aboriginal burials reveal pink staining of the soil around the skeleton, indicating that red ochre had been sprinkled over the body. The remains of an adult male found at Lake Mungo in southeastern Australia were copiously sprinkled with red ochre.

In the ancient world, blood was suspected of having supernatural powers.  The blood of sacrificed animals could pay for certain human crimes, but for other crimes only the blood of the offending party would suffice.  The blood of humans was more powerful than the blood of animals because it was perceived to come from the Creator directly through the mother. For example, the Ashanti of Ghana believe that an individual's blood is derived from the earth and passed through that individual's mother.  In this scheme, human blood has the power to speak to its Source or Origin, blood speaking to blood. This notion is reflected in the story of Cain and Abel.

When Cain kills his brother and God asks him about it, Cain replies with a question that poses a theme of the entire Bible. Cain asks, “Am I my brother’s keeper?” The answer is not obvious, though it is natural that brothers should care for one another. However, there is much more to this story. The blood of the murdered brother cries to God from the ground where it spilled (Gen. 4:10). The blood of the murdered has a voice! There is life in the blood of the innocent one. Abel is the archetype of the Son of God who was killed by his own brethren.

There is still more to the story. Cain was the first-born son. He killed his younger brother, the very person he should have tried to protect. In this, Cain’s jealousy of his younger brother overturns his natural affection. Likewise, the jealousy of Joseph’s older brothers overturned their affection and they sold him into slavery. Neither was David, the youngest of the 12 sons of Jesse, treated well by his brothers. They left him to tend the flock while they returned home to feast with the Prophet Samuel. We have an allusion to this in the Song of Songs (1:5,6), which says that beloved’s skin is as dark "as the tents of Kedar" because he was made to work in the sun by his older brothers. 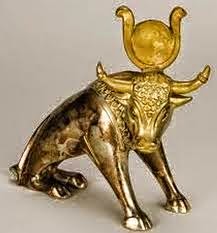 The calf is suggestive of Horus as a child. Horus' anthropomorphic form is either as a adult male or more usually as a boy wearing the sidelock typical of royal Egyptian youth. Horus as a boy is often shown on cippi dominating crocodiles and serpents. Consider this in light of the Woman, the Child, and the Dragon in Revelation 12. Consider also the red heifer of Numbers 19 that stands as a perpetual symbol of Israel's need for cleansing. The cow is sacrificed and burned outside the camp and the ashes used for "water of lustration." (Num. 19:9)

The creation of the Golden Calf was criticized by the Deuteronomist, but the image was not a new one to the Horites whose ancestors were cattle-herding Nilo-Saharans.  Korah, Moses’ other brother, challenged Moses’ authority in the wilderness. According to the Horite pattern of ascendancy, Korah, as a first born son of Amram by his cousin wife, had higher authority than Moses. However, Moses was the sent-away son to whom God would deliver authority to rule. Korah died when the earth opened and devoured him (Numbers 26:10).

The theme of the beloved younger brother being abused by his older brothers runs through the entire Bible and speaks of the only begotten Son of God. His Blood gives life to the world and His blood makes it possible for our hearts to speak to Him. This sheds light on these words of Jesus: