The ruler-priests among Abraham's people had two wives who lived in separate settlements with separate flocks. Together these constituted the extent of the ruler's kingdom. There were practical reasons for this practice. In the event of attack, the ruler's line was more likely to survive if divided into two camps. This very fear of being "cut off from the earth" motivated Jacob to divide his household into two groups when returning to Canaan (Gen. 32). 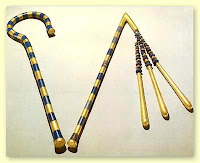 Horus, who was called "son" of the Creator, was believed to be the uniter of two lands (the Upper and Lower Nile). In ancient Egyptian he is called HR, meaning Most High One. One of his titles was Har-pa-Neb-Taui, which means "Horus of the Two Lands." He was regarded as the patron of kings and the Great Shepherd.
The early Hebrew were shepherd priests. The signs of their authority were the shepherd's crook and the flail or the staff (matteh) and the rod (shebet).  Many of these rulers bore a Horus name because they believed that their king was divinely appointed to enforce divine law as an earthly representative of Horus. Great care was taken in the preparation of the dead king's body in hope that he might be the righteous ruler who would overcome death and lead his people to immortality.

The rulers of Egypt kept flocks and acknowledged that Jacob's people were especially skilled shepherds. This is why Pharaoh asked Joseph to put the best shepherd of Jacob's clan in charge of the royal flocks (Gen. 47:6). Moses' father married according to the pattern of the early Hebrew ruler-priests. He too was a shepherd priest. One of Amram's daughters grew up around her father's water shrine and she married a Hur, a Horite Hebrew ruler. Hur is a Horus name.

Jesus said, "I am the door; if anyone enters through Me, he will be saved, and will go in and out and find pasture. The thief comes only to steal and kill and destroy; I came that they may have life, and have it abundantly. I am the good shepherd; the good shepherd lays down His life for the sheep. He who is a hired hand, and not a shepherd, who is not the owner of the sheep, sees the wolf coming, and leaves the sheep and flees, and the wolf snatches them and scatters them. The man runs away because he is a hired hand and cares nothing for the sheep. I am the good shepherd; I know my sheep and my sheep know me-- even as the Father knows Me and I know the Father; and I lay down My life for the sheep."

Joachim, the Virgin Mary's father, was a shepherd-priest. Even those who rejected Jesus as Messiah recognized that Mary was the daughter of a ruler-priest. In the Talmud we read: “She who was the descendant of princes and governors played the harlot with carpenters.” (Sanhedrin 106a)

Jesus, the Good Shepherd, speaks of having other sheep in another fold (John 10:16). The two folds are often cast as dispensations: one consisting of those who lived in expectation of the Son of God (Abraham's people) and the other being the witnesses of His resurrection (the Church). Together these comprise the Kingdom of God.

Jesus, born in Bethlehem of David, comes from a long line of shepherd-priests. Mary’s father Joachim was a priest, and the Protoevangelium of James says that he kept flocks. The priests of old maintained shrines at water systems or wells where they watered their flocks. Moses tended the flocks of his father-in-law, Jethro, the priest of Midian. It was at Jethro's well that Moses first met his future wife, Zipporah. Abraham's servant found Rebecca at a well and Jacob first encountered Rachel at a well. Jesus encounters the first convert, a Samaritan woman known as Photini, at Jacob's well.

The association of sheep with the Son of God is found throughout the Bible and takes the Horite shepherd-priests as its pattern. In Scripture, God is depicted as the Shepherd of Israel (ex: Psalm 80:1) and the priests of Israel are commanded to be good shepherds of the flock.


The ruler-priests among Abraham's ancestors were shepherds. The signs of their authority have been found in pre-dynastic wall paintings at Hierakonpolis, the site of the oldest known Horite religious practices (4200 B.C.). Priests placed invocations to Horus at the summit as the first rays of the sun came over the eastern horizon. Of particular interest is the tomb painting of two men who carry crooked staffs with objects that look like flails, suggesting that they might have been ruler-priests. Their bodies are painted with red ochre, an almost universal practice among holy men before the Axial Age.

It was to the shepherds of Bethlehem, a Horite Hebrew settlement (I Chronicles 4:4; 1 Chronicles 2:54), that God sent the first message of the fulfillment of the promise made to their ancestors in Eden (Gen. 3:15). In God's economy, which always gets the order of things right, the descendants of the people who first tasted paradise are the first to hear the news of deliverance and restoration.


Related reading: The Hebrew Were a Caste; Sheep Cotes as Sacred Spaces; Ancient Moral Codes; Jesus: From Lamb to Ram; Threshing Floors and Solar Symbols; The Two Brides of Christ; The Pattern of Two Wives; Horite and Sethite Mounds