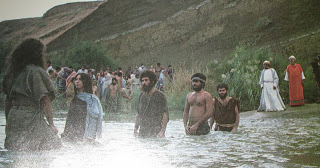 
Before Alexander the Great there was Nimrod the Great! That's what Genesis tells us. Nimrod, the son of Kush, is mentioned in 1 Chronicles 1:10, Micah 5:5 and Genesis 10:8-12 where he is portrayed as "a mighty hunter before the Lord." The term "mighty hunter" is related to the Hausa term for lead hunter - sarkin maharba.  Sar means king in Sumerian.

Nimrod's brother was Ramah who assumed rule over his father's territory in Arabia (the area of Dedan-Ramah). Nimrod left Kush's territory for the Tigris-Euphrates River Valley where he established his kingdom and built cities along the great rivers. The ruling lines of Ramah and Nimrod continued to intermarry, following the pattern of the Horite ruler-priests, but the geographical distance was to be felt in the way that Arabic (Dedan-Ramah) and Aramaic (Haran-Ur) developed.

We first meet Abraham in the region of Haran and Ur because he is a descendant of Nimrod.

The name Nimrod is formed from the phonemes nim (water) and rd (earth, globe or orb) and is a royal title of ancient Egyptian origin. A son of Osorkon III of Thebes (23rd Dynasty) was named Nimlot. Rulers in Egypt with the name Lot include Luwelot, Nimlot and Takelot. Egypt is the origin of the biblical names Nimrod and Lot. Nimlot C was the High Priest of Amun at Thebes during the latter part of the reign of his father Osorkon II. He died before the end of his father's reign and his son Takelot II succeeded him as High Priest of Amun.

The word nim is associated with water. A water shrine called Nimrah or Beth Nimrah is mentioned in Isaiah 15 and Jeremiah 48. It is mentioned in association with Zoar and Horonaim (Hebrew: horim, horoni, referring to Horite devotees of Horus. Horus was the only Egyptian/Kushite deity to be incarnate as a man.  Beth Nimrah appears to have been near the Dead Sea. In Joshua 13:27 and Numbers 32:36 Beth Nimrah is paired with Beth Haran. Both were fortressed cities with enclosures for flocks. Again, the water shrine of Nimrah is linked with the Horites, since Haran is a Horite name.

Nimrah likely means the waters of Ra the Creator. It is possible that Jesus was baptized here. Sir George Grove in Dictionary of the Bible identifies Bethabara as Beth Nimrah, a few miles above Jericho (see Beth-nimrah), accessible to Jerusalem and all Judea. If this is the water shrine where Jesus was baptized, we have another connection to the Horite expectation that the Son of God would restore the waters He had created at the beginning (as in Eastern Orthodox belief). John didn't understand why the Pure One should come to him to be ritually cleansed, but Jesus said that it was necessary "to fulfill all righteousness" (Mat. 3:15).

Note that Jesus doesn't say that his baptism by John in that place is to fulfill the Law of Moses.  For that, Jesus could have stayed in Jerusalem and washed at the pool of Siloam. The righteousness of which Jesus speaks is much older than the Law of Moses. It harkens back to Genesis 3:15 (the Edenic Promise)and to Genesis 1.

So the Orthodox sing at the Feast of the Baptism of Christ our God:

When Thou wast baptized in the Jordan, O Lord,
The worship of the Trinity was made manifest.
For the voice of the Father bore witness to Thee,
And called Thee His beloved Son.
And the Spirit, in the form of a dove,
Confirmed the truthfulness of His word.
O Christ God, Who hast revealed Thyself,
And hast enlightened the world, glory be to Thee!


Related reading:  Desert Dunking 2000 Years Ago; The Blessing of the Waters; Nimrod: Afro-Asiatic Kingdom Builder; The Testimony of Blessed John, Forerunner; The Stirring of the Waters