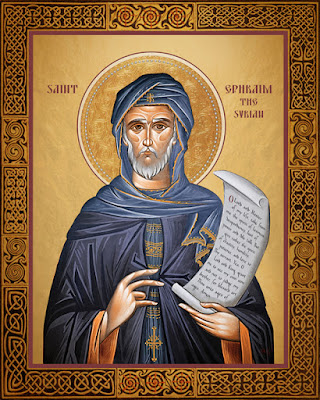 This icon of St. Ephrem the Syrian may be purchased here.


St. Ephrem the Syrian lived from A.D. 309-373. His poetry is beautiful and at times makes me cry. I mean that literally.  I've actually wept at reading his work and I know it is because the Spirit moves me at those moments. I'm not surprised that Ephrem's writings were read in the early church.

Ephraim, deacon of the church at Edessa, composed many works in the Syriac language, and became so distinguished that his writings are repeated publicly in some churches, after the reading of the Scriptures. I once read in Greek a volume by him On the Holy Spirit, which some one had translated from the Syriac, and recognized even in translation, the incisive power of lofty genius. He died in the reign of Valens. (LIM 115)

St. Ephrem's reflections on Genesis (Volume 91 in The Fathers of the Church series, The Catholic University Press of America) reveal an expository style that makes his Genesis reflections enjoyable reading. Besides being an excellent Bible scholar, Ephrem's use of language is so lyrical that he is called “The Harp of the Spirit.”

St. Ephrem’s approach to Scripture avoids the literalism of Fundamentalists and the allegorism of the Alexandrian school. He approaches Genesis as history, type, symbol and pattern. Ephrem’s method has been termed “symbolic theology” and has been described as “an intricate weave of parallelism, typology, names and symbols.” (The Fathers of the Church, vol. 91, p. 48)  For St. Ephrem, types, symbols and patterns are woven throughout creation and are Christ God’s invitation to perceive Him and to share in the divine life He offers.

I encourage you to acquire St. Ephrem's works.  A good volume to begin with is Sebastian Brock's translation of St. Ephrem's Hymns on Paradise, published by St. Vladimir's Seminary Press (1990).

Here are some of my favorite parts from Hymn on Paradise.


Joyfully did I embark
on the tale of Paradise --
a tale that is short to read
but rich to explore.
My tongue read the story’s
outward narrative,
while my intellect took wing
and soared upward in awe
as it perceived the splendor of Paradise --
not indeed as it really is,
but insofar as humanity
is granted to comprehend it.

Scripture brought me
to the gate of Paradise,
and the mind, which is spiritual,
stood in amazement and wonder as it entered,
the intellect grew dizzy and weak
as the senses were no longer able
to contain its treasures --
so magnificent they were --
or to discern its savors
and find any comparison for its colors,
or take in its beauties
so as to describe them in words.

Hymn 7 relates the order of the creation in the rising and setting of the sun to the death and resurrection of the saints.

In the evening the world sleeps,
closing its eyes,
while in the morning it arises.
He who repays is distant
as it were but a night’s length away;
now light dawns and He is coming.
Weary not, my brethren,
nor suppose
that your struggle will last long
or that your resurrection is far off,
for our death is already behind us,
and our resurrection before us.

In Paradise the life cycle of the trees
resembles a necklace:
when the fruits of the first
are finished and plucked,
then the second ones are ready,
with a third species following them.
Who has ever beheld
the autumnal fruits
grasping the heels
of the first fruits,
just as Jacob grasped hold
of his brother's heel?

When the blessed Apostles
were gathered together
the place shook
and the scent of Paradise
having found its home,
poured forth its perfumes,
delighting the heralds
by whom
the guests are instructed
and come to His banquet;
eagerly He awaits their arrival
for He is the Lover of mankind.