The Tower of Babel 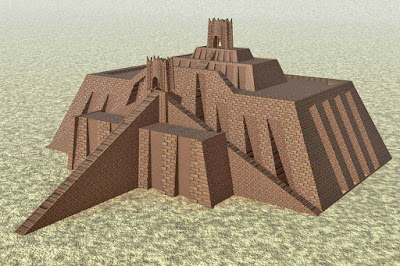 Model reconstruction of the ziggurat at Ur

We do not know the exact nature of the tower of Babel. It is generally assumed that this was a ziggurat, but it may simply have been a tower. Towers were used for astronomical observations and as watchtowers for defense. If the biblical writers meant a ziggurat, why ndoes the text not use the Akkadian word for such a royal complex? The term "ziggurat" comes from the Akkadian word ziqqurratu, which is translated as "rising building" (from Akkadian zaqâru, "to rise high"). (Many Akkadian words appear in Genesis.) Instead. the Hebrew reads: מִגְדַּל בָּבֶל‎, (Migdal Bavel). A migdal is also a sacred pillar.

Genesis only describes the structure as a tower of baked brick and mortar in a city. If the writer is speaking of a ziggurat, we would expect more description. For example, the Babylonian ziggurat typically had ramparts. Genesis does not mentioned ramparts.


The  offers an explanation for the linguistic diversity among the biblical populations listed in the Genesis 10 Table of Nations. Yet all those populations spoke languages in the same language family, as is noted in Genesis 11:1. One theory is that this story is speaking of a common Proto-Nostratic group. It is more likely that the populations listed were linguistically related as they were all in the Proto-Afroasiatic group that emerged about 30,000 years ago. By then these populations were already dispersed as shown on this map. 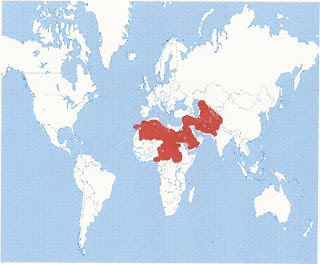 Should the story be taken literally? That would require forcing an interpretation on the Genesis text that goes beyond the biblical data. All the peoples listed in Genesis 10 are in Y-DNA Haplogroup R and were dispersed long before the time of the ziggurats and the rise of the Babylonian Empire.

Sadly, the Tower of Babel story has been used by Ken Ham's Young Earth Creationists to advance the racist notion that linguistic diversity is the result of God's judgement on sinful mankind. This is stated in one of the 12 Affirmations and Denials found at the back of some of Ham's books. Affirmation XII claims that the diversity of languages and skin color came about as a result of divine judgment at the Tower of Babel.


The Tower of Babel story comes from a time much later than Abraham. The narrative is used to speak of the contagion of sin which can increase when moral corruption is tolerated by rulers and embraced by the masses. The empire is lost. The peoples are scattered. The device of scattering is found in other places in the Bible as an antidote to sin or rebellion. Consider the Scatter-Gather Motif in Judges and elsewhere in the Bible.

The Tower of Babel story shows that the rebellion that took place in Eden was not limited to a single couple, but characterized whole populations. This speaks of the contagion of sin. The archaic rulers were a powerful force in shaping the ancient world, but they over-reached, as is common of civilizations that think they are invincible. This same hubris is shared by all peoples and their rulers. In our own ways, each of us is trying to build a tower to heaven by our own efforts.


Linguistic "Confusion" pertains to the separation of kinsmen

The Tower of Babel was to make a name for the rulers, not to glorify God. The confusion of languages serves to weaken the control of the rulers. Comparative Linguistics serves to explain the connection between proto-languages and is extremely helpful to understanding the linguistic roots of the Horite Hebrew, Abraham's ancestors. However, little consideration is given by linguists to the Genesis data in chapter 4-11. That is unfortunate, because the biblical text provides important clues about the archaic peoples and their rulers.

One linguistic division is likely represented by the data concerning the brothers Peleg and Joktan.

To Eber were born two sons: the first was called Peleg, because it was in his time that the earth was divided, and his brother was called Joktan. (Genesis 10:25)


This verse refers to Joktan the Elder who married a daughter of Sheba the Elder. This means that Sheba the Elder of Arabia was a contemporary of Eber the Asiatic. The ruler-priest lines of Eber and Sheba intermarried according to the kinship pattern of their ancestors even after the ruling lines became geographically separated and linguistically distinct. So the Tower of Babel story speaks of real historical developments. Apparently, the linguistic divergence to which the story alludes began at least five generations before Abraham.

The intermarriage of the lines of Eber the Aramean and Sheba the Arabian means that wives were chosen from kin living in distant territories (as happened with Jacob). Their pattern of marriage parallels that of the lines of Cain and Seth, and the lines of Ham and Shem.

When Genesis 11: 1 speaks of the whole world having one language, it speaks from the perspective of the Afro-Asiatics. It is not speaking of all peoples and languages.  The languages listed in Genesis 10 are all Afro-Asiatic and languages of peoples living in the Levant which was controlled by Afro-Asiatic rulers. The Afro-Asiatic family is the oldest known language family. This is proof of the reliability of the Genesis record. For example, were the Chinese and Polynesians listed here, we would know that someone had corrupted the text, since Abraham's people had no knowledge of those groups 7,000- 6,000 years ago.


Related reading:  YEC Dogma is Not Biblical; Peleg: Time of Division; Noah's Sons and Their Descendants; The Afro-Asiatic Dominion; Afro-Asiatic Rulers; The Lines of Ham and Shem Intermarried; Was Abraham an Idol Worshiper?