Traditional Anglicans have been engaged in a fruitless dialogue with the Revisionists who took control of the Episcopal Church and imposed an agenda that converted that church into a political organization. That argument has gone on and on, but since Dublin it has become clearer that there is another significant divide within the Anglican world. It is the divide between Modernists and Traditionalists. What was concluded about Dublin may apply to Modernists who call themselves "orthodox." Concerning that meeting it has been written:

The total disregard for tradition and order among some Anglicans is summarized by this statement following the Dublin meeting: "Those meeting in Dublin staked no claim to continuity with the past, ignoring the will of the most authoritative of the Instruments of Communion—the Lambeth Conference of Bishops.

For all these reasons, the group of Primates who met in Dublin cannot be recognized as acting in accord with the accepted Communion understanding of the Primates’ Meeting as an Instrument of Communion. This Instrument thus joins the others as now being dysfunctional and lacking in communion credibility. (From here.)

Traditional Anglicans are finding dialogue with Anglican Modernists frustrating and fruitless. This becomes apparent when Traditionalists try to discuss pressing concerns, such as whether or not the new American Anglicanism is merely another form of Evangelicalism, an expression of Christianity that ignores key features of classical Anglicanism with its emphasis on the true Book of Common Prayer, the ecumenical councils, and the veneration of the Virgin Mary. If the new American Anglicanism is about praise bands and Protestant preaching, why bother to worship with Anglicans? The non-denominational mega-churches do that much better!

Another pressing concern is the ordination of women to the priesthood. This is a topic that Anglican Modernists insist on either ignoring or censoring at their blogs. To question this dangerous innovation is to invite accusations of being sexist.

Some Anglican evangelicals are as set against discussion of women's ordination as are the modernists. I experienced this at Stand Firm and at T19 when the Elves deleted the following pertinent comment by Fr Jay Scott Newman:

The primary category mistake of most Anglicans seems to be a refusal to accept the Principle of Non-Contradiction. For example, either sodomy is a grave sin or the foundation of a sacrament, but it can’t be both. Or, either it is possible that women have the capacity to receive presbyteral and episcopal ordination or they do not, but it can’t be both. Let’s forgot for a moment the authority of Apostolic Tradition which every Catholic must believe is an intrinsic part of the Gospel (no sola Scriptura for us), when a foundational principle of right reason like Non-Contradiction is routinely denied in practice if not in theory, then the only thing left is raw will to power. Hence the General Convention of the Episcopal Church. Kyrie eleison.

A friend noticed this sudden deletion of Fr. Newman's comment at T19 and wrote to me that he can't decide if it "is more comic, or pathetic -- perhaps farcical is the mot juste -- to see how those 'elves' rush to suppress discussion of WO, as though that 'elephant in the room' were a mere mote of dust or other bagatelle."


Come Let Us Reason Together

That is the Lord's plea, and oh! that we might heed it concerning our sins, our arrogance and our divisions.

What does it mean to reason together?  At the very least it means that we should use critical thinking skills, such as the principle of Non-Contradiction.  Fr. Newman was lifting up the fact that this isn't happening among Anglican Modernists any more than it is happening among Anglican Revisionists. It was at this point that comments were deleted at T19.

Here is where we find Modernists and Revisionists more chummy than we might have imagined. They either are unwilling to base arguments on sound logic or they insist on being childish. Allow me to illustrate.

Christians who profess the Apostolic Faith find it impossible to dialogue with those who hold revisionist views and adhere to revisionist practices, such as same-sex ceremonies in the Church.

For some time I thought the problem in Anglicanism was that modernism and heresies had eroded the foundations of Holy Tradition. These eviscerate the core of Christian belief and lead to disturbing practices, but the real problem is spiritual. Revisionists and Anglican Modernists prefer ambiguity because then they don't have to struggle with the hard issues and they can continue in their childishness.

Here is an experiment which illustrates the childishness of which I'm speaking and to which Fr. Newman's comment points.

Some years ago, I conducted an experiment with Sewanee faculty and graduate students to test why dialogue with Revisionists and Modernists is so difficult and generally fruitless. Here is the experiment, involving 6 imperatives. It is limited in scope, but still illustrative.

Imagine a medium slightly curved yellow banana and a yellow Magic Marker. One end of the banana has been removed, revealing a circle of white fruit. The Magic Marker has a yellow cap and on the opposite end there is a round white bottom. In the experiment, I presented these objects to 5 men and 5 women and asked them to respond to 6 imperatives. The banana and marker were placed side by side on a table with the white ends toward the person interviewed. Each person was asked in private to do the following:

Most enjoyed this experiment. As I said before, Revisionists and Modernists love ambiguity. Traditionalists call it "Anglican fudge."

Coming next to imperatives 3 and 4, we find associations. All ten participants selected the banana as being like the moon. When I asked how each came to this conclusion, eight answered that the banana's curve reminded them of a crescent moon. Two further noted the white circular end of the banana as being like a full moon. One also noted the white circular end of the Magic Marker and thought it looked like a full moon, but decided that the banana was still "more like the moon."

Revisionists and Modernists enjoy the association game because it allows for a range of opinion based on subjective associations and distracts from substantive concerns.

With these, there was universal agreement. For all 10 participants the choice was unambiguous and the selection was made immediately.

God created humans with a male and female teleological distinction. It is obvious that God did not create gay and lesbian, as there is no language in Scripture and Tradition defining the purpose of gayness and lesbianism. It is obvious also that God didn't create women priests since there is no feminine equivalent to the catholic understanding of priest or sacerdote, which shows that "woman priest" does not represent an ontological reality. To get around this, some have latched on the word presbyter, but presbyter (elder) is not equivalent to sacerdote (priest), and even if it were equivalent, the term "elder" refers to a man also.

In a fit of childish willfulness, Revisionists and Modernists are likely to insist that the banana is for writing and the marker is to be eaten. A typical response to the Traditionalist is the assertion of one's right to believe as I see fit:  "I see it differently," but this doesn't fly when everyone except the Revisionist and Modernist recognizes that the banana is food and the marker is an implement. So it is that natural and intended purposes cannot be discussed intelligently with Revisionists, Modernists and many Neo-Anglicans. Natural and intended purposes speak of order and precision, and of Church Tradition which is neither ambiguous nor childish.


Related reading: The Mushy Thinking of Neo-Anglicans;  Growing Consensus That WO Must Be Addressed; Affirmation of St. Louis; Impressions of North American Anglicanism


Quiz:  Who are the following people and what do they represent to you? 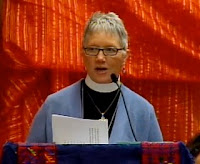 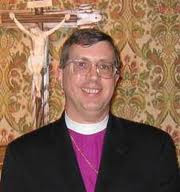 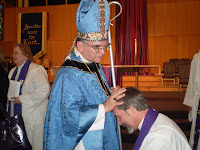 OK, as an ex-TEC member, now orthodox (GOA) I'll take the quiz, and show what I don't know.

(3) Bob Duncan was rector at St Thomas in Newark DE a few years before I passed through there, and before he was elected bishop (90s), was sorry I missed him. St Thomas then had an uneasy mix of revisionists and somewhat traditional folks worshipping under the same roof. I like Duncan but I think his view of Anglicanism is to effectively return to the condition of the ECUSA of about 1980, an unstable point that will degrade to something else, or fly apart.

Number 3 stands between a priestess and a priest. I think of him as another Henry Clay.

1. Susan Russell - Pansexuality promoter posing as a priest...wants to revise, redefine and redesign everything: good and evil, truth, love and life, male, female, marriage. Scripture is a loose-leaf book of impressions, suggestions, myths, window dressing for their agenda and purposes.
2. Bishop Mark Haverland who has just refused the Roman Catholic Ordinariate on behalf of the Anglican Catholic Church. The ACC is not giving up on Anglicanism and not convinced the Romans have anything better.
3. Archbishop Robert Duncan, whose new Province is too catholic, not catholic enough, too evangelical, not evangelical enough, too charismatic, too innovative, too dogmatic, not-traditionally Anglican, not reformed enough and too reformed.

I'd say you scored an A on the quiz. You've been doing your homework!

*******BANANA UPDATE: A yellow banana may appear to be used to function in the pattern of a yellow marker, but will leave a mess all over creation in its quest to not be what it is.

You passed! I would return your quiz with a number of questions in red ink. :)