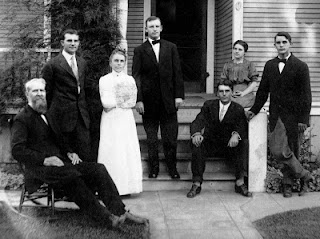 The Rev and Mrs. Williams at home in Redlands, California in 1915
with their children, shown here from left to right:
Robert (chemist), Henry, Paul, Alice (philosophy professor) and Roger (chemist)

May her memory be eternal.


My paternal grandmother, Alice Williams Linsley, was born in India in 1883, the daughter of pioneer missionaries. She was the only daughter and had 4 brilliant brothers. One was a Philosophy professor in New York City. Another was a successful businessman and finance consultant. Another was Dr. Roger J. Williams, the biochemist who discovered pantothenic acid and concentrated and named folic acid. The fourth brother, Robert R. Williams, published the chemical formula of vitamin B1 (thiamin) in the 1930s and set out to eradicate Beriberi in the Philippines.

My grandmother met her future husband at Redlands University. She married Paul Judson Linsley, a published poet and horticulturalist who cultivated hybrid roses with Luther Burbank of Santa Rosa, California. He also developed several strains of disease resistant avocado trees. His twin brother was Earle Garfield Linsley, a well known astronomer and former Director of the Chabot Observatory in Oakland.

My grandmother may have felt overshadowed by all this brilliance and productivity, but I doubt it. She too was an exceptional individual. She was ordained to the “Defense of the Gospel” in 1925 and she read the Bible in four languages, one of which was Telegu. The Telegu translation of the New Testament was largely the product of her father’s labors.

I was named after a woman of great faith and I am humbled and honored to uphold this godly heritage. What follows is my father’s testimony about his mother, Alice Williams Linsley.

My sheep hear my voice, and I knew them, and they follow me: And I give them eternal life; and they shall never perish, neither shall any man pluck them out of my hand. --John 10:27,28

By anybody’s standards my mother was an extraordinary person. She was born in Ramapatnam, India, in 1883 the eldest child and only daughter of Baptist missionary parents. Until she came to the United States at age twelve, she had no experience in going to school in the customary sense and spoke only Telegu, a Hindu dialect. Even so, she did well in school and ultimately graduated from Ottawa University in Kansas and later went on to obtain a master’s degree and to become a teacher at the University of Redlands.

She was a master of the English language and read her Old Testament in Hebrew and her New Testament in Greek; and- what is perhaps more unusual – she was a minister, ordained by a church which was then part of the Northern Baptist Convention.

As a small boy, I probably heard my mother speak more times than did any other person, but you will have to excuse my fogginess with respect to sermon content. I just didn’t get it. I do remember that her approach was always positive, that she had a kind of Churchillian eloquence, and that she spoke easily and with great personal conviction.

For the first thirty-seven years of my life I did not know what it meant to be a Christian. But I could not have been an atheist, for in all of my years of floundering in darkness I never once doubted that my brilliant, praying mother knew what she was doing.

Near the end of her life she literally became as a little child. Her magnificent mind was damaged by a massive paralytic stroke that deprived her of her remarkable abilities to write and to speak. She required constant care and was unable to acknowledge that she understood anything that I said. She knew me, her only son, and at our last reunion she seemed to enjoy listening to my voice as I stood by her bed and read to her about the good shepherd from the tenth chapter of the Gospel of John. When I finished, she took the Bible in her one usable hand, raised it to her lips and kissed it, and smiled radiantly; and then suddenly, as if very tired, she dropped off to sleep. I never saw her again. Several months later she was liberated by death.

To have a funeral for Mother would have been a kind of blasphemy. So we simply had a reunion in the church to which she had given so much of her life. We asked her favorite young pastor to come and conduct a service of worship and praise. Long before that service started, my mother’s earthly remains had been buried in an unmarked grave in a public cemetery. There was no graveside ceremony. Her mortal clay was attended by a solitary grave digger. Mother simply was not there. She was “present with the lord.”

We began the service by singing one of Mother’s favorite hymns. Because it had been her father’s favorite, she especially liked “There is a Fountain Filled with Blood.” We also sang George Matheson’s great hymn, “O Love That Wilt Not Let Me Go.” Then Dr. Ivan Bell, my mother’s pastor, explained to the crowd what my mother believed. There was not a tear from any member of the family – husband, children, or grandchildren – just a kind of joyful sadness, as in our minds we placed her great faith alongside of the promises of God.

When Dr. Bell finished, a prominent judge, who, at sixteen, had accepted my mother’s invitation to give his life to Christ came to the platform; with marvelous love and a lawyer’s consummate skill, he pretended to talk to members of the church who had long since been in glory, calling each one by name and reminding us that my mother had brought them to Jesus. There is no possible doubt in my mind that seeing this parade of people in heaven would have been the grandest reward my mother could ever have contemplated.

Flowers were deliberately limited to one great bouquet sent by mother’s four distinguished brothers. But because Mother had been a Sunday school teacher for more than sixty years, members of her Sunday school class collected several hundred dollars to be used in Mother’s memory. This money was sent to the Christian in Ramapatnam, India, who read the New Testament in Telegu and worship in a beautiful sanctuary which I was able to visit in the 1950s. Both the Telegu New Testament and the church are products of my grandfather’s loving concern and personal efforts.

The persistent claim of Christians like my mother is that the man Jesus was God; He was not merely “divine” but God, declared to be God by His resurrection from the dead.

Those who accept Him have eternal life and those who reject Him are condemned already, He says, and will never see life. When one believes this, as I now do, it becomes clear that the ultimate tragedy of life is not death but rejection of Jesus, the Christ. The only real failure is not to give you r life to Him. Death simply marks the end of the time of testing and opportunity. For those who die having rejected Jesus the tragedy is irrevocable and complete.

But the Bible says that Jesus came to “deliver them who through fear of death were all their lifetimes subject to bondage” (Hebrews 2:15). For the “Christ-one,” death means eternal glory. In the words of our Savior, “I am the resurrection and the life; he that believeth in me, though he were dead, yet shall he love: and whosoever liveth and believeth in me shall never die” (John 11:25,26)

This a wonderful testimony, Alice. Thank you so much for sharing about your grandmother, and in the process, about your father. Perhaps this touched me so because I cared for my own mother for nine years after her debilitating stroke. Watching loved ones look toward Jesus at the end is a worship experience all it's own.
Thank you for your blog... I learn so much.

Thanks, Sarah and Robert.

I think that you will enjoy the up-coming post about my father's conversion. I'll also post one of his sermons in video form. It is titled "Amazed by the Doctrine of the Lord." These will be available in the next 5 days.

Here is my father's testimony.