The “begats” of Genesis list ruler-priests of a vast territory that extended from Nigeria to India between10,000-3000 years ago when this part of the world was wet. The point of origin of these rulers and their people is biblical Eden, a well-watered region that extended from the Nile Valley to the Tigris-Euphrates Valley.
In Noah’s time (about 2,500 BC) this region was much wetter. Lake Mega-Chad had an area of 249,000 miles and connected several lakes and rivers. Lake Mega Chad was about 600 feet deep.

The water systems controlled by the rulers included the Nile, the Red Sea, the Jordan River and the part of the Sahara that was wet in the late Holocene. Southern Arabia was also much wetter. The region is called Ha-dhra-maut, derived from dhara which in the Dravidian referred to channels of water and maut which in Egyptian meant mother.

This 8000 year old dugout (shown right) was discovered 16 feet below the Saharan clays and sands in the Upper Yobe valley along the Komadugu Guna River in Northern Nigeria. (The oldest Egyptian boats are only about 4000 years.) 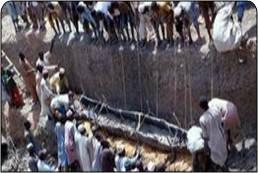 The rulers of this region expanded their territories and established new territories. One such ruler was Nimrod, known as Sargon the Great. He moved into the Tigris-Euphrates Valley and built great cities there. An earlier city builder was Kain (Cain) who lived at the western edge of Eden.
The great water systems were interconnected then, making movement between the land masses easier. The movement of Abraham’s Kushite people out of Africa has been confirmed by DNA studies, linguistics, archaeology and biblical anthropology.

The symbol of the ruler and his territory was the tent peg, represented by the vav in modern Hebrew (waw in ancient Hebrew and in Arabic).

The waw/vav orignally symbolized the crook/hook of the ruler or the tent peg of the ruler's tent. As a glyph this represented a cluster of related ideas including:


The waw/vav speaks of an ancient world in which settlements near water were ruled by elders and a chief. Travelers moved from settlement to settlement and the ancient water laws were generally generous to those who wa-ndered. Wells were neutral ground for waring parties or enemies, but were fought over, as in the story of Moses driving away the intruder shepherds at the well of the Midianite ruler-priest Reu-el. (Exodus 2:16-19). It was common for the river, lake, oasis or well to have a shrine over which their was a priest. So it is not surprising to read that Moses' future father-in-law was a "priest of Midian." As such, he was a direct descendant of Abraham by Abraham's cousin bride, Keturah.

The great chiefs of the biblical world were designated as such by the initial Y in their names. This is more evident in Hebrew than in English. Consider the following:

Consider the importance of wells in the lives of these biblical figures. Ishmael's life was saved when an angel revealed a well or spring to his mother. Abraham's servant found Isaac a wife at a well. Moses met Zipporah at a well. Jesus met the Samaritan woman (Photini) at Jacob's Well.


Related reading: Egyptian Shrines on the Horus Way; Water Systems Connected the Nile and Central Africa; The Jordan River; Wells and Brides; The Migration of Abraham's Kushite Ancestors; A Woman at a Well; Susan Burns on Hadhramaut of Arabia