Israeli archaeologists recently reported the discovery of a 2,000-year-old clay seal near Jerusalem's Western Wall. The Western Wall is part of the compound revered by Jews as the Temple Mount, where Islam's al-Aqsa Mosque and Dome of the Rock are situated.

The archaeologists decided that all of the soil removed from the site would be meticulously sifted. This is being done with the help of thousands of students and is underwritten by the Ir David Association.

During the sieving process a button-shaped seal of fired clay was discovered. The seal is stamped with an Aramaic inscription consisting of two lines. Archaeologists Eli Shukron of the Israel Antiquities Authority and Professor Ronny Reich of the University of Haifa said, “The meaning of the inscription is “Pure for G-d”. 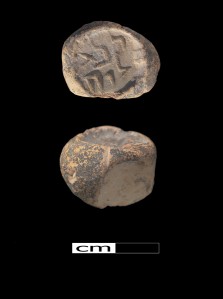 The upper line דכא and below it ליה
Following the preposition “ל” in the word “ליה” is the shortened form for the name of G-D.

﻿The Priesthood and Purity

The priesthood was in the ancient Afro-Asiatic world involved water and blood ritual for purification. This is reflected in the linguistic connections between the Hebrew root thr - to be pure, the Hausa/Hahm toro - clean, and to the Tamil tiru - holy. All are related to the proto-Dravidian word tor and to the ancient Egyptian tr, meaning blood.

The Horite Hebrew priest was purified before entering the temple. His purification involved fasting and an intense period of prayer. The purification ritual involved bathing and shaving the head. Korah, Moses' half-brother, was a priest. His name means "shaved head" and according to Numbers 16:17-18, he carried the censor to offer incense before God.

﻿Related reading: The Origin of Animal Sacrifice; 2400 B.C. Tomb of Purification Priest; The Horite Conception of the Priesthood