The Nilotic Context of Genesis 1:1-2


Genesis 1 should be considered in the context of Abraham's Nilo-Saharan ancestors from whom we received this amazing account. The elements of Genesis 1 align very closely with the creation accounts of peoples who live in the Nile region or who migrated from the Nile. The correlation of theme, language, and device is much closer to the African than to the Babylonian stories. Also the theology expressed is distinctly Nilotic, as will be demonstrated in this parsing of Genesis 1:1-2.

In the beginning God ....
God was at the beginning. The Creator pre-existed eternally and is not constrained by time and space, as are creatures.

From reading Sumerian commercial records, the Egyptian Coffin Texts, and the Hebrew Scriptures it is evident that many Afro-Asiatic peoples believed that the earth emerged from a watery chaos. In the Coffin Texts we read, "I was the one who began (everything), the dweller in the Primeval Waters. First Hahu emerged from me and then I began to move."

Ha-hu is the wind (ruach in Hebrew) that separated the waters above from the waters below and the dry land from the seas.

The phrase "In the beginning God" is common in African creation stories and songs, such as this song of the Mbuti Pygmies:


In the beginning was God
Today is God,
Tomorrow will be God.
Who can make an image of God?
He has no body.

Contrast this to the Babylonian "Epic of Creation" in which Marduk is created to defend the divine ones from attack by the sea goddess Tiamat. Marduk offers to save them on the condition that he be appointed their permanent ruler. The gods agree to Marduk's terms. Marduk kills Tiamat and from her corpse, which he cuts into two parts, he fashions the earth and the skies.

Maat is the principle or platform whereby God orders the universe.  In the Psalms the principle is often called "wisdom" by which God orders all things. The principle of Maat includes equilibrium and harmony between constituent parts, the cycle of the seasons, celestial and planetary movements, honesty in social and business interactions and justice. There appears to be a relationship between Maat and Tehut, just as there is a relationship between the watery chaos and Tehom. 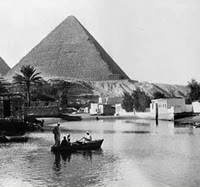 The victory of Tehut (order) over Tehom (watery chaos) relates to the annual inundation of the Nile and helps us to understand the Egyptian concept of creation as a mound emerging from a primal ocean (mer). The first life form was a lily, growing on the peak of the emerging dry land called Tatjenen. This is symbolized by the rising pyramid along the Nile.

The celestial waters were called Nun, a name that appears among the Horite chiefs in the Hebrew Bible. Joshua bin Nun is an example. Nun is found at the Horite shrine of Heliopolis in Egypt and represents the cosmic waters of the firmament above and firmament below (Gen.1:6). In Heliopolitan cosmology the watery realms were connected by the great pillars of the temple of Heliopolis (Biblical On).

In Genesis the primal chaotic waters are called tehom. Tehom was subdued by tehut which went forth from the mouth of God. The Hebrew phrase "formless and void" (Gen. 1: 2) is tohu wa-bohu and is of Nilotic origin. The word tohu in Isaiah 34:11 means "confused" so Genesis 1 evidently refers to matter in a confused state before God set things in order.

The Egyptians envisioned the first place as a mound emerging from a universal ocean. Here the first life form was a lily growing on the peak of the primeval mound. The mound was called Tatjenen, meaning "the emerging land." Anything that springs forth, mounds, emerges represented life and was termed bnbn (benben), from the root bn, meaning to "swell forth." This conception of land and life emerging from a universal ocean was represented by stone pillars, mounds of earth, and pyramids.


The earth was formless (tohu) and void/empty (bohu) ...
The formlessness of the earth could have more than one meaning. It may simply mean that God had not yet created the material world. However, the ancient Nilotic peoples may have been thinking metaphysically, that is to say, that God had not yet created the Forms or archetypes of which created forms are the shadow or reflection. Whatever is meant by formless, there was nothing on earth. This is conveyed in this account:

At the beginning of Things, when there was nothing, neither man, nor animals, nor plants, nor heaven, nor earth, nothing, nothing, God was and He was called Nzame. (Fan / Congo)
Boshongo

Darkness was over the surface of the deep ...

Darkness and chaotic waters are commonly associated with the beginning of creation.  This is expressed in the following African creation stories.

"In the beginning there was only darkness, water, and the great god Bumba." (Bantu / Central Africa)

"There was no sunlight... the whole land was in darkness." (Gikuyu / Kenya)

"In the beginning there was only the swirling watery chaos."  (Egyptian)


The Spirit of God was moving over the waters (mə·ra·ḥe·peṯ, Egyptian origin) ...

The Spirit (ruach) of God moved over the dark waters. The ruach of God is the breath of life. This  concept is found in Genesis 2:7: "the Lord God formed the man from the dust of the ground and breathed into his nostril the breath of life and the man became a living being." However, in the Babylonian creation myth Ea makes mankind from the blood of Kingu. 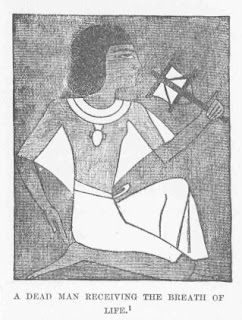 In the image above a dead Egyptian receives the breath of life flowing over a sail. The sail was associated with Ra's solar boat which rises after dying at the end of the day. By the wind/breath/spirit of the Creator, the deceased may enjoy life beyond the grave and avoid the second death. The Egyptians believed in the resurrection of the body and prayed for, offered sacrifice for and prepared the bodies of their dead in this hope. The African bishop Saint Augustine wrote "that the Egyptians alone believe in the resurrection, as they carefully preserved their dead bodies." ("Death, burial, and rebirth in the religions of antiquity," Jon Davies, Routledge, 1999, p. 27)


Related reading:  Adam and Eve: The Blood and the Birther; The Nubian Context of YHWH; Who is Jesus?; Genesis One Sets the Scene; The Christ in Nilotic Mythology; The Themes of Genesis 1-3