Answers to High Schoolers' Questions About the Serpent in Genesis

The serpent is a neutral symbol in the Bible. It symbolizes both good and evil. The serpent is an enemy to be trampled under foot (Gen. 3:15). In other references the serpent is to be lifted up (Num. 21 :4-9). The serpent in Eden is said to be wiser than all the other creatures and it tempts the woman to transgress. Jesus urges his disciples to be wise as serpents, yet gentle as lambs.

How can a single entity have two apparently opposite qualities, both good and evil? It is a mystery. Yet it is as real as a mobius strip, and as mysterious as the Biblical merisms of good-evil, night-day and male-female.
The way the bronze serpent coiled around the staff of Moses have reflected the sun's brilliance. It was actually a solar symbol. The Sun was the emblem of God among Moses's people. The coiled solar serpent on the staff indicated that Moses was God's appointed leader of the people. Even today, this image appears on the croziers of some bishops in the Church. 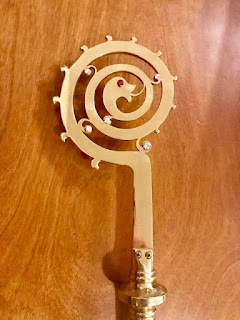 Q: Why was the devil in the form of a serpent?

A: Genesis does not say that the devil took the form of a serpent. It asserts that a serpent spoke and the woman heard. There are allegorical as well as historical explanations for this. Many Christians believe that the story of the serpent in Genesis has both levels of meaning; that is, it speaks to us symbolically and it speaks about something that actually happened in the past.

In the allegorical approach, the serpent embodies the devilish work that opposes God’s purposes. In other words, the serpent represents a rebellion inside the order of creation. Later, people came to imagine this creature as the Devil or Satan (the Accuser). However, in the time of Abraham and Moses the serpent was a symbol of divine appointment by the overshadowing of the sun. The sun was often pictured as a coiled serpent. Moses lifted up a staff with a serpent in the wilderness and told the people to look upon it and be saved. Numbers 21:8 tells us that God instructed Moses to do this:  The Lord said to Moses, "Make a snake and put it up on a pole; anyone who is bitten can look at it and live."

In ancient times the serpent or snake was associated with trees of poles.  In Genesis, the serpent is associated with the tree in the midst of the garden.  In Numbers, the serpent is wrapped around a pole.  Referring to His death, Jesus alluded to the story in Numbers, saying, "But I, when I am lifted up from the earth, will draw all men to myself." (John 12:32)  Jesus is Divine Healing Wisdom on the Cross which is called both a "tree" and a "pole" in Scripture.

In the natural-historical approach, the serpent actually existed and spoke to the woman. One explanation for how this may have happened involves the eating of plants that grow in the part of the world where Eden was located. Before the Fall, humans ate only plants. It is conceivable that the woman ate a combination of plants that caused her to see and hear a talking serpent (hallucination).

Such plants which are high in tryptamine alkaloids exist in the tropics of South America and Africa. In Africa, the Iboga plant produces such effects and is said by the shamans to take one back to the "beginning of time." The isolated active component ibogaine has been used in the treatment of heroin and opium addiction.﻿

In South America, shamans use a plant called Ayahuasca or Soga de Vida. Ayahuasca is an hallucinogen containing tetrahydroharmine (DMT), which when ingested is neutralized by the oxidizing action of peripheral monoamine oxidase-A (MAO-A), an enzyme in the lining of the stomach. Shamans circumvent the MAO inhibitor by inhaling or smoking the plant or by mixing the DMT with an MAO inhibitor that prevents the breakdown of DMT in the digestive tract.

According to the South American shamans, the cosmic serpent taught their ancestors which plants to mix to overcome the body’s natural protection. Combining ingredients allows the DMT in the Ayahuasca to have an hallucinogenic effect when orally ingested. The vine also contains harmaline which can cause vomiting and diarrhea, but it does not affect the shamans who develop a tolerance to its emetic and purgative effects.


In his study of ayahuasca among the Amazon natives, Jeremy Narby found that shamans of the Amazon see and communicate with serpents under the influence of ayahuasca. Narby maintains that nature is speaking to humans through hallucinogenic plants. The illogic of his view never occurs to him. If this is nature speaking, then why must the shaman neutralize the natural enzyme MAO-A in order to gain knowledge? This is cheating nature. People of God do not steal knowledge by drug-induced trances and hallucinations. Instead, they grow in wisdom through constant prayer, communion with God in Christ, the fellowship of the Church, and the study of Scripture. They become, not the mouthpieces of serpents, but of Christ our God.


Q: The serpent in Genesis is never directly referred to as Satan. Why is this?

A: It is true that the serpent in the garden is not identified as the Devil or Satan in Genesis. However, in Revelation the serpent is identified as "that ancient serpent called the devil, or Satan, who leads the whole world astray" (Rev. 12:9, 20:2).

Recalling that there are two trees in that story, we see that the serpent led Eve from the right choice - to eat of the Tree of Life - to the wrong choice - to eat of the Tree by which she hoped to become like God. This has been the Devil's primary approach throughout history. He attempts to lead us away from life by promising what he cannot give - divinity and immortality.

The serpent is one of the oldest religious motifs. Serpent veneration was rather widespread in the early Neolithic and before. The serpent was venerated among archaic peoples around the world. It was regarded as having powers to communicate, to deceive, to hide, to reveal and to heal and protect. The oldest serpent veneration is evidenced by the 70,000 year old python stone carved in a mountainside in Botswana.

The serpent motif is found in Africa, Arabia, Pakistan, India, Central Asia and the Americas. It is a significant symbol among traditional Africans and Native Americans, and in Judaism, Christianity, Islam, Hinduism and Buddhism. It is often found with symbols of the Sun and the Tree of Life. The great antiquity of these symbols is attested by their wide diffusion, yet their meaning has remained fairly stable in each religion. Only in Judaism and Christianity is the serpent associated with Satan and evil. In the Bible, the serpent is both good and evil; a kind of trickster whose words and advice always must be tested.

Surveying literature and ancient monuments, it becomes evident that the serpent is not believed to have the power to create something new. The serpent or serpent deity's "innovations" are imitations of what God has created, sometimes helpful imitations (See Doctrine of Signatures; herbalism), but often distorted imitations. Likely this is why the Apostle John warns us "do not believe every spirit, but test the spirits to see whether they are from God." (1 John 4:1)


Related reading:  The Dragon and Beast of Revelation; Serpent Most Subtle; Serpent Symbolism; The Cosmic Serpent Exposed; The Serpent on Moses's Staff

Hi Alice,
Could you maybe flesh that out just a little more for me. In Genesis, the serpent spoke to the women, and as it were, proceeded to accuse the Lord God, which ultimately lead Adam and Eve into sin. In Genesis 3, the deceiver is referred to as the serpent. Maybe were not talking about the same thing here, so please help me understand. Thank you for your very enlightening posts.
David A.

The serpent is not mentioned i Gen. 1 or Gen. 2

In Gen. 3:15 God promises that the "Seed" of the Woman (not Eve) will crush the serpent's head. Jesus claimed to be the Seed when He informed his disciples about His death, saying "unless a kernel of wheat falls to the ground and dies, it remains only a single seed. But if it dies, it produces many seeds." John 12:24

If I haven't answered your question, please let me know.