The Feast of Epiphany (or the Theophany) traditionally falls on January 6. On this day, depending on one's tradition and church calendar, the revelation of Jesus Christ as God's Son is celebrated with remembrance of his Baptism in the River Jordan or the visitation of the Magi. 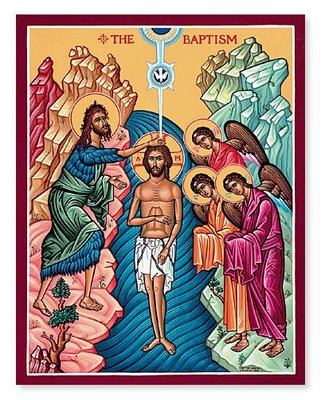 Eastern Churches following the Julian Calendar observe the Theophany on January 19. Saint John Cassian, who lived in the 5th century, reported that the Egyptian monasteries celebrated the Nativity and Baptism together on January 6.

St. Clement of Alexandria made what is perhaps one of the earliest reference to the Feast in Stromateis, I, xxi, 45:

And there are those who have determined not only the year of our Lord's birth, but also the day… And the followers of Basilides hold the day of his baptism as a festival, spending the night before in readings. And they say that it was the fifteenth year of Tiberius Caesar, the fifteenth day of the month of Tubi; and some that it was the eleventh of the same month.

The 11 and 15 of Tubi correspond to January 6 and 10. Among the ancient Egyptians January 6 or Mechir 22 was the Feast of Horus, the Son of Ra, whose emblem was the Sun. Horus was regarded as the one who divided the primal waters and set their limits.

Related reading: Theophany and the Gates of Hades; Nimrod and the Baptism of Jesus; The Blessing of Waters; Rumination on the Magi and Their Gifts; The Wise Men's Gifts (for my Hispanic friends); An Epiphany Poem; Royal Babies

Oh what a great blessing for you and your family Alice! Congratulations and Thanks be to God for the safe and easy birth of your new grandbaby. :-)

I pray the child comes greatly blessed into the world, and if God wills, on the very day of this wonderful feast.

Thank you for the history!

A granddaughter for you! What a wonderful Theophany blessing!

Keep praying. She hasn't arrived yet.

Julliette was born 9.5 pounds and 21.5 inches long on January 22. Mom and baby are doing well!