The Stirring of the Waters 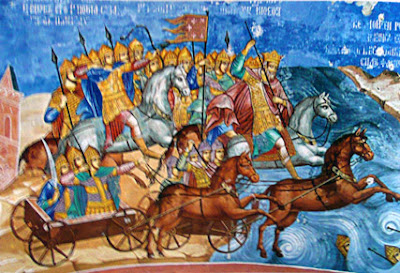 Crossing the Red Sea, a wall painting from the 1640s in Yaroslavl, Russia

The Bible contains many references to water. It is the primal substance at the beginning of creation (Gen. 1). It is used to cleanse, both ritually and literally. The blind man was told to wash in the pool of Siloam and the lepers were to wash before they showed themselves cleansed to the Temple authorities. The great military leader Naaman,when he sought to be cured of leprosy, was told by Elisha to wash 7 times in the river Jordan (II Kings 5:10). The Egyptians made their escape through water, and through the waters of baptism, we who believe receive spiritual regeneration. The Apostle Paul writes that we who are baptized into Christ "have been brought near in the blood of Christ” (Ephesians 2:13).

The most prestigious shrine cities of the ancient world were on major water systems like the Nile and the Tigris or Euphrates. Joseph married the daughter of the priest of On (Heliopolis), a prestigious shrine city on the Nile. His wife's name was Asenath or Asnat. The name sometimes appears in ancient texts as Mari-Anath. Mari means "mother" and is also the Egyptian word for Mary. Mari-Anath may be the same deified mother as Hathor, the mother of Horus. Her name sometimes appears as Hathor-Mari, and many water shrines were dedicated to her. Women came to the shrines to ask the Creator for children. These were places of healing where people went into the water when it was disturbed supernaturally by the wind (Ruach/Spirit).

Even today holy water is used by the Eastern Orthodox as an agent of grace for healing. The priest at Holy Apostles Orthodox Church (Saddle Brook, New Jersey) blessed the Saddle River in January 2014.The ceremony is called the "blessing of the waters" and it is believed that the baptism of "Christ our God" had the effect of making the water holy, and restores the waters of the earth to their original created purpose as an instrument of life.

Here is a description of the ritual: "The blessing was complete with a procession, singing, and Father Matthew trying not to slip in the mud when he blessed the river. The sun shined through the clouds just as we began the service joining our prayers and even the ducks came over to watch. Some say they saw the water stir when it was blessed." (From here.)

The idea of sacred pools can be traced back to the priests of the Nile Valley who also served as physicians. The Egyptian physician-priest was called wab sxmt (wab sekhmet). Sekhmet Eanach (3000 B.C.) was a physician-priest who "healed the pharaoh's nostrils." (Eanach is a variant of Enoch.) Imhotep (2600 B.C.) was the High Priest of Heliopolis (On) and his skill as a physician became legendary. The Greeks linked Imhotep to Asklepius.

The Greeks and Romans had a similar belief that rose around the cult of Asklepius. The rod of Asklepius is a snake-entwined staff, like that used by Moses for the healing of the snake-bitten Israelites in the wilderness. Asclepius' rod is a symbol of medicine today.

Elisha sent a messenger to say to Naaman the Syrian, "Go, wash yourself seven times in the Jordan, and your flesh will be restored and you will be cleansed." (2 Kings 5:10)

Piye of Nubia set out to conquer the Upper Nile in 730 B.C. He and his troops disembarked at Thebes, the capital of Upper Egypt. There Piye instructed his soldiers to purify themselves before combat by bathing in the Nile and sprinkling their bodies with water from the temple at Karnak. (Kar-nak means "place of rituals.")

Jesus told the blind man to wash in the Pool of Siloam. "So the man went and washed, and came home seeing." (John 9:7b)

In first-century Jerusalem the Pool of Bethesda [Bet-Zeta] was regarded as a place of supernatural healing. The pool was a reservoir for rain water in the 8th century BC, when a dam was built across the short Beth Zeta valley. John 5:2-9 tells this story:

Now there is in Jerusalem by the sheep gate a pool, which is called in Hebrew Bethesda, having five porticoes. In these lay a multitude of those who were sick, blind, lame, and withered, waiting for the moving of the waters; for an angel of the Lord went down at certain seasons into the pool and stirred up the water; whoever then first, after the stirring up of the water, stepped in was made well from whatever disease with which he was afflicted.One who was there had been an invalid for thirty-eight years. When Jesus saw him lying there and learned that he had been in this condition for a long time, he asked him, ‘Do you want to get well?' ‘Sir,' the invalid replied, ‘I have no one to help me into the pool when the water is stirred. While I am trying to get in, someone else goes down ahead of me.' Then Jesus said to him, ‘Get up! Pick up your mat and walk.'  At once the man was cured; he picked up his mat and walked."

Versions based on the Vulgate omit verse 4: "for an angel of the Lord went down at certain seasons into the pool and stirred up the water; whoever then first, after the stirring up of the water, stepped in was made well from whatever disease with which he was afflicted." This is because it is regarded as superstition and presumed not to be originally inspired. On the other hand, it is very likely an authentic picture of the beliefs of people living in Jerusalem during the time of the Second Temple.

Further, the supernatural stirring of sacred waters is a very ancient belief. In Genesis 1 the Spirit hovers over the waters. The image is that of a great bird. The flapping of the bird's wings caused ripples on the surface of the water.

In the beginning God created the heavens and the earth.2 Now the earth was formless and empty, darkness was over the surface of the deep, and the Spirit of God was hovering over the waters.

The Polish anthropologist, Bronislaw Malinowski, discovered a similar belief among the women of the Trobriand Islands in the South Pacific who believed that conception occurred by entering the sacred lagoon when the waters were stirred.

Related reading: Water and Blood; The Blessing of Waters; Genesis in Anthropological Perspective; Between Heaven and Earth: Birds in Ancient Egypt

Alice, as I've been thinking about your post, I've also thought of the birds that were released by Noah from the ark. Again a fluttering of wings over the watery chaos. And an emergence of land from the water. A separation and "recreation."

Joseph, What a lovely and powerful image!

Do you subscribe to the theory that the Pool of Bethesda is the same as the Pool of Siloam (or Shiloah) - just another name for the same place? Since there is only one living spring source in Jerusalem, the Gihon spring, it can be assumed that references in Isaiah 8:6 to the “gently flowing” waters of Shiloah, and in Isaiah 22:9 to the spring that was diverted by King Hezekiah (2 Chronicles 32:30) via a tunnel to vent into a pool in anticipation of the siege of Sennacharib, probably all refer to the same pool.) Doesn't name Shiloah in Hebrew equate to something like “He who is for her,” (or, so I have heard it explained)? If so, wouldn't this Gospel story (one of the seven Signs in the Gospel of John) relate prophetically to the divine promise given to the Woman about a future messiah in Genesis 3:15? More precisely, the significance of this particular "sign" is what emerges from the assertion that the salvation/healing of the invalid doesn't have to come from a good angel who stirs the waters, but from a "man" (Gk. anthropos), which is why I would prefer the KJV transl. of Jn. 5:7 ("Sir, I have no man") to the RSV transl. ("Sir, I have no one"). Indeed, the pitiful "I have no man" is well answered by the "Behold the Man!" in Jn. 19:5.

There's more. The way you tie the Pool of Bethesda to a redemptive Woman, full of grace (the word "Bethesda" means something like "house of grace", or "house of mercy") might get even more emphatically corroborated by linking the source from which water in the pool is being collected. Not rainwater, I would suppose, but the Gihon spring in Jerusalem. I am of an understanding that the Gihon spring in Jerusalem was originally utilized at its source through a well referred to as the Well of the Virgin. The name Gihon, which means “bursting forth” or “gushing forth,” conjures both the image of a lively spring of water breaking through the rocks and the image of the Virgin who gives birth to a child breaking from the womb, and the word-image is indeed used this way in the Scriptures (e.g. Psalm 22, one of the very messianic ones: “On thee was I cast from (gihon) the womb: from my mother’s womb, Thou art my God.” vs. 10)

Wow! Jonathan, that is a wonderful and intuitive connection; reflective of the way that Hebrew words can convey levels of meaning.