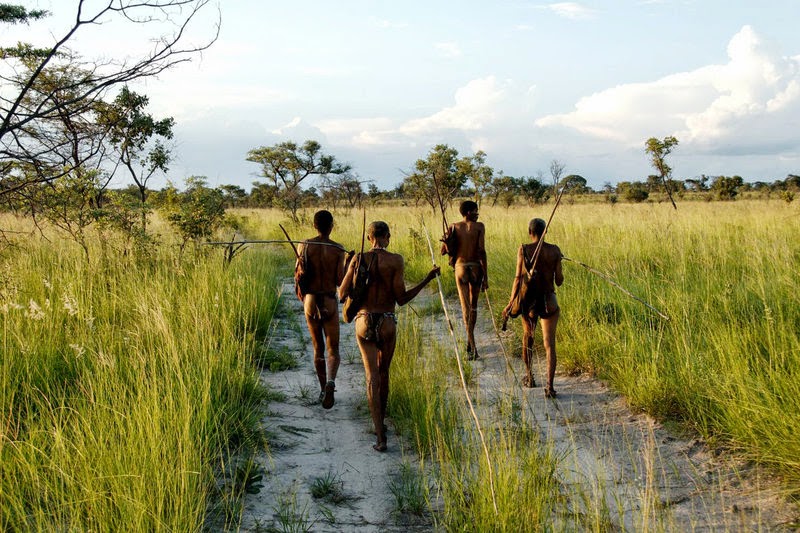 Some 22,000 years ago, they were the largest group of humans on earth: the Khoisan, a tribe of hunter-gatherers in southern Africa.

Today, only about 100,000 Khoisan, who are also known as Bushmen, remain. Stephan C. Schuster, professor at Nanyang Technological University in Singapore, has published new research about the tribe, many of whom now live in poverty, their cultural traditions endangered. We spoke to Schuster about his study and the lives of the Khoisan.


This NPR report barely scrapes the surface when it comes to putting the pieces of the ethnographic puzzle together. Study of the Khoisan and other "endangered peoples" is essential to seeing how the pieces fit together, but one wonders why someone felt it necessary to put the climate change spin on the report?

The term "Khoi-san" represents the relationship between the Khoe-Khoe (Hottentot) and the San (Bushman). They are genetically kin, though not as close as researchers had expected. "San" is not what the Khoisan of Namibia call themselves. It is a term used among the Nama to indicate people who have no cattle; people of a lower social standing. "Koisan" in Japanese means "youngest daughter of an honored family" and this may provide a clue as to the original clan hierarchy of the Khoisan. Those without cattle were still family, but of a lower social status.

Notice the reddish skin tone of these Khoisan, an indicator of their genetic antiquity. The black tones came later with the arrival of the Bantu. There may be a connection between the San and the red Nubian Ainu, but more research needs to be done. There is evidence to suggest a connection between the Ainu of Northern Japan and the Micmac Ainu of Eastern Canada. Again more research needs to be done to solve the mystery of the widely dispersed Ainu.

The Ainu are at the center of Luigi Cavalli-Sforza's genetic distance chart, which is what would be expected of a people whose ancestors dispersed widely following major water systems. Today Ainu populations are found along the Nile, in Western China, in Northern Japan, and along the eastern seaboard of Canada.

The Khoisan-Japanese connection seems more probable when we consider the Arabic name for the San: Wakwak. The Sandawe (Tanzania) call the Bushmen Wanege. Wa was the earlier name for Japan and the word appears in the name Okinawa. Likely this is related to the Ainu word for water: Ainu: ワㇰカ [wakːa]. The African variant of Okinawa would be Jokinawah (akin to the Biblical names Joachin/Joktan?). W'b in Ancient Egyptian refers to the priest caste, the pure ones. Recent DNA studies have revealed that the Ainu of Hokkaido and the Ryukyuans of Okinawa have a closer genetic affinity than either group has to the Japanese. 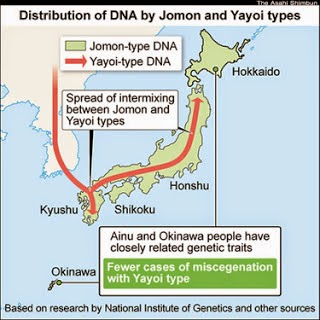 There are many connections between Japanese and African words. For example, the name Isahi appears to be a variant of Esau or Issa. Kishi appears to be a variant of Kish and Kush. Obito, the title for a regional chief in Japan, is related to the Edo (Africa)/Edomite (Southern Arabia) word for chief, which is Oba. The region of modern Tokyo was called Edo. The people of Benin in Africa call themselves Edo and their ruler is called Oba. The first ruler of Petra was the Horite ruler Obodas. These ancient rulers were said to have a reddish skin tone (as was the case with Esau and David). The ancient Greeks called Edom "Idumea" which means "land of red people."

A comparison on the Kata and Hebrew scripts reveals a connection that is likely explained by the fact that the earliest scripts were those used by priests attached to rulers over many regions worldwide. 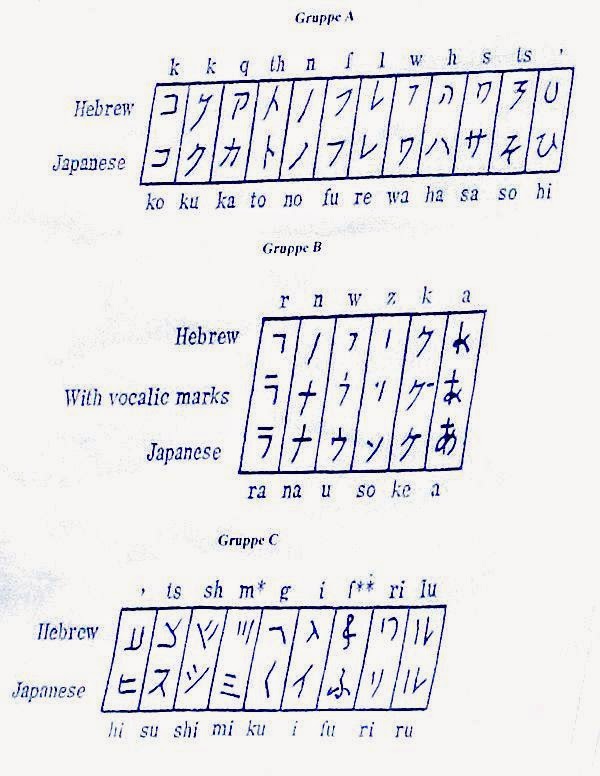 A Korean scribe called Wani Kishi is said to have brought Kata to Japan. It is used by the Ainu of Northern Japan. Japan's earliest known population was Ainu. The Kojiki indicates that Wani Kishi arrived sometime after 372, but before 375 AD. Kata was a priestly syllabic system, similar to Hebrew. Wa-kishi is an African term found among the Ba-Kaonde of Northern Rhodesia. It refers to the ancestors.

Note that Cavalli-Sforza's chart does not include Jews. Dr. Harry Ostrer, director of the human genetics program at the New York University School of Medicine, led one of the studies that compared the genetic makeup of Jewish populations from around the world with African populations. Ostrer found that modern Jewish populations have African ancestry. David Reich, associate professor of genetics at Harvard Medical School, explored further and found that Jews can attribute about 5 percent of their ancestry to sub-Saharan Africans. Where would they fit on Cavalli-Sforza's genetic distance chart? Were I to venture a guess, I would say the urheimat of the ancestors of the Jews - their "Horim" - is the Upper Nile, and that these ancestors were red Nubian Ainu. This is why a reddish skin tone in mentioned in association with Biblical figures like Esau and David.

Linguistic research has demonstrated that about 30 percent of the Proto-Semitic roots are cognates to Sub-Saharan roots, including Proto-Bantu roots. Many of these roots express ideas found among the ancient Kushites and the Horim (Horites). In his study of the relationship of ancient Egyptian and Bantu languages, Ferg Somo wrote:

Proto-Bantu played an active part at the time of the expansion of Proto-Afro-Asiatic speakers in the Rift Valley of East Africa. These Proto-Bantu speakers going through the savannah formed part of the migration to Egypt. The Bantu languages together with other indigenous languages fused together and became embedded to form the Proto-Egyptian language. It is for this reason that the Ancient Egyptian language contains a substantial amount of Proto-Bantu or Bantu roots.

The Bantu expansion into the region of the Upper Nile and the Great Rift Valley had already taken place by 1500 BC. This is evident from the images of Nubian captives from the time of Ramesses II (1303-1213 B.C.) These images show red and black Nubian captives. The black Nubians have Bantu features. As the two groups were fighting together, it appears that they had already formed a moeity. 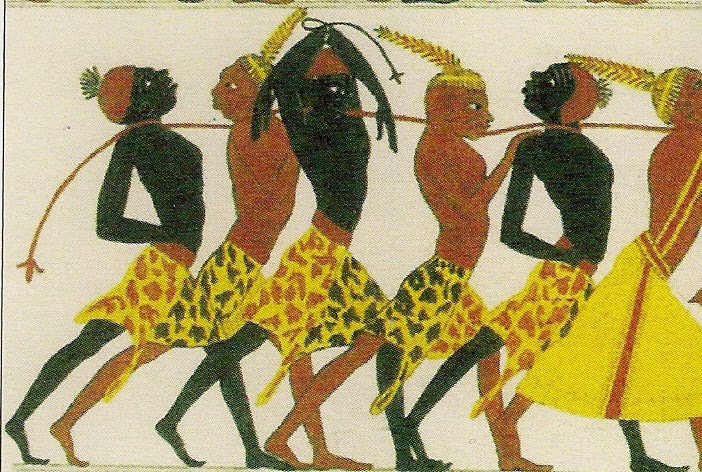 There is archaeological evidence of the Khoisan peoples in Africa for at least 60,000 years, though the genetic evidence indicates a much longer existence. They are characterized by considerable diversity in customs and regional dialects. Some Khoisan inhabit regions closer to the Horn of Africa. The Hadza and Sandawe languages in Tanzania are classified as Khoisan also. The Hadzabe once roamed freely with their cattle over the Great Rift Valley. Genetic research has shown that the Hadzabe split from other Click-speaking populations perhaps as early as 100,000 years ago, but definitely by 50,000 years ago. (Science, 27 Feb. 2004, p. 1320) 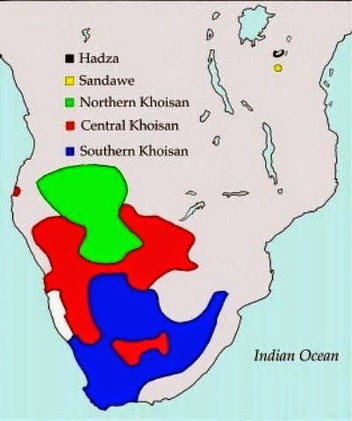 Before the 20th century, many Sandawe lived in tepee-like huts called "sandu." Today these are built only as temporary shelters at circumcision sites.

It is likely that the ancestors of the Khoisan and Ainu dispersed between 50,000 and 40,000 years ago. Clearly some would have been able to migrate following the coastline of Africa and the once inter-connected lake basins shown in the map (right). These water systems expanded and contracted with changing weather conditions throughout the Late Pleistocene (125,000-5,000 years ago). There is conclusive scientific evidence that humans dispersed out of Africa, following the routes of major water systems, at different times and from different points during the Late Pleistocene.


Genesis data pertaining to the Ainu

Among the Nilotic Sandawe are the Bisa, a small population of people who conform to the older ways. The Bisa call their light skin cattle ánaku, which means "to bleach in the sun." (Eric Ten Raa’s The Couth and the Uncouth: Ethnic, Social, and Linguistic Divisions among the Sandawe of Central Tanzania, p. 148) The singular form of the word is ának. This is the probable origin of the Biblical term Anakim for Abraham’s Ainu ancestors who had a lighter skin. They are called the "mighty men of old" in Genesis. The NPR attribution: "kings of the planet" rightly applies to them.

Biblical On (Heliopolis) on the Nile was originally an Ainu shrine city. The Ainu were seafarers and had a priestly script which they introduced to the lands where they traveled and settled. Ainu scribe-priests had a syllabic writing system, like Hebrew and Kata. 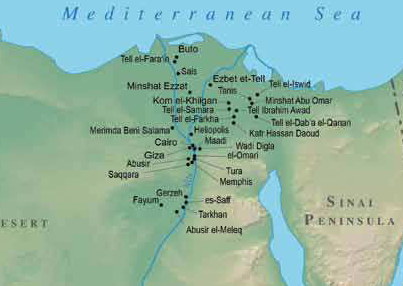 The importance of the Anu shrine city of Heliopolis is indicated by alignment of the pyramids of Giza, Abusir and Saqqara to the the obelisk of Heliopolis. See the map above. The enigmatic Joseph married the daughter of the priest of On. Likely, she was a distant cousin.