Three-Clan Confederations of the Bible

There are many three-clan confederations in the Bible. In I Chronicles 9:30 some are identified with the "priestly caste" responsible for mixing fragrant ointment. In I Chronicles 9 indicates that Jeiel of Gibeon had three sons: Abdon, Mikloth, and Ner. Ner was King Saul's paternal grandfather.

The twelve-tribe organization found in the Old Testament appears to have developed from the earlier three-clan confederations of the Hebrew ruler-priest caste, called "abrutu" in ancient Akkadian.

In his seminal work "The Scheme of the Twelve Tribes of Israel" (1930), Martin Noth showed that the Twelve Tribes of Israel did not exist prior to the covenant assembly at Shechem described in the book of Joshua. The Joshua passage shares with the Deuteronomist Historian a common concern with idolatry and the centralization of worship in Jerusalem. Yet, both place the covenant at Shechem at the location where God appeared to Abraham in Three Persons (Gen. 18). Here in reference to the Godhead, the number three speaks of oneness or unity. Likely, the twelve-clan confederation is a linking of four three-clan sets, and a natural development as the Hebrew populations grew and needed additional layers of organization for defense and for self-governance.


The introduction of this twelve-tribe theme is late and reflects the twelve lunar phases (likely what each clan's "degel" represents). The twelve-tribe organization relates to the month in which the various divisions of Hebrew warriors were to perform their service to the King. This is evident in 1 Chronicles 27:1-15:

1 As for the sons of Israel by their number, the heads of the paternal houses and the chiefs of the thousands and of the hundreds and their officers that were ministering to the king in every matter of the divisions of those that came in and that went out month by month for all the months of the year, each division was 24,000.

2 Over the first division of the first month there was Jashobeam the son of Zabdiel, and in his division there were 24,000.

3 Some of the sons of Perez the head of all the chiefs of the service groups were for the first month.
4 And over the division of the second month there was Dodai the Ahohite with his division, and Mikloth was the leader, and in his division there were 24,000.

5 The chief of the 3rd service group for the third month was Benaiah the son of Jehoiada the chief priest, and in his division there were 24,000.

6 This Benaiah was a mighty man of the 30 and over the 30; and [over] his division there was Ammizabad his son.

7 The 4th for the 4th month was Asahel, Joab's brother, and Zebadiah his son after him, and in his division there were 24,000.

8 The 5th chief for the 5th month was Shamhuth the Izrahite, and in his division there were 24,000.

10 The 7th for the 7th month was Helez the Pelonite of the sons of Ephraim, and in his division there were 24,000.

11 The 8th for the 8th month was Sibbecai the Hushathite of the Zerahites, and in his division there were 24,000.

12 The 9th for the 9th month was Abi-ezer the Anathothite of the Benjaminites, and in his division there were 24,000.

13 The 10th for the 10th month was Maharai the Netophathite of the Zerahites, and in his division there were 24,000.

14 The 11th for the 11th month was Benaiah the Pirathonite of the sons of Ephraim, and in his division there were 24,000.

The older three-clan confederations likewise served for mutual defense and the provision of priestly and levitical service in Jerusalem. This organization was based on the kinship of three sons. This is evident in 1 Chronicles 23:6-26:

6 David separated the Levites into divisions corresponding to the sons of Levi: Gershon, Kohath and Merari.

7 Belonging to the Gershonites: Ladan and Shimei.

8 The sons of Ladan: Jehiel the first, Zetham and Joel—three in all.

9 The sons of Shimei: Shelomoth, Haziel and Haran—three in all.

These were the heads of the families of Ladan.

10 And the sons of Shimei: Jahath, Ziza, Jeush and Beriah.

These were the sons of Shimei—four in all.

11 Jahath was the first and Ziza the second, but Jeush and Beriah did not have many sons; so they were counted as one family with one assignment.

12 The sons of Kohath:Amram, Izhar, Hebron and Uzziel—four in all.

13 The sons of Amram: Aaron and Moses (Korah, Amram's son by his cousin wife, is not listed here.)

Aaron was set apart, he and his descendants forever, to consecrate the most holy things, to offer sacrifices before the Lord, to minister before him and to pronounce blessings in his name forever.

14 The sons of Moses the man of God were counted as part of the tribe of Levi.

15 The sons of Moses: Gershom and Eliezer.

16 The descendants of Gershom: Shubael was the first.

17 The descendants of Eliezer: Rehabiah was the first. Eliezer had no other sons, but the sons of Rehabiah were very numerous.

18 The sons of Izhar: Shelomith was the first.

19 The sons of Hebron: Jeriah the first, Amariah the second, Jahaziel the third and Jekameam the fourth.

20 The sons of Uzziel: Micah the first and Ishiah the second.

21 The sons of Merari: Mahli and Mushi.

The sons of Mahli: Eleazar and Kish.

22 Eleazar died without having sons: he had only daughters. Their cousins, the sons of Kish, married them.

23 The sons of Mushi: Mahli, Eder and Jerimoth—three in all.

24 These were the descendants of Levi by their families—the heads of families as they were registered under their names and counted individually, that is, the workers twenty years old or more who served in the temple of the Lord.

25 For David had said, “Since the Lord, the God of Israel, has granted rest to his people and has come to dwell in Jerusalem forever,

26 the Levites no longer need to carry the tabernacle or any of the articles used in its service.”

Likewise, in Genesis 25:13-16. Ishmael is said to be the progenitor of twelve tribes: "Nebajoth; Kedar, Adbeel, Mibsam, Mishma, Dumah, Massa, Hadar, Tema, Jetur, Naphish, and Kedemah: These are the sons of Ishmael, and these are their names, by their towns, and by their castles; twelve princes according to their nations."

Jacob, a son of Isaac, was the progenitor of twelve Israelite tribes: Reuben, Simeon, Levi, Judah, Issachar, Zebuln, Dan, Naphati, Gad, Asshur, Joseph and Ben-Jamin. There is discrepancy on the number of Israelite tribes. Some count Dinah's line and some count Joseph's two sons Ephraim and Manassah.

Also there is an attempt to organize Esau into a twelve-tribe confederation in Genesis 36:40, but only eleven chiefs are listed, and two are women: Anah and Oholibamah. Genesis 36:24 lists Anah as a ‘son’ of Zibeon and her daughter Oholibamah is listed as an Edomite chief in Genesis 36:41. The attempt fails also because there are two named Esau. Esau the Elder was the father of Eliphaz. Esau the Younger had two wives. Basemath who bore Reuel, and Oholibamah who bore Jeush, Jaalam, and Korah (Genesis 36:1-9). These were the people of Seir, the Horite. They were Horite clans. Their organization appears to be that of three-clans, not twelve-tribes.

There is more evidence in the Bible for the three-clan organization than for the twelve-tribe organization. Often the rulers' names begin with Y, a solar cradle indicating divine appointment. Abraham's sons Yitzak (Isaac), Yishbak (Ishbak) and Yishmael (Ishmael) are an example. Here are some of the three-clan confederations listed in Scripture:

Among the Sara of Chad, Sudan and Somalia the confederation is comprised of the qir ka, the qin ka, and the qel ka. The Sara are descendants of the Sao, an earlier three-tribe confederation of warriors and kingdom builders. According to legend, there were "giants" (Anakim/People of Anak, a chief of Hebron) among them. Some of the Anakh appear to have made their way to Southern Europe and even the British Isles.

About 64% of modern European men (that is 2 out of 3) are descended from three Bronze Age males, possible brothers. That is the finding of a research team from the University of Leicester. Did these three males produced an enormous number of children or does this research confirm the existence of a 3-clan patrilineal confederation which practiced endogamy? If the latter is the case, this is confirmation of the kinship pattern of Abraham's ancestors in the R1b peoples who arrived in ancient Britain and Ireland. 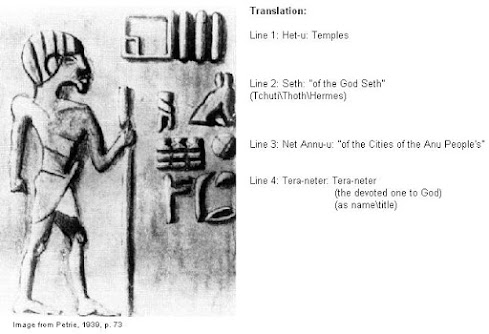 In the ancient world, the R1 Annu/Ainu/Anakh dispersed widely. The tera-neter tile (above) shows a Nilotic priest of the Sethite Hebrew who served at a temple of the Anu peoples. They built their shrines near water on mountains or elevated places. This was true along the Nile, in the Baltic region, in Southern China, and possibly in Northern Japan and Okinawa.
Such high place citadels are found also in Cornwall. The Cornish fortress of Tintagel or Trevena is an example. In Cornish, it is called Tre war Venydh, meaning "village on a mountain."

The Ravenna Cosmography, compiled around 700 AD from Roman material 300 years older, lists a route running westward into Cornwall. On this route is a place then called Duro-cornovio. The Latin Duro-cornovio corresponds to the British Celtic duno-Cornouio-n, which means "fortress of the Cornish people." However, the original name for Cornwall was Kernow, which is related to the words Karnak and Karnevo. Kar is a archaic root that refers to a circular place of ritual. Kar-nak refers to the rite of teeth removal among the ancient Nilotes.

The words duno [Duno-Cornouion] and duro [Duro-cornovio] are related to the word dar, which refers to a citadel or a fortress. The Aramaic word for fortress is derived from dar, and the Arabic word dayr refers to a monastery.

The Annu/Ainu (Anakh?) apparently were masters of stone monuments, tombs and mining operations. They built sacred circles in reverence to the Sun, the emblem of the Creator. Ki-kar refers to a circle as in Exodus 25:11: ki-kar za-hav ta-hor, meaning "circle of pure gold." In the Anchor Bible Commentary on Genesis, E.A. Speiser recognizes that kikar refers to a circle. 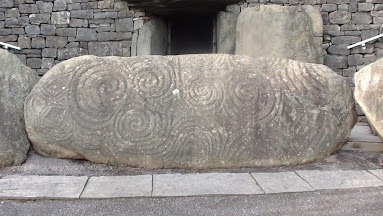 A motif consisting of three interlocked spirals, called a triskele, is carved into the rock near the main entrance of Newgrange in Ireland. Newgrange was constructed over 5,000 years ago (about 3,200 B.C.) during the Neolithic period, which makes it older than Stonehenge and Great Pyramids of Giza. Newgrange is a large circular mound with a stone passageway and chambers inside.

There is power in the number three, it was on the third day that the earth was exposed during creation, the one who was anointed as man' help was third, earth, man, woman. And a woman's pregnancy has three segments called trimester. Just like man was created on the sixth day, so can a baby survive outside the mothers womb in the sixth month. We know a lot of the Lord Jesus and the number three. At 30 he started the ministry, it lasted 3 years, on the third day he rose. An African stool always had three legs. But most interesting is the cooking fire. It always has three stones to hold the pot in place. The tabernacle had three places, court yard, holy place and most holy place. Oh there is a lot about THREE.

John points to the Three Witnesses: "Who is it that overcomes the world? Only he who believes that Jesus is the Son of God. This is the one who came by water and blood - Jesus Christ. He did not come by water only, but by water and blood. And it is the Spirit who testifies, because the Spirit is truth. For there are three that testify: the Spirit, the water and the blood; and the three are in agreement." (I John 5:5-8)