Fully Human.. from the beginning

Regular readers of Just Genesis know that I am an "old Earth" creationist. I also recognize the reality of genetic mutation and species adaptation. However, I find no physical support for the Darwinian theory of common ancestry of humans and apes. In fact, the material evidence supports the biblical assertion that humans are a "special creation" and were fully human from the beginning.

The bones from the cave in South Africa were recovered by the Rising Star Expedition. The bones were found in a chamber named Dinaledi, accessible through a narrow chute about a hundred yards from the entrance of the Rising Star Cave. The cavern in which the fossils were found has only fine sediment and no evidence of water transport of material from any outside source.

Parts of the skeletons resemble modern human anatomy while other skeletal remains resemble the australopiths, like Lucy. In other words, this burial pit contained the remains of people who ranged in appearance about as much as modern humans.The bones/bodies were deposited over “some period of time.” 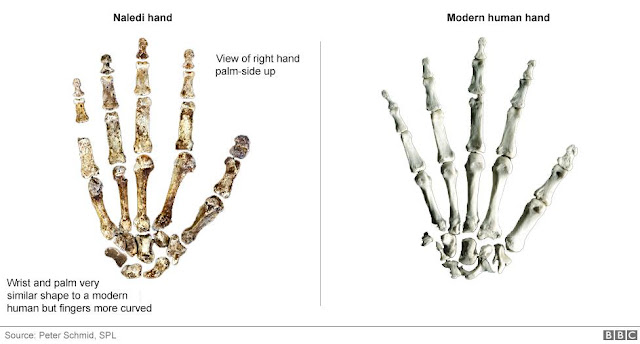 This find is being presented as a "new branch" of homo, called Homo naledi. These researchers do not consider Lucy and her kin to be fully human, though there is much evidence to suggest so. They hang a great deal on the size of brain cavity, though this is not an indicator of complexity of thought. In this view, H. naledi is slightly more human than the A. australopithecine and slightly less human than modern humans. Again this is based on the size of the brain cavity. That of H. naledi is less than half that of the average modern human skull, but proportional to the rest of the body. The 1500 bones and bone fragments represent at least 15 individuals. The adults were about 5 feet tall.

The cave burial of so many archaic humans suggests these people practiced ritual burial. No stone tools, clothing or other artifacts have been found in this burial site. There are numerous sets of bones from multiple individuals of different ages and sexes. There are many more bones awaiting further excavation.

Next week there is to be a 2-hour PBS-Nova presentation which will address these two years of research. It will be interesting to see how this is presented.

Jeffrey Schwartz thinks that the H. naledi remains represent two or more different species. He makes his case in Newsweek: “Why the Homo Naledi Discovery May Not Be Quite What it Seems”. On the other hand, John Hawks states that "The variation within the collection is not high, it is extraordinarily low." Hawks reports: "Homo naledi has a mosaic of features that include some that compare most closely to more primitive australopiths, and others that compare more closely to Homo. How do we know that this is one species rather than a jumble of species mixed together? Simple: every feature that is repeated in the sample is nearly identical in all individuals that preserve it."

RE: "It will be interesting to see how this is presented.
Archaic humans or sub-human evolving to modern human?"

My money is on them promoting the latter theory. It would be interesting to see if they tackle the whole sterility conundrum that often accompanies hybrid organisms. They keep reminding us that we have a little bit of Neanderthal in us, e.g., but they talk about the hybridization of these two species [sic] as if it's perfectly within the realm of mathematical probability.

I find myself enjoying some of PBS' shows (e.g., Nova and Rob Kuhn) in spite of my intense desire to pull federal funding from such things. On the other hand, I notice some things about their science and politics that supports statist narratives.

You can read more about the Rising Star Expedition at John Hawks' weblog: http://johnhawks.net/

Hawks believes that 200,000 years ago Homo sapiens [modern humans] appeared on the African landscape. He writes, "While scientists have long imagined eastern Africa as a real-life Garden of Eden, the latest research suggests humans evolved in many places across the continent at the same time."

Thus we have 200,000+ human fossil remains in Ethiopia, Kenya, Cameroon, near Paleo lakes in Africa, and South Africa.

That's pretty cool how that can happen sometimes. The other day, e.g., my neighbor was taking out several bags of empty beer cans for recycling. I remarked how amazed I was that he opened and drank all of them simultaneously. The look on his face shifted from jovial to sort of puzzled, and then a flicker of fear ran across his brow. The he was short with me, almost as if he was protecting something. My educated guess is that he was still not quite lucid from all the beer he consumed.

Several bags of empty beer cans... and he drank them all himself? No party over the weekend? A modern Neanderthal with a hangover.

The fact that modern humans were already dispersed across the African continent 200,000 years ago is very telling, don't you think? It doesn't refute the evidence of their ancestors being from the Garden of eastern Africa (the Nile Valley) because those fully human archaic ancestors lived 3 million years ago.

I believe this point of view it Biblically supportable.

What exactly is a huminoid animal?

Human is related to the word humus, dirt. This idea about humans being created from teh dust/dirt/humus predates modern languages. It was already evident in the Proto-Indo-European root for the word for human: *peh₂rs- person

The Proto-Indo-European root for sun was *sóh₂wl̥ and Man made in the image of the Creator, whose emblem was the sun, was called *wiHrós. The o is a sun symbol. Hr refers to Horus as a man.

I'm not sure what you don't understand about what I said. A humaniod animal is a human like animal with out the mysterious spark given us that makes us fully Human.

What is "Fully Human"?

Therianthropic legends (e.g., lychanthropy, Silkies, Valkaries the Skinwalkers of Native Americans) seem to abound in many cultures. However such legends don't seem to resonate with the Genesis assertion that humankind was formed from inanimate material.

The odd thing about the assertion that "dust of the ground" refers to an "animal, pre-human progenitor," (to borrow prose from an earlier controversy) is that the assertion doesn't seem to be supported by either narrative - Not the Genesis narrative, and certainly not the Therianthropic legends.

Did you watch the Nova program last night? I thought the most provocative point made is that the Tree of Life metaphor is inadequate and actually interferes with our understanding of the history of life on this planet.

But they didn't suggest an alternative metaphor, just sketchy possibilities.

Amazing that anyone suggested the possibility that the branch theory with common ancestry of apes and humans is flawed! Time for a hypothesis that actually aligns with the physical evidence. The Bible presents a good explanation: human were a special creation, appearing suddenly and fully human from the beginning on Earth about 4 million years ago.

Jay, consider how primitive people think. A person dies and the body decomposes. Later what remains of the body resembles dust or ashes. "Remember that you are dust..." "Ashes to ashes, dust to dust..." One of the humbling reminders of our mortality comes at Ash Wednesday.

Now connect that observation to the color of the dirt along the Upper Nile. It is reddish brown. Remember that Abraham's Nilo-Saharan ancestors considered Adam (the red man) their progenitor. See this: http://jandyongenesis.blogspot.com/2015/01/adam-was-red-man.html

I know they managed to stay around for millions of years without wiping themselves out and actually making something out of themselves. They couldn't therefore, be a bunch of idiots.

I know they were more right about some things (e.g., that we are a special creation) than people who live now who have IQ's over 140.

I know they were scientifically wrong but poetically right about some things, such as Darkness. I don't know if they made such distinctions, or even if it mattered to them, or if it should have mattered. And that really leaves me in a quandary, because if such things matter to me, and I don't know if it mattered to them, how can I even begin to understand them? And failing that, how can I maintain hope that my progeny thrive for millions of years, like they did?

It's a little scary.

I suppose me and mine need a ruler, a special ruler.

The hope for a Righteous Ruler (Messiah) is natural since all peoples, clans, communities need good leaders. However, this hope goes beyond survival. It anticipates total victory through a Divine Overcomer who defeat death and who leads His own into an eternal kingdom.

Primitive thought takes what is observed in the order of creation (nature) as fact, not science. The perspective is that of humans on Earth. The Sun appears to rise and set. The seasons have a fixed pattern. Humans are either male or female. Humans reproduce only humans. Plants reproduce only plants. Today philosophers call this "primitive phenomenology." It is much less speculative than most modern science, especially Darwinian speculation about common ancestry and natural selection.

When He comes, our glorious King
All His ransomed home to bring
Then anew this song we’ll sing
Hallelujah, what a Savior!

All this fretting about human origins is no mystery to Him!