Genesis and the Stone Age

During the Stone Age the primary material used for tools and architecture was stone. People crafted tools from stone and build structures such as tombs and temples. This was a very long period of time during which human populations dispersed across much of the Earth. The Stone Age lasted roughly 3.4 million years and ended about 2500 BC (the time of Abraham's grandfather, Nahor the Elder).

Early stone tools include sharp-edged flakes, flake fragments, and cobbles dated to between 2.5 and 2.6 million years. These were discovered at three sites along the Gona River in the Afar region of Ethiopia. Similar stone tools, known as Oldowan, have been found at Omo in southern Ethiopia, at Lokalalei in northern Kenya, and at Hadar, five miles east of the Gona River study area.

One of the oldest known stone working sites is located at Kathu in South Africa. Here archaeologists collected many thousands of stone tools and products of tool making in a few sample pits over a several acres. The archaeologists estimated that there are on average 900 artifacts per 100x100x10 cm volume of material in this area with much of the area up to 2 meters deep in artifact rich soils. This high concentration of stone artifacts, along with available source rock in nearby outcrops, suggests that this was a tool making center between 800,000 and 500,000 years ago.

Stone Age peoples crafted tools from stone and built tombs and temples using stone. Temples typically had many stone pillars such as those shown at the temple entrance below. 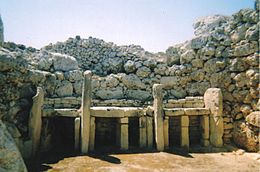 The two Ġgantija temples in Gozo, on the island of Malta, are some of the world's oldest free-standing stone structures. They were constructed during the Neolithic period (c. 3600–2500 BC). Other ancient temples include those found at Göbekli Tepe and Nekhen. Nekhen (called Hierakonpolis by the Greeks), is the oldest temple known to have association with Abraham's ancestors. The temple was located on the Nile, making it easy for temple officials to weigh and measure goods and assess tolls on the vessels that docked there.

Rulers at Nekhen acquired exotic goods and animals from central Africa and Afghanistan 4000 years ago. Nobles were buried with red ochre at Nekhen. At Tomb 100 there are two boats painted on the walls. Tomb 23, discovered at in 2005, is the largest burial structure from the Naqada II period (c.3500-3200 BC).

Typically the shrine cities of the ancient world were built near major water systems such as rivers and lakes. One example in the Bible is the shrine city of On (Genesis 41:45). On was called Heliopolis by the Greeks. Heliopolis means "city of the Sun." Plutarch wrote that the “priests of the Sun at Heliopolis never carry wine into their temples, for they regard it as indecent for those who are devoted to the service of any god to indulge in the drinking of wine whilst they are under the immediate inspection of their Lord and King. The priests of the other deities are not so scrupulous in this respect, for they use it, though sparingly.”

The people who lived at Biblical On called it Iunu, which means "place of pillars." Plato, who studied under a Horite priest for thirteen years, wrote "Tell me of the God of On, which was, is and shall be."

Heliopolis was the geodetic center of Egypt. The pyramid triads at Giza, Abusir and Saqqara were aligned to the obelisk at On. The shrine city of Baalbek in Lebanon, with its massive stones, also aligned to On.

Joseph married Asenath, the daughter of a priest of Heliopolis. Study of the Heliopolitan cosmogony makes it apparent that Heliopolis was conceived as the sacred center of the primeval ocean, called Nun. The many pillars of the temple symbolized the connection between the waters below and the waters above (Gen. 1:7). It is likely that Joshua, a great Hebrew leader, belonged to a ruler-priest family associated with On because he was a son of Nun (Numbers 11:28).

Usually, shrine cities were built at higher elevations to make it easier to defend the city against enemy attacks. In the Bible these ancient cities are called "the high places" and they are criticized for some religious practices that were not pleasing to the Creator.

At some high elevations the ancient stone workers constructed circles of standing stones. These have been found in many parts of the ancient world. They were places of religious ceremony linked to astronomical events. One of the most famous sites in the world is Stonehenge in Wiltshire, England. Here visitors from around the world are able to see the remains of a circle of standing stones set within earthworks.
The oldest known stone circles date to 175,000 years ago and were formed inside the Bruniquel cave in southwestern France.

In western Europe the tall upright stones erected in prehistoric times are called menhirs. In Sardinia, 200 menhirs have been identified in the area of the island's geographic center. These date between the late Neolithic (3200-2800 BC) and the Eneolithic (2800-1800 BC). Stone circles and megaliths also have been found in Senegal and Gambia. These date to the 3rd century BC.
Related reading: Why Nekhen is Anthropologically Significant; The Pillars of Solomon's Temple; Stone Work of the Ancient World; The Tool Makers of Kathu,Circumcision and Standing Stones in the Judean Hills; Henges and Rondel Enclosures; Lithic Landscapes: Early Human Impact from Stone Tool Production on the Central Saharan Environment
Posted by Alice C. Linsley at 7:54 AM