Genesis on Humans and Apes 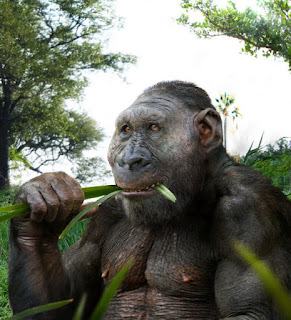 
Readers of Just Genesis know that I am an "old Earth" creationist. I acknowledge the reality of genetic mutation and species adaptation. However, I find no support in anthropology for the Darwinian theory of common ancestry of humans and apes. In fact, the material evidence tends to support the Biblical assertion that humans are a "special creation" and were fully human from the beginning.

In Genesis 1:11-25 we are told that God created the first creatures “according to their kinds" and this would include apes. However, the text never applies the term "kind" to humans who are made in the “image” of God. This indicates that humans are unique among Earth's creatures. The Bible rejects the theory that humans represent an evolutionary advancement over apes.

Much has been made of the genetic similarity between humans and apes, as if this proves they have common ancestry. The DNA code uses letters to specify the exact sequence of amino acids that are to be used to construct a protein. Human and chimp DNA align up to a point. The difference between the genetic code of apes and humans is the T (tau) or Cross at the center.

Genesis does not speak of humans being "according to their own kind" because we are supposed to be imaging God and that reality is centrally and deeply planted in our genetic code.

The T is one of the oldest known marks made by humans and it always refers to what is above us: the heavens, the mountain top, the solar arc, and the Creator. The mark could represent human speculation about our origins, a matter far above our heads.

Very old bones found deep in a cave in South Africa show the full range of human physical features, but because these are far older than 10,000 years, Young-Earth Creationists argue, contrary to all the evidence, that these are ape bones. How pathetic! The bones found in the Dinaledi Chamber represent the largest collection of hominin bones found to date in Africa. The bones are of 15 individuals, including infants, children and adults. (For more, read about the Rising Star Expedition.)