The Unveiling of Joseph

Joseph's rise to power came when he was recognized as a seer, that is, one who opens dreams and visions. In Genesis he is called abrikku; which is related to the Akkadian abarakku, which means grand vizier (Delitzsch, Hebrew Language Viewed in the Light of Assyrian Research, p. 26). There is a relationship to the Sumerian abrilc (seer) and the Latin aperire (to open).

The term abrikku is also related the the Akkadian word for priest, which is abru. Joseph was of the Horite Hebrew ruler-priest caste. Some members of this caste were known as prophets. Asaph was the chief of the Temple musicians and he prophesied in song, a common practice in the ancient world.

In ancient Egypt, dream interpretation was the domain of priests who trained in this "science" in order to gain advancement in the priestly ranks. Seer-priests studied manuals of hundreds of dream interpretations. This was a way for priests to increase their incomes, and this probably motivated many to excel in dream interpretation. Apparently, many of the royal seers were not very good at it. Genesis 41:8 tells us that they failed to interpret the dream that Pharaoh had repeatedly. That is how Joseph came to prominence.

Joseph's wisdom comes from his reliance on the Lord's revelation of the meaning. When asked by Pharaoh if he can explain the meaning of the ruler's dream, Joseph answered the Pharaoh: "It is not in me; God will give Pharaoh a favorable answer." (Gen. 41:16)

Given that only circumcised men were permitted an audience with Pharaoh, it is likely that Pharaoh was already well aware that Joseph as a Hebrew of the Horite ruler-priest caste. This explains the ruler's great favor toward Joseph and his rapid elevation to abrikku/abarakku.

In ancient Egypt the high ranking rulers were not seen without their royal garb and instruments of authority. Joseph's appearance as "lord" of all of Pharaoh's house and "a ruler throughout all the land of Egypt" (grand vizier) would have been such that his brothers would not have recognized him. Joseph was clean-shaven, whereas his Horite Hebrew brothers had long hair and beards. His head was shaved as a "korah" or ruler-priest. He wore the signet ring given him by Pharaoh, a gold chain, and a garment of fine linen with fringes, such as those worn by the ruler=priest caste.

The narrative in Genesis 45:1-8 is touching and intimate.


Then Joseph could not restrain himself before all those who stood by him, and he cried out, “Make everyone go out from me!” So no one stood with him while Joseph made himself known to his brothers. And he wept aloud, and the Egyptians and the house of Pharaoh heard it.

Then Joseph said to his brothers, “I am Joseph; does my father still live?” But his brothers could not answer him, for they were dismayed in his presence. And Joseph said to his brothers, “Please come near to me.” So they came near. Then he said: “I am Joseph your brother, whom you sold into Egypt. But now, do not therefore be grieved or angry with yourselves because you sold me here; for God sent me before you to preserve life. For these two years the famine has been in the land, and there are still five years in which there will be neither plowing nor harvesting. And God sent me before you to preserve a posterity for you in the earth, and to save your lives by a great deliverance. So now it was not you who sent me here, but God; and He has made me a father to Pharaoh, and lord of all his house, and a ruler throughout all the land of Egypt.


Only the personal servant of the ruler knew intimate details of the ruler's daily ablutions. This servant helped the ruler to dress in elaborate style consistent with the ruler's rank. The lower ranking officials wore loincloths. Gold discs were worn on the chest and attached in the back. The men wore a nemes, a blue and gold stripped head-cloth falling down both sides of the head, the front of each shoulder and the back. Another headdress worn by royal officials was the khat (shown below). 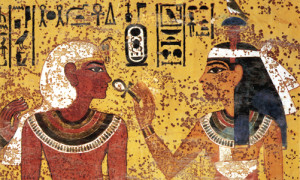 The ruler-priests wore leopard skins as a sign of their royal priesthood.

Joseph married Asenath, daughter of the "priest of On" on the Lower Nile (Gen. 41:45).  On was also called "Heliopolis" or City of the Sun. The people who lived in Heliopolis called the shrine city Innu/Iunu, which means place of pillars.

Asenath's father was Putiphar or Potiphera. This is a title composed of the words pu and tifra. Putifra in ancient Egyptian means "this order" and likely relates to the order of Horite Hebrew priests. The stela of Putiphar speaks of Putiphar as the "son of Horus, may He live forever."

Likely, she was Joseph's patrilineal cousin.

Unless, Potiphar, like Pharoah was a title, not a specific person. Poti-PHAR, PHAR-oah. ?

Potiphar would have been a contemporary of Jacob, not Joseph. The name is a title, as is evident from the Potiphar Stela in the Cairo Museum. It dates to the 21st Dynasty (ca. 1070–945 BC). The stela has this designation "Putiphar son of Ankh-Hor" and indicates that Potifer was among the Horites, the priest devotees of Re, Horus, and Hathor.

The more likely form of the title is Po-tifra, based on a reference in Proverbs 8:33 - "Listen to my instruction and become wise. Don't change the order." Rabbi Ibn Erza says that al-tifra-u means "don't change the order." This makes sense, giving the context. So Potifra suggests a priest whose responsibility it is not to change the received tradition.

The title Pharoah refers to the ruler's house and dynasty. It is derived from the very ancient root pr (piru), meaning house. O-piru means Sun house. Here the O is a solar image.

I'm trying to understand what you meant by your Joseph married his cousin comment.

Do you mean one Jacob's brothers move to Egypt and assumed the office of Potiphar?

I don't know how else he could have married his cousin on his father's side.

Where did this idea come from?

Abraham's ruler status was recognized by Pharaoh. That is the only way that Abraham could have had a personal audience with Pharaoh. All the rulers of the Nile followed the religion of Horus. Each received a Horus name as part of their many titles when they ascended to the throne.

Abraham had a face-to-face audience with Pharaoh, the most powerful ruler on earth at that time. This tell us that Abraham was of a recognized royal family. Genesis indicates that his father, Terah, ruled over a territory that extended between Ur and Haran in Mesopotamia. However, Terah was a descendant of Nimrod, a Kushite. Nimrod was the son the Nilotic ruler, Kush (Genesis 10:8). As the word "Terah" means "priest" we may assume that Abraham was of the Horite ruler-priest lineage. These rulers married half-sisters (the first wife) and patrilineal cousins (the second wife). The pattern is explained here: http://jandyongenesis.blogspot.com/2008/06/biblical-kinship-symmetrical-pattern.html