The Binary Worldview of the Bible

A much overlooked feature of the biblical worldview is its binary logic. Some refer to this as the Semitic block logic. This thinking is comfortable with paradox, and approaches truth as concrete and tangible. This logic moves beyond "either-or" to "both-and" while maintaining distinctions between the entities of the binary set.
The binary set of Male-Female provides an example. The entities of this set are by nature quite different and yet closely related. They define humanity, not as either-or, but as both-and. From their union comes more or their kind, both male and female children. 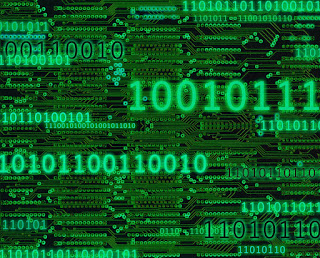 The binary distinctions established by God at the beginning testify to the highest authority. Only the Supreme Being could call forth matter from nothing, separate light from darkness, quell the chaotic waters, and separate the dry land and the sea. From what was once a cosmic ocean there emerged dry land, called the "pillars" of God, suggesting extrusive volcanism.  The sequence of logic moves toward the Creator's act of separating or creating distinctions. The earth is established on pillars and the emerging peaks are the Creator's pillars. Samuel 2:8 states that these "pillars of the earth" belong to God. (Also see Psalm 75:2,3; and Job 9:6.)

There is the distinction of earth and heaven, yet this binary set points to something beyond itself.


The Lord by wisdom hath founded the earth; by understanding hath he established the heavens. By his knowledge the depths are broken up, and the clouds drop down the dew. (Proverbs 3:19, 20)

In terms of organic life there are distinctions between plants and animals, and between plants and humans, and between animals and humans. The separateness of these is so obvious that we hardly stop to consider it. Long before Aristotle, people observed that certain things belong together; that objects in nature can be classified into groups, and there are hierarchies. Horses eat grass. Grass does not eat horses. There is a fixed order that testifies to the divine Hand in creation.

Binary sets are concrete: Creator-creature, life-death, male-female, night-day, sea-land, heaven-earth, east-west, etc. In the Hebrew way of thinking these attest to fixed patterns in Nature and stand as a witness to the Creator's existence, divine nature, and eternal power. The Apostle Paul speaks of this in Romans 1:19, 20:


For what may be known about God is plain to them, because God has made it plain to them. For since the creation of the world God’s invisible qualities, His eternal power and divine nature, have been clearly seen, being understood from His workmanship, so that men are without excuse.

Unlike dualism, where the entities are equal, one entity in the binary set is superior in some visible way to the other. The male human is larger and stronger than the female. Genesis 1:6 speaks of the Sun as the greater light that rules the day. In the ancient world objects commonly were perceived as reflecting male or female attributes and often this was implied by the size. This is evident in some languages today. For example, the Spanish word for ship is el barco (masculine), but the Spanish word for boat is la barca (feminine). The larger in size is assigned masculine gender. A pond is el charco (masculine), but a puddle is la charca (feminine).

In the biblical view, the Sun and the Moon are not equals (dualism) because the Sun is the "greater light" and the Moon reflects the greater light (refulgence). This is the main distinction between the binary logic of the Bible and the dualism of Asian religions that developed in the Axial Age.

In Genesis the Sun - Shemesh - is masculine, as in Genesis 19:23. In the Sumerian language, the word for the Sun was Utu, and he is called a “son” of Nanna and Ningal. In the Akkadian, the Creator is sometimes called Aplu, a compound word that speaks of God as father (ap/appa/abba) with the masculine affix lu.

Among Abraham’s Nilotic ancestors, the Creator was called Ra, and described as the "father" of Horus. (The Ancient Egyptian word for father is re.) "God Father and God Son" is an emphatically masculine designation. It is apparent in Psalm 19:4-6:


…the sun, which is as a bridegroom coming out of his chamber; It rejoices as a strong man to run his course. Its rising is from one end of the heavens, And its circuit to the other end of them; And there is nothing hidden from its heat.

The Sun was the emblem of the Creator among the biblical Hebrew, and the Sun was regarded as masculine in essence. In Genesis, the sun and moon are a binary set, but the Sun is the greater light that rules the day. The greater light speaks of God, the light that the wise pursue.

In review, consider the concrete language employed in this discussion: water, land, pillars, sun, moon, man, woman, father and son. The concrete language of the Bible reflects the concrete thinking of the ancient Semitic world. God's creation reveals complex binary sets and hierarchies that introduce new things. That Word spoken at the beginning hangs still in the air and continues to generate and sustain life.
The Structuralist anthropologist Claude Levi-Strauss observed the binary logic of primitive tribes in South America. The Deconstructionist (Anti-Structuralist) philosopher Jacques Derrida could not escape the binary reality either. Levi-Strauss based his conclusion on empirical observation of humans; Derrida on analysis of human language.
I am of the opinion that all complexity emerges from the binary order in creation. I am able to use my computer to write this blog post because of the foundational operation of binary language. This seems true in assessment of the Cambrian Explosion which appears to be been triggered by the emergence of binary symmetrical features.